Everyone Counts: The 2020 U.S. Census Starts this Spring 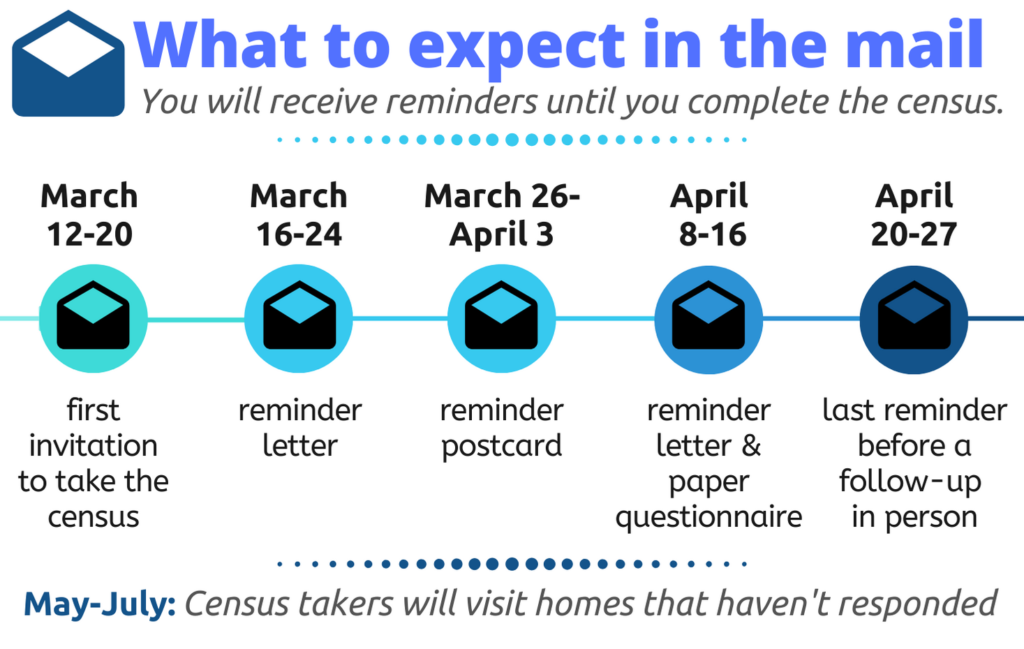 This article originally appeared in the March 2020 edition of Senior Scope. Article and graphic by Seth Thomas.

This year the federal government will once again count every citizen in the United States – all 330 million of us. The census, mandated as part of the constitution, occurs every ten years and factors into everything from how voting districts are drawn to highway repair.

Making sure that everyone counts is a complicated task given the sheer size of the country and the large (and highly mobile) population. But census data is critical in determining the state’s share of $675 billion a year in federal funding, which impacts numerous programs, including Medicaid, SNAP and Head Start programs.

“It also determines the number of seats each state has in the U.S. House of Representatives,” said Jose Da Cunha, a partnership specialist with the U.S. Census Bureau. Massachusetts has lost seats in three of the past four census counts, dropping from 12 congressional seats in 1980 to the current count of nine.

“If we work hard to make sure that everybody is counted, we won’t lose a seat,” said Da Cunha.

The 2010 Census was the most expensive in the country’s history (approximately $13 billion), and this year the government is hoping to cut costs by encouraging citizens to fill out the questionnaire over the phone or, for the first time, via the Internet. The Bureau has been preparing for this moment for years to accommodate the risks involved with moving the census to the web.

“The data is safe,” said Da Cunha. “Once citizens start inputting information online, it automatically gets encrypted. The information they fill in, whether it’s online or by phone, it’s protected. Once the information is transmitted to the Census Bureau database, there are firewalls in place.”

You do not need a powerful, high-end computer to complete the census. However, you will want to make sure your computer is up-to-date because computer system updates often include the latest security protection.

You can expect to receive the first notice in the mail by mid-March, and at that time, you can fill out the census over the phone or online. Some households will receive a print version of the census at this time. In the weeks that follow, if you have not yet completed the census, you can expect more reminders in the mail. Between April 8 and 16, a print copy of the census will be mailed to those who have yet to complete it.

If you still have not completed the census by the end of April, a census taker will show up at your door starting in mid-May. The entire process should be complete by the end of July, and the results will be available on Dec. 31.

The questionnaire will ask you to identify the number of people living in your household on April 1, 2020, as well as basic details about those residents, including age, sex, race and ethnicity. Last year, the Supreme Court had blocked the Trump administration from adding a citizenship question to the 2020 census.

“If you live here, we want to count you. The Census doesn’t look at your [green card] status,” said Da Cunha. He added that the U.S. Census Bureau is mandated by federal law to keep all information obtained confidential, and the data they collect cannot be shared with other government agencies.

The Census Bureau will also never ask you for your full social security number, your bank account or credit card numbers, nor will they ask for monetary donations.

A press release from District Attorney Thomas Quinn’s office notes that scammers may try to pose as census takers in an effort to acquire personal data, which they will use to commit identity theft and other frauds. But you can protect yourself by knowing how to identify a census taker, should they show up at your door.

A census worker will arrive at your home wearing an ID badge. The badge should show the person’s photo, a U.S. Department of Commerce watermark and an expiration date. The person may also be traveling with a bag and laptop that should display the Census Bureau logo.

And remember: if you don’t want someone from the Census Bureau knocking on your door, fill out the census by phone or via the Internet as soon as you receive the first alert in the mail this March.