Dianna Couto, chair of the art show committee, stands next to her painting of a ship. More than 100 paintings were on display at this year’s Acushnet Art Show.

This article originally appeared in the July 2019 edition of Senior Scope. Article and photos by Seth Thomas.

Oil paintings, colorful masks and one giant metallic pig filled the Acushnet Council on Aging’s activity room during the Acushnet Art Show. The show, now in its 60th year, hosted dozens of artists during the first weekend of June.

New Bedford High School art teacher Walter Owen had the idea for the show in the late ‘50s. The show initially launched as a week-long event, and it cemented its place in Acushnet when it became part of the town’s centennial celebration in 1960. Today the show is held over a weekend in late spring.

“I don’t know anything else in Acushnet that’s been around this long besides the Acushnet Apple Peach Festival and Pop Casey’s,” said Dianna Couto, the chair of the art show committee, with a laugh. “I think we fit right in there because we’re like an icon.”

Any Acushnet resident age 16 and up can contribute work, but this year the committee sought submissions from the surrounding community.

“It’s an Acushnet Art Show, but we’ve been having trouble getting enough people to participate,” said Ron Gaudette, a board member of the art show. “So we opened it up to the art classes at the Freetown and Rochester Councils on Aging.”

More than 100 works were on display, and they were divided into five categories: watercolor paintings, oil and acrylic paintings, photography, mixed media, and crafts. Prizes were awarded to the top three artists in each category and art books and a painting were raffled off during the weekend. 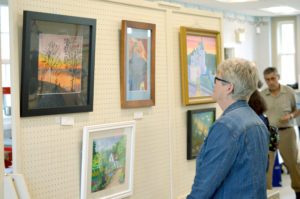 The show also incorporated pieces created by students from Ford Middle School who were too young to submit work to the main show.

“It’s great. I love to see the younger kids’ work,” said Gaudette. “We have some great artists for a small town.”

Though a steady stream of patrons attended the show throughout the weekend, event organizers remain concerned that their community art show is dropping off in popularity.

“I would hate to see the show go away,” said Couto, who has submitted paintings since 1974. “I entered for years, and then I became part of the committee. Little did I know I’d end up holding the show together.”

Both Couto and Gaudette hope that younger people might take an interest in the show and take it over some day.

“I know when I go to an art show, I get inspired to paint. Hopefully, they’ll see this show and get inspired,” said Couto.