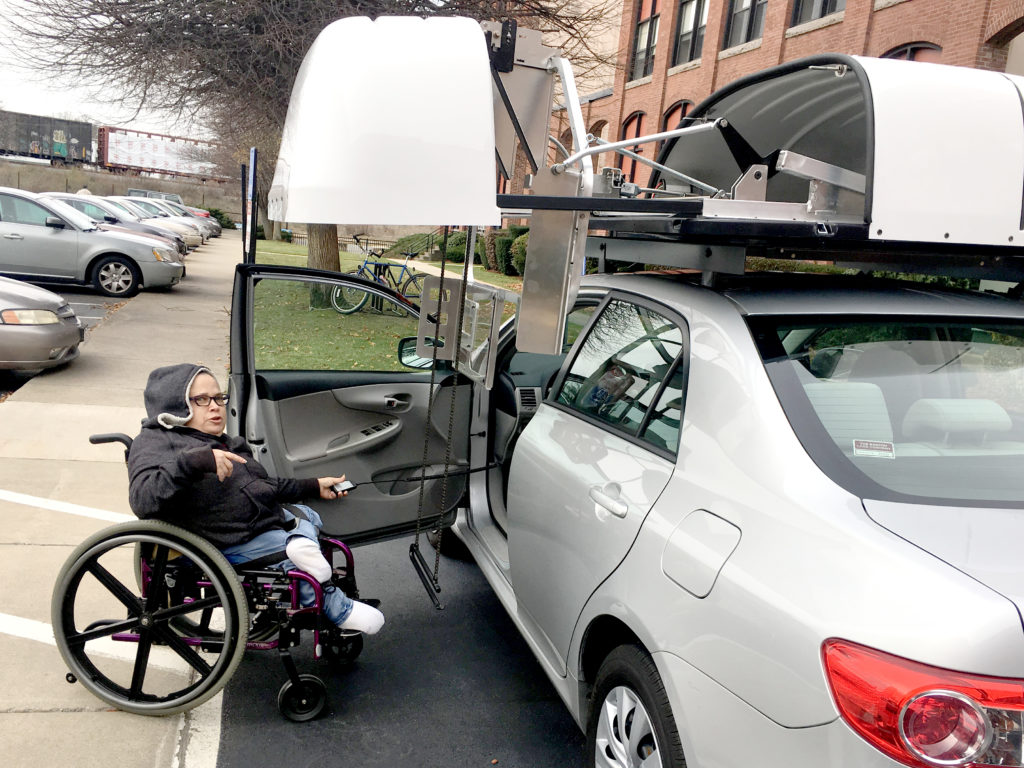 Marie Houde got by with a little help from her friends. After her car was totaled this past summer — including the adaptive equipment that went with it, she received mediation from New Bedford’s Local Consumer Program to help secure the funds for replacement equipment. She’ll soon be back on the road. Houde (pictured) demonstrates the modifications to her car in front of her home at Taber Mill on Nov. 15.

This article originally appeared in the December 2018 edition of Senior Scope. Article and photo by Seth Thomas.

Marie Houde remembers life before she could drive. To get to the grocery store or to schedule a doctor’s appointment meant coordinating with others, and her ability to arrive at all depended solely on other people.

When she applied for her driver’s license in 2004, the instructor had her drive on a school bus seat so she could see over the steering wheel, and after the test, the instructor gave her the seat. It was one component of her adaptive vehicle, which enabled her to drive despite her disability.

However, after 14 years on the road, her ticket to freedom was taken away. An aide borrowed her vehicle for an errand over this past summer and got into an accident that totaled the car and left the adaptive modifications inoperable.

“The car that I had was in perfectly good condition,” said Houde. “I kept up with oil changes, everything. It ran perfectly fine. The equipment was perfectly fine, too. In one fell swoop, it was gone.”

In the months since, she reverted back to the days of needing to ask others for transportation. Making matters worse, her insurance company only covered the cost of the car, not the adaptive equipment.

“Once I got my license and my car, it was great because I could get into my car and go whenever I wanted to,” she said. “When the accident happened, it went right back to depending on people for rides. I hated it.”

One of Houde’s neighbors at Taber Mill, where she’s lived for eight years, caught wind of the situation and wanted to step in. The friend, who is on the New Bedford Council on Aging Advisory Board and did not wish to be named, asked around to see if an outside mediator could get involved, so he contacted New Bedford’s Council on Aging.

“When consumers have had an issue with a particular company, LCP goes in and advocates for the client,” said Lee.

The New Bedford Local Consumer Program, which operates out of the City’s Department of Community Services, provides information and mediation to consumers. The program is funded through and partners with the Commonwealth of Massachusetts Office of the Attorney General to act as an intermediary between consumers and the business to try to reach a solution. The program is free and open to residents living in more than 20 towns and cities in the greater New Bedford region.

The program can help with anything from used car complaints to scams that target seniors. They also operate a program that offers face-to-face mediation.

“I received a message about Ms. Houde and the fact that she had a situation with her insurance agency. She was unaware that, when she cashed the check for a car, it didn’t include the equipment that she needs to get around,” said Cheryl Duclos, a mediator with the Department of Community Services.

Duclos sent the information over to the attorney general’s office, and, before long, Houde received another check that covered the cost of the equipment. Her car is now outfitted with a storage container on top that lifts and stores her wheelchair and a new set of hand controls. She’s one final piece away from getting back on the road. She’s currently researching a new customized cushion for her car (the school bus seat, which survived the accident, wouldn’t work in the new vehicle).

Despite that one small setback, Houde is delighted with the network of people who stepped up to help with her situation.

“It’s amazing that people come up with stuff like this so that people like me can drive a car,” said Houde as she manipulated the storage container using a handheld controller. “Back in the day, they didn’t have this equipment, so people who are disabled couldn’t drive. Now we have all this independence.”

To learn more about the New Bedford Local Consumer Program, contact 508-979-1693 or email consumer@newbedford-ma.gov to request a complaint form. The program cannot mediate if a consumer has already initiated legal proceedings or if the complaint is against a government agency, charity or private individual.