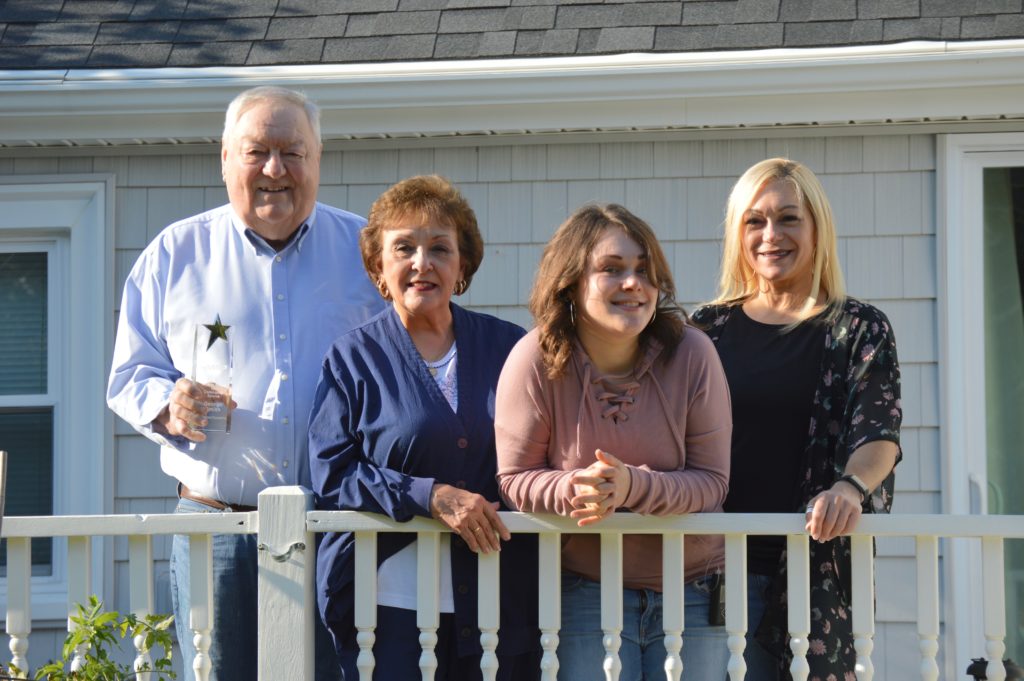 George Smith won the 2020 AARP Massachusetts Andrus Award for Community Service for his decades of volunteerism and community service, which he attributes to the support from his family. Above, George with his family. From left: George Smith, his wife Nancy Smith, granddaughter Lindsey Melo, and daughter Kelly Melo.

On Oct. 14, AARP Massachusetts formally awarded George Smith with the 2020 Andrus Award for Community Service, an award that honors one person from each state who demonstrates a commitment to volunteerism. Sandra Harris, the president of AARP Massachusetts, said there were 33 nominees across the Commonwealth who were considered this year.

Due to COVID-19 restrictions, the award ceremony was held over the video conferencing platform Zoom, with several dozen people in attendance.

In addition to receiving a star-topped statue, the AARP grants the recipient of the Andrus Award the opportunity to make a $2,500 donation to a charitable cause of their choice. Smith selected Coastline’s Community Mainstream Program, which helps older adults access federal, state and community benefit programs, such as SNAP and MassHealth.

“Since retirement, I’ve volunteered at many different organizations, all of which share the same basic goal: helping other people,” Smith said at the award ceremony. “That’s what motivates me. I don’t focus on what awards I’m going to win or how much money is involved. I’m interested in how I can make my community, my city, my state a better place for the people who live there.”

Smith worked at NSTAR (now Eversource) before retiring at age 55. He also served as a Ward 3 councilor in the City of New Bedford for eight years. During the event, Smith said his volunteer work began in earnest back in 1989, when he first delivered meals on Thanksgiving Day.

That was also how he became connected to Coastline Elderly Services, where he has served on the Board of Directors, Advisory Council and as part of the Age-Friendly New Bedford Steering Committee. Smith has also worked extensively with Mass Senior Action Council, where he served as president of the Bristol County chapter.

Numerous people affiliated with Coastline and Mass Senior Action Council spoke during the award ceremony, expressing their thanks.

“There was no task that was below you,” said Carolyn Villers, executive director of Mass Senior Action. “You’re always willing to roll up your sleeves and do the work.” 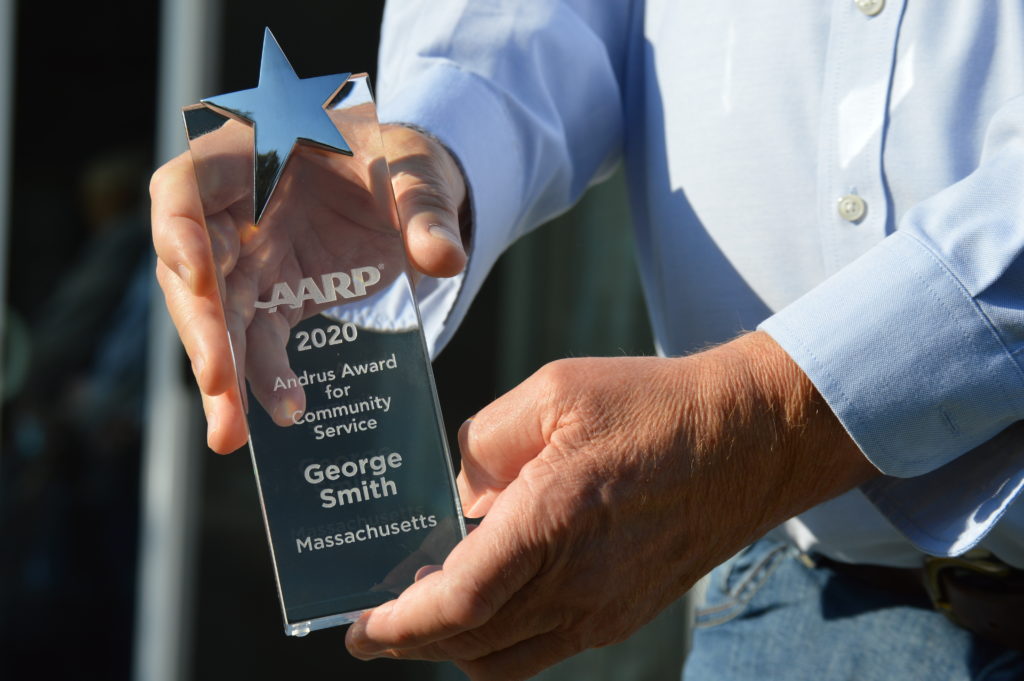 “If you’ve known George for a little while, or you’ve known him for decades, you would have the same impression of him,” said Justin Lees, Coastline’s CEO. “He truly believes in community service. He will never stop advocating for the cause.”

Representatives from AARP Massachusetts said Smith’s latest work supporting the Age-Friendly New Bedford initiative has been especially impressive. Harris described the city’s movement as a “shining example of what people can do when they come together to do good.”

The mayor of New Bedford, in a pre-recorded video, concurred.

“His recent work in making New Bedford a livable community for folks of all ages stands out in my mind as being a crowning achievement in a very accomplished career,” said New Bedford Mayor Jon Mitchell during the ceremony.

Paula Shiner, Coastline’s former CEO, said Smith had committed to the initiative in the early days when Coastline and the City of New Bedford first embarked on the project five years ago. In his work for the initiative, Smith has focused on issues related to social inclusion, a role that Shiner said perfectly suited his personality.

“Everyone in Greater New Bedford knows George Smith,” said Shiner. “Everyone knows when he enters a room because he always greets people. He speaks to everyone and makes sure that they feel welcome.”

Smith credited his decades of volunteerism to the support he receives from his wife, Nancy, with whom he has been married for 52 years, and the support from his daughter, Kelly Melo, and his granddaughter, Lindsey Melo.

“Not only is George a tireless supporter of the people of his community, he is an incredible grandfather,” said Ann McCrillis, Coastline’s planner. “Whenever he stops by my desk, I hear updates on how Lindsey is doing. The two are inseparable, and their relationship highlights something truly admirable about George: he sets an example for younger people.”

Smith ended his remarks reflecting on the global pandemic that has gripped the nation since March.

“I know this year has been challenging for all of us. But I think this year has proven that we can accomplish a lot when we work together,” said Smith. “I want to thank everyone out there who has helped someone, whether it was checking in with a loved one over the phone, delivering a meal to somebody in need, or connecting someone to resources in their community.”

“It has been a long, difficult year,” he added. “But there have been so many people who want to help others in any way they can, and I thank you and want you to know how inspiring you are.”