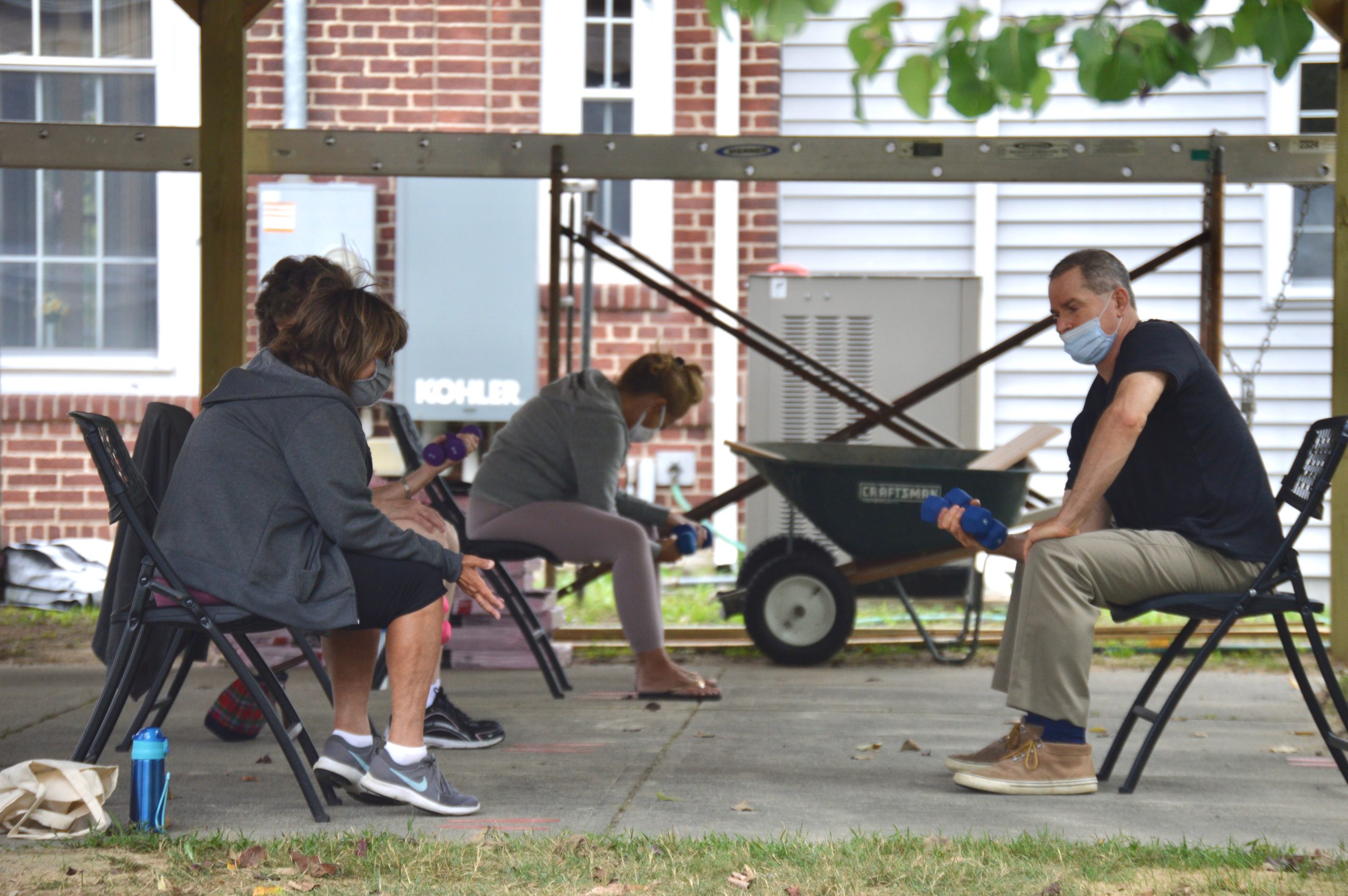 Patrons of the Acushnet Council on Aging participate in an exercise class hosted by Larry Bigos (right) beneath a newly constructed pavilion.

This article originally appeared in the October 2020 edition of Senior Scope. Article and photos by Seth Thomas.

On a typical Friday in a typical year, Larry Bigos’ exercise classes at the Acushnet Council on Aging could attract as many as two dozen participants. With indoor activities still on hiatus at the local COAs, Bigos’ regulars haven’t met in months.

That changed this fall when groups could finally gather again – albeit outside the facility, under a newly constructed pavilion. On Sept. 11, participants excitedly greeted one another as they settled in beneath the structure, which at the time was technically unfinished. Nevertheless, the crew seemed undeterred by the scaffolding running along the perimeter of the structure.

“It’s great to do this again,” said Larry Bigos, before beginning his hour-long class. “We’re going on six months now, and after a while people’s bodies start to deteriorate. We need our minds; we need our bodies. I’m glad to have the opportunity to start again outside.”

Heather Sylvia, the director of the Acushnet COA, said she had priced out a rental tent as a temporary solution, but then Jim Marot, the town’s building commissioner, recommended a more permanent option.

The town was able to use funding through the CARES Act to buy supplies for the structure, which cost about $8,000 – or less than half of what a four-month tent rental would have cost.

Construction started in August, and by the first week of September, the COA hosted its first class since March. By mid-September, the center was offering classes five days a week.

Eight participants plus the instructor can fit comfortably beneath the pavilion. Everyone is situated six-and-a-half feet apart, and visitors are asked to wear masks and bring along their own equipment, water and weights.

“We missed our people. It’s fabulous to see them again,” said Sylvia, as a group of eager patrons signed in and caught up before Bigos’ Friday fitness class. 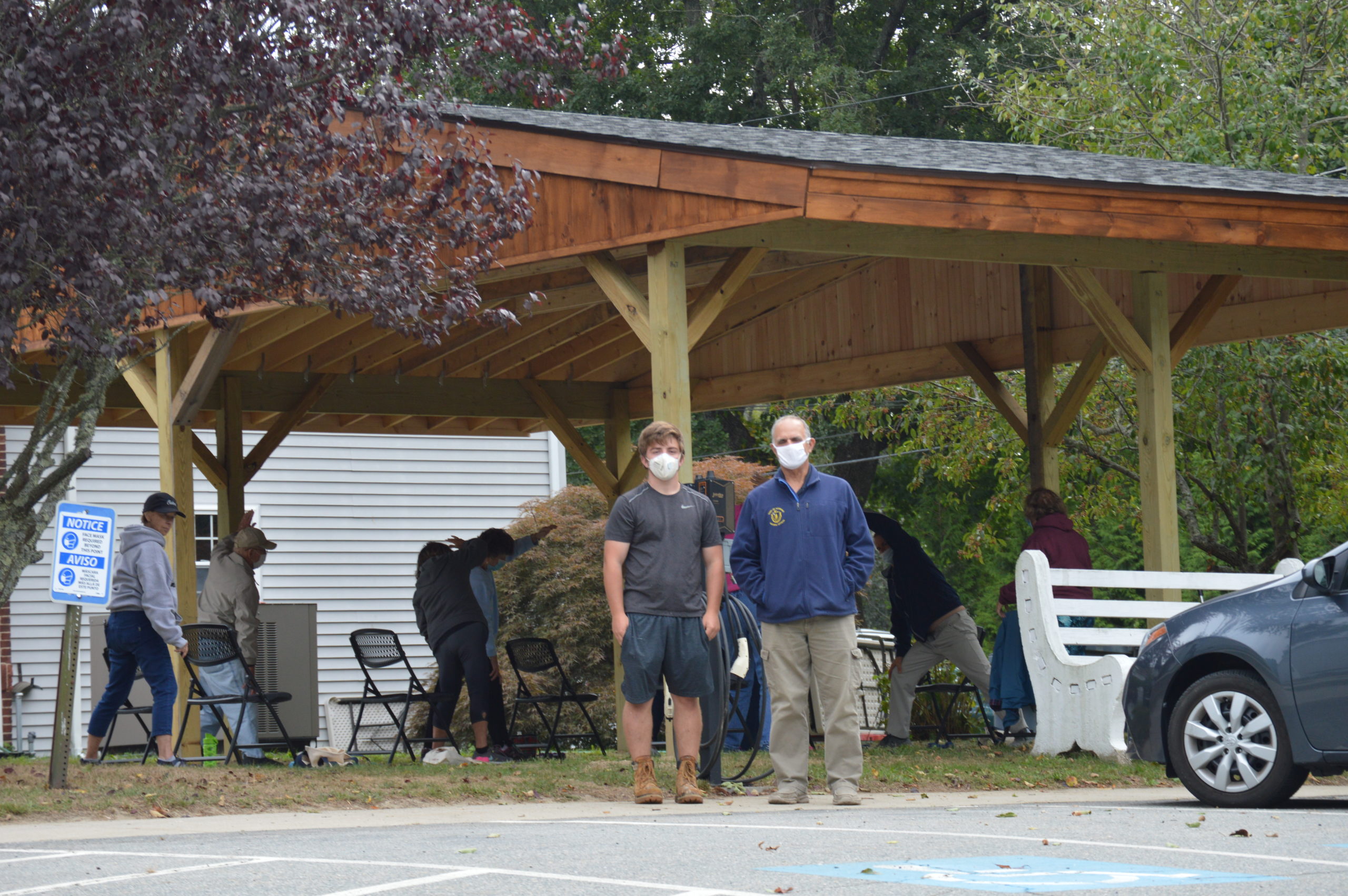 Tyler Camboia and Jim Marot stand in front of the new pavilion at the Acushnet Council on Aging, where classes will be held moving forward.

During the pandemic, the Acushnet COA had received Community Foundation funding, half of which helped the center distribute food over the spring and summer. The other half went to their group classes, which they’re able to offer for free through October.

Marot designed the structure, and former graduates of Old Colony, Tyler Camboia and Miguel Sevasin, handled the bulk of the construction. During the summer, his crew worked on a similar project at the Acushnet Public Library. Marot said the library’s new pergola was built with the same intention: to give the public a place to gather outdoors and to enable to library to connect with its patrons.

By the third week in September, the construction crew was back at the COA to stain the pavilion, giving the structure a rustic flair.

“It expands the capability of the council on aging, and now they could have classes inside and outside for at least eight months out of the year,” said Marot. “It’s a great facility, and we were happy to do it.”