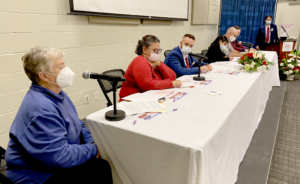 In the four decades since HIV/AIDS emerged as a mysterious new disease afflicting marginalized communities, advancements in treatment and prevention tools have transformed what was once a death sentence into a manageable chronic illness.

Since those early reports in 1981, 700,000 Americans have died from AIDS-related illness, and today advocates, activists and public health experts agree there is still much work to be done.

The conference explored the history of the crisis through today, and the event was punctuated by the sometimes emotional testimony from grassroots activists who provided relief to citizens of the Greater New Bedford region at a time when the federal government was slow to act.

“Death, sickness and rejection were not the only results of AIDS hitting our community. Darkness brought resilience,” said Andy Pollock, president of the South Coast LGBTQ+ Network.

In 1981, medical teams in California and New York identified groups of previously healthy gay men who were experiencing rare, aggressive forms of cancer or lung disease. The following year the Centers for Disease Control and Prevention labeled the disease the acquired immunodeficiency syndrome (AIDS), and in 1984 the cause of AIDS – the human immunodeficiency virus or HIV – was identified.

Liz DiCarlo, a community activist, said at the time volunteers in the South Coast rallied together, forming street outreach teams, providing community education and hosting local fundraisers to support families impacted by the virus. She said this early advocacy predated the formation of ACT UP (AIDS Coalition to Unleash Power) in 1987, which brought national attention to the issue. 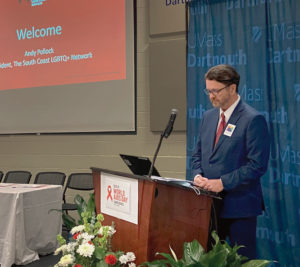 In the decades since, better treatment options became available, and prevention and testing became a central pillar in stopping the spread of HIV, a concept that would be familiar to those living through the COVID-19 pandemic.

“These are the people we need to identify. We have moved away from people who are looking sick. But the risk behavior is still happening.”

In 2005, the CDC estimated that 27,000 of the 40,000 new infections at the time were the result of transmission from those who did not know they were infected. The following year, the CDC released revised HIV testing guidelines, recommending testing for anyone between the ages of 13 and 64, with yearly screenings for those at high risk.

Today, there are about 38 million people living with HIV worldwide, about 1.2 million of whom live in the United States. In 2019, there were nearly 35,000 new HIV infections in America, about half of which occurred in the South. Brian Costa, a nurse practitioner from the Greater New Bedford Community Health Center, said New Bedford is mirroring national trends in that the HIV population is growing older.

About 2,700 people are living with HIV/AIDS in Bristol and Plymouth counties in 2018-19, according to data from the Massachusetts Department of Public Health. Between those two years, those age 65 and over living with an HIV diagnosis had increased by 36 percent.

“The HIV population is aging, which is great. People are living longer with the new therapies,” said Michael Macomber, a nurse practitioner at Boston Health Care for the Homeless Program.

While currently there is not a vaccine to prevent HIV, the oral medication PrEP (pre-exposure prophylaxis) has been proven to reduce the risk of infection from sexual contact by about 99 percent when taken as prescribed, according to the CDC. Research is underway for prevention tools that do not require strict adherence to a daily pill, such as injections every six months or intravaginal rings.

When looking toward the future, guest speakers at the conference identified several other areas that will prolong the end of the HIV epidemic, such as affordable housing issues, inadequate access to mental health services and the ongoing opioid crisis. However, one step any member of the public can take to fight the epidemic: seek testing and know your status.

Linda Spinner, who received a positive HIV test almost three decades ago, stood as living proof that medical advancements have turned the tides. At the conference, Spinner recounted the day she was diagnosed back in 1992. She had requested blood work from her doctor, and knowing her husband was an IV drug user, she asked if she could receive an HIV test. Soon thereafter, she learned she was positive. She was in her mid-30s.

“I didn’t know what to do,” said Spinner. “I had the window open, and I wanted to jump.”

She said back then, understanding of the disease was limited, leaving little resources for women. However, she credits the local activists and medical community for seeing her through that period.

“This year, it will be 30 years that I’m alive, and I’m healthy,” she said. “It’s not a death sentence anymore; you can live a healthy life. So get tested.”