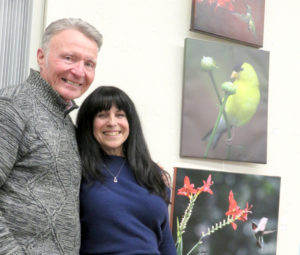 John and Christine Gallagher stand in front of several of John’s photos on display during the month of January at the Benjamin D. Cushing Community Center. Proceeds from the exhibit benefited the Alzheimer’s Association.

This article originally appeared in the February 2019 edition of Senior Scope. Article and photo by Seth Thomas.

John and Christine Gallagher have been advocates for those living with memory loss for years, and, through an art exhibit on display through January, their advocacy took a unique form: vibrant, colorful photographs.

John’s photos were on display and for sale through most of January at the Benjamin D. Cushing Community Center, otherwise known as the Marion Council on Aging. Proceeds from the exhibit benefited the Alzheimer’s Association.

Many of the photos showcased the local natural world, including hummingbirds hunting for nectar, wintry pastorals and a deer emerging from the woods.

John had his start shortly after high school, when he began photographing weddings to pay for college. Though not formally trained in the craft, his wedding work made him fall in love with photography. Inspired by his father’s hunting excursions, he began to photograph nature, which requires patience and time to produce.

“He positions his tripod so that he has a background he likes. He finds a flower, and then he sits there, focused on that flower, until a hummingbird comes along,” said Christine Gallagher, his wife and caregiver. Using a fast shutter speed on his Canon camera, he’s able to capture the image of a bird mid-flight.

John was diagnosed with Alzheimer’s disease about six and a half years ago at the Boston Center for Memory, and since that time, his photography has been impacted by memory loss. While he can still use his camera to take photos, his memory loss has hindered his ability to recall the more technical, computer-based aspects of his work.

However, his wife found a way to download the images stored on his computer and identified companies capable of printing John’s work on canvas panels, mugs and panes of glass.

Since his diagnosis, the Gallaghers have become advocates for those living with memory loss, including speaking in front of professional groups, support groups and memory cafés.

“Christine and I speak to groups of people who have Alzheimer’s and their caregivers, and we tell them that this can be worked on. It encourages them,” John said.

Christine doesn’t shy away from discussing the challenges caregivers can face, but, much like John, she remains positive and forward-looking despite the disease.

“It’s turned me into a more patient person and a more active person. I’m more into politics and into making a mark for something,” said Christine. “You find yourself rolling down a hill all the time because it’s hard. I’m in charge of all finances, all repairs. He doesn’t drive anymore. I’m in charge of basically everything.”

But she cautioned those impacted by memory loss to not shy away from others, which she said often happens to those dealing with a new diagnosis.

The Gallaghers make an effort to “put themselves out there” to show others that there is hope for those living with memory loss.

While not always easy, Christine recommends staying healthy and active, which includes regular exercise, eating healthy, getting enough sleep, making an effort to socialize and “doing things that you’ve dreamed of doing rather than saying ‘I quit.’”

“There’s life after the diagnosis – for the person who has the disease and for the caregiver,” she said.

For John, the “sold” tags next to the photos at his exhibit stand as reminders that life truly does carry on for those with Alzheimer’s disease.

“I can still do the things I want to do. I have a wonderful family, a wonderful wife, and I really enjoy taking pictures and meeting people,” said John. “At 75, being able to feel that way, I’m happy as anything.”