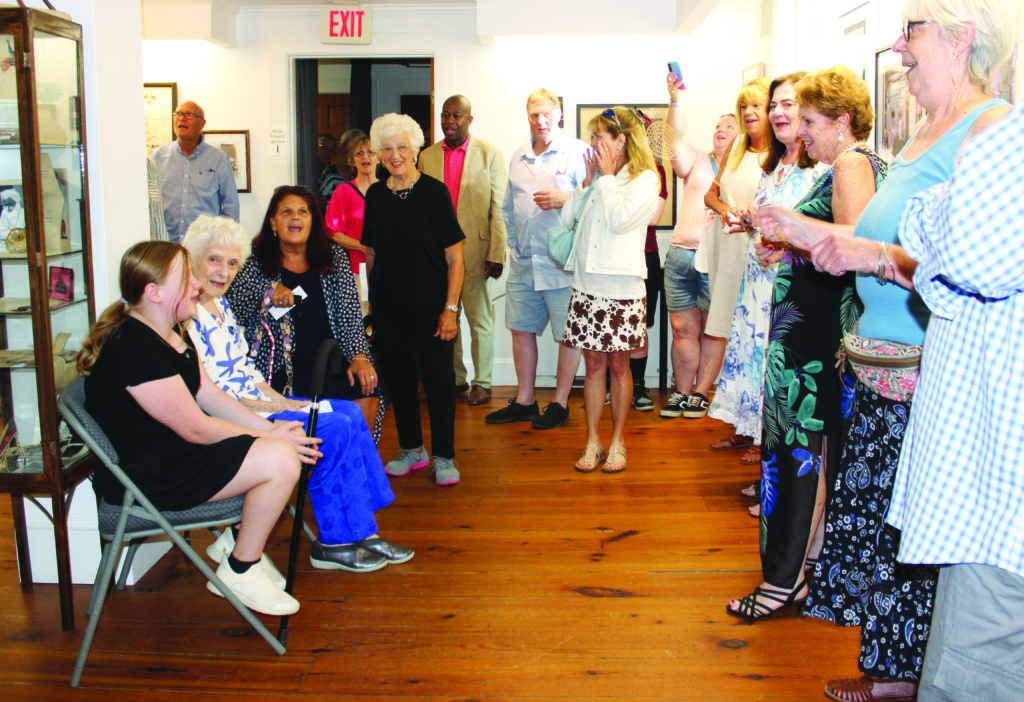 When Mary Ross first considered becoming an artist, it wasn’t a life path encouraged for women, at least not by her family.

Ross’ uncle had financed her private high school education and, when she graduated, offered to send her to college to become a teacher, something he considered a suitable female profession.

But Ross had a mind of her own — and other plans.

Now an accomplished artist, with a career that has spanned seven-plus decades, Ross rejected her uncle’s offer, forging her own path and enrolling in Mass. College of Art. Her independent streak served

The Marion artist celebrated her 95th birthday last month with two shows of her work — one at the Benjamin Cushing Community Center and another at the Marion Art Center. The first show she curated through the Marion Council on Aging, showing her own work alongside that of her neighbors and students from the Dexter Beach Artisan group and neighborhood in town.

The second was a retrospective of Ross’ extensive work, curated by architect Anthi Frangiadis, showcasing the many artistic media and styles Ross has pursued over the years including oils, acrylics, and collages with paper and paint. The show opened quietly in early July, but held a more traditional opening celebration on July 15, just three days before Ross’ 95th birthday.

It featured work from several themes that Ross is known for, including a series of birch trees, another of mermaids, and one of owls.

Ironically, given her rejection of attending a teaching college, Ross would become a teacher of art to many. She worked as the art director for Boston Parks and Recreation Department, where she taught art classes to both adults and children. Later, she held classes in her Dexter Beach home, helping others connect to their artistic talent in whatever medium they chose.

For Ross, the medium was unimportant. Once you teach people about color and composition, she said, they can apply the skill to many styles and media.

Several of the Dexter Beach artists said they had never shown their work before Ross encouraged them to do so.

Dexter Beach started as a hunting and fishing community that transformed into a summer community and now has many year-round residents. With just over 85 homes, situated on and around the Weweantic River, it is a tight group of neighbors who look out for each other and for Mary.

One artist from the neighborhood, Deborah Kuhlman-Hussey, said Ross would invite ladies over to rip paper and other art play together, often spotting those who had interest and talent in the work and encouraging them to do more.

“We have a group of people at the beach who have a lot of different interests,” she said. “Mary has been the person who sort of brings it all together.”

The variety of media at the COA gallery show bears this out with photography, pen and ink, woodwork, needlepoint, and more shown. That might be because Mary herself chooses to work in a variety of mediums, some of them found objects. Her popular mermaid series, for example, got its start while Mary was on the beach noticing how the shape and texture of seaweed resembled billowing hair.

The artists credit Mary for the show and, especially for the amateur artists in the group, for nudging them to show their work. That’s an important step in the growth of an artist, Mary said.

“They become better because people are looking at their work,” she said. “Quickly, they become very professional.”

The show, which opened July 7, is one of what has become a regular series of shows Ross puts on at the Marion Council of Aging gallery. In some ways, her work there is a reflection of Ross’ desire to open her own gallery, not because she wanted to sell artwork but because she wanted to do a better job than some gallery owners she worked with as an artist.

“Encouragement is so important,” she said. “If I ever have a chance to have a gallery, I’m just going to love my artists.”

Ross’ focus on art can be seen in the number of pieces at the MAC show, including bins full of collages. Asked about her work, Ross quipped she was never interested in normal things like housework.

“I promised myself if I do a little housework then I can make a mermaid,” she said, smiling. “That’s my reward.”

Those at the well-attended MAC opening seemed to appreciate the nonagenarian’s talent, scooping up many of her paintings and leaving empty bins behind them.

As about 35 people encircled her at the MAC opening, all singing happy birthday, Mary beamed from her chair.

“I’m amazed. I’m really amazed,” she said about the experience. “I think it was a great success.”