The Artisans of Dexter Beach Find Inspiration in the Neighborhood 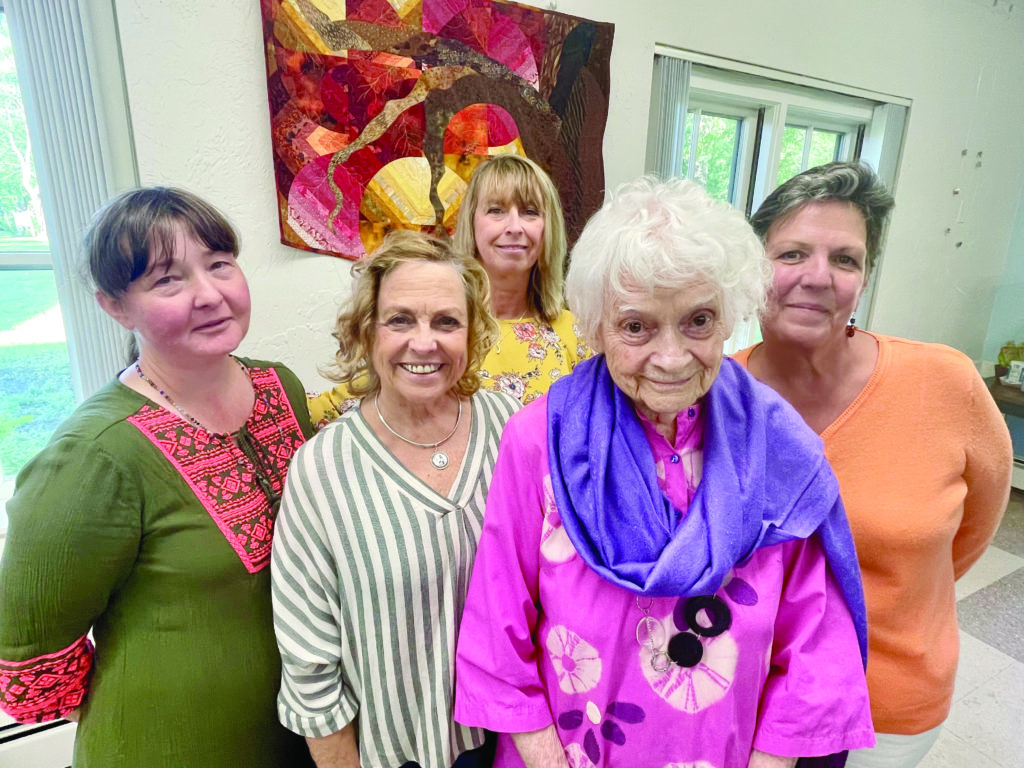 This article originally appeared in the August 2021 edition of Senior Scope. Article and photo by Seth Thomas.

In recent years Marion’s Benjamin D. Cushing Community Center has regularly displayed the work of local artists. With programs and patrons returning to the center, so, too, has the gallery. The latest showing, the “Artisans of Dexter Beach,” compiles the work of artists united by proximity and who are all the beneficiaries of the wisdom and tutelage of their neighbor, Mary Ross.

Ross, now in her 90s, has been an active artist for decades and has helped to organize galleries at the community center. There are about a dozen fellow artists living in her own small community at Dexter Beach, where she serves as a source of inspiration as well as a font of knowledge.

“I never frame a piece until Mary’s seen it and okayed it,” said Diane Parsons, during the opening reception of the show, held on July 9.

Parsons has vivid memories of her trip to Thailand, where she temporarily worked at an elephant sanctuary. She helped to wash and feed elephants who had been abused, and she was so inspired by the experience that the animals became the subjects of watercolor paintings.

“It was so easy to paint them, I didn’t even have to work,” she said. “All the memories were there.”

As Parsons worked on the project, she, like many of her fellow neighbors at Dexter Beach, asked Mary Ross for her opinion. Ross recommended setting the gray elephants against a colorful paper collage background, which gives the piece a sense of depth.

Ross has worked in a variety of mediums over the years. She started with oil paint, tried acrylic paint and spent time working with found objects before settling on collage. She’s taught many of her neighbors the basics of the medium, covering concepts like color, design and composition. She noted that many of the pieces on display drew from those lessons.

“But they found their own way to use the information that I taught them,” Ross said. “I like to talk about art with anybody who will listen.”

You could see how those lessons were interpreted by her neighbors. Carol Annichiarico used some of the basic principles of collage to create glass wall hangings.

“One of my favorite pass times is walking on the beach, and I started collecting sea glass. When I look at the pieces, they inspire me to create things,” she said, adding that the glass from her work had been sourced from the region’s shorelines, including New Bedford, Newport, Mattapoisett.

Cheryl Francis used crushed glass to create something akin to a stained-glass table, which also draw on elements of collage.

“I met Mary when I was a little girl. My parents rented a cottage from her,” said Francis. “Now I live two doors down from Mary.”

“She’s taught us,” she added. “Some of us even listened.”