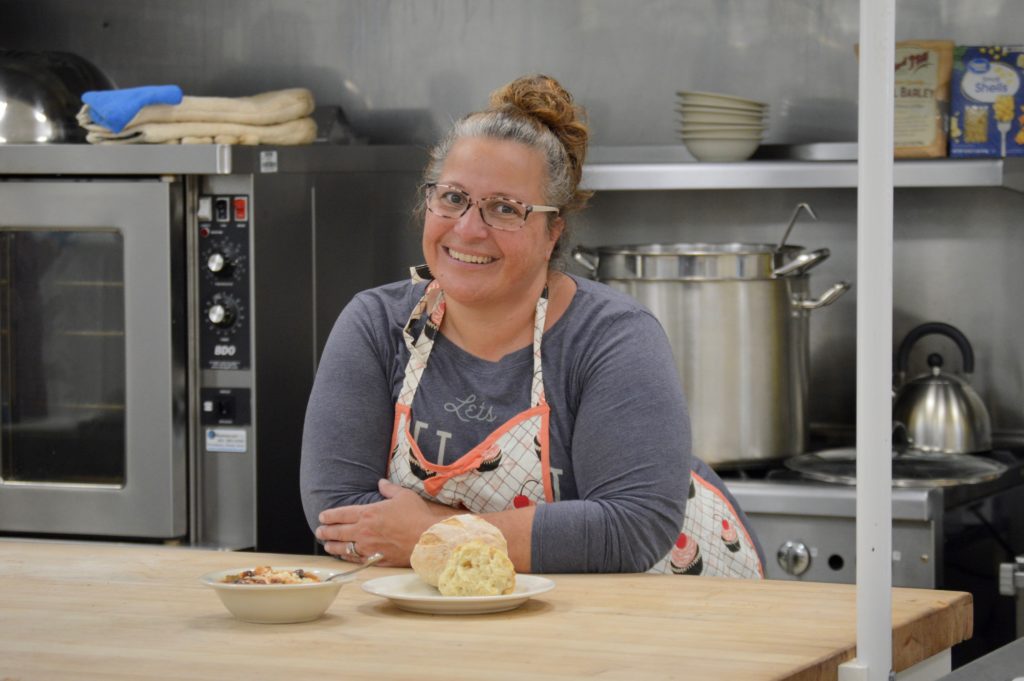 Since launching her business earlier this year, Melissa Sepulveda, the owner of Forno Bakery, has been working out of her residential kitchen where space is limited. To meet demand, she started utilizing the kitchen inside the Benjamin D. Cushing Community Center in Marion.

This article originally appeared in the November 2020 edition of Senior Scope. Article and photo by Seth Thomas.

Throughout the pandemic, as Americans spent more time indoors and less time in restaurants, amateur cooks took to making bread. For Melissa Sepulveda, baking is part of her heritage, and she has fond memories of her Sicilian grandmother cooking from scratch.

But last year, when life threw several challenges at Sepulveda, she found herself baking as something of a therapeutic escape.

Sepulveda was battling breast cancer, and her mother, Frances, was enduring health problems as well. She said her own prognosis was generally positive, and she had the cancer removed without chemotherapy or radiation. Still, at one point, the two were hospitalized at the same time.

Her mother passed not long after, and during her long recovery from cancer, Sepulveda turned to baking.

“I started to make bread, and it was therapeutic, almost meditative,” she explained. “But I was making so much of it, that I had too much for my family of four. So I would give it away on Facebook.”

Throughout the first half of 2020, this hobby slowly blossomed into a business. The pandemic significantly slowed the pace of her photography work, which she has done professionally for 20 years. At the same time, her focaccia, biscotti and bread bowls were in high demand.

And so, Forno Bakery was formed. She now sells to shops and restaurants in her hometown, Marion, including the Marion General Store, Ripe From The Vine, Harriet’s Catering, and, most recently, Walrus & Captain. It wasn’t long before her new endeavor became too unwieldy to handle inside her own residential kitchen.

That’s when one of her clients had mentioned the spacious, modern kitchen at the Benjamin D. Cushing Community Center.

Karen Gregory, the director of the Marion Council on Aging, said Sepulveda called her out of the blue one day, and the team at the community center approached Marion’s town administrator about having her utilize the space. Sepulveda plans to work during the early morning or afternoon hours, opposite of the times that the Meals on Wheels program uses the kitchen.

Sepulveda began formally working there during late October, just in time for the return of the center’s Thursday lunch program. On Oct. 22, the COA and the Recreation Center worked together to offer minestrone for patrons. A small number of participants were allowed to eat inside the center, and the rest were able to take soup to go.

Sepulveda contributed fluffy, fresh-baked rolls as a way to give back to the community.

Moving forward, she estimates she’ll be at the center about four times a week to meet demand, which can stretch up to 100 loaves of bread a week. With the holidays coming, she suspects that number will increase.

When she introduced herself to the group dining at the center, and she revealed that she was the one who made the rolls, the crowd applauded.

“As much as it’s been difficult, I always wanted to find the joy in everything,” said Sepulveda. “My mother was very joyful, always looking at the bright side, always nice to everybody. And I want to remember that. I think of her a lot when I’m baking.”