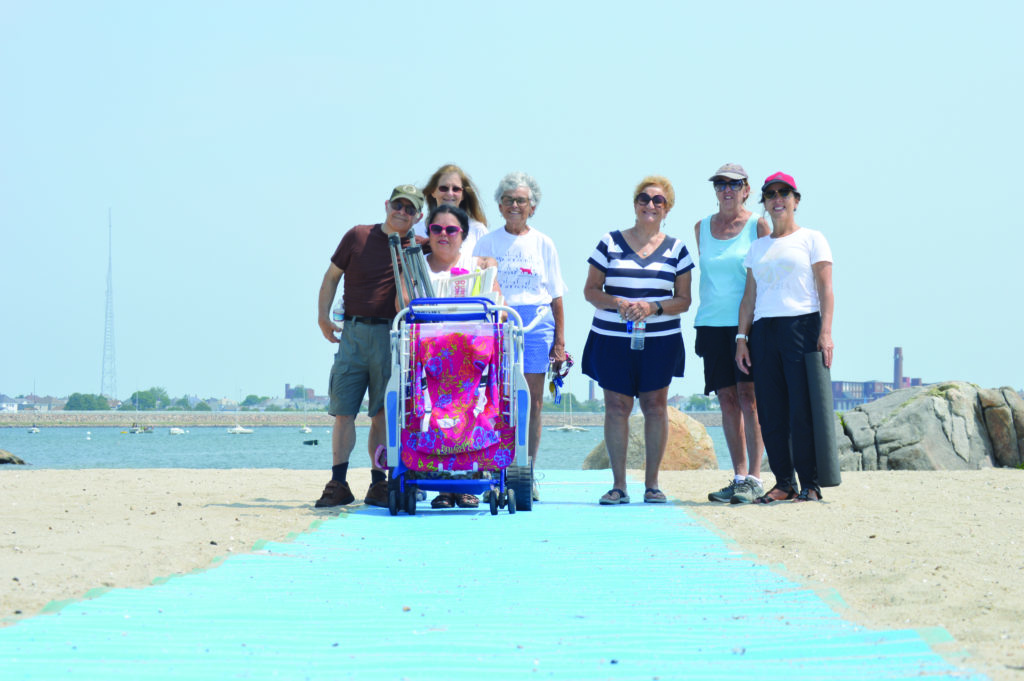 This July, accessibility mats were installed at three beaches in Dartmouth. The mats make it easier for wheelchair users and those with mobility issues to make their way across the sand. On July 16, the Dartmouth Council on Aging held a beach party at Jones Beach, and the center intends to host more beach activities in the future.

This article originally appeared in the August 2021 edition of Senior Scope. Article and photo by Seth Thomas.

If you visit one of the region’s local beaches, you may notice long blue carpets crossing the sand. Those are accessibility mats, and they provide a stable walkway for those who use wheelchairs or walkers, or for anyone who has mobility issues.
In early July, several accessibility mats were installed at Dartmouth’s three public beaches – two at Apponagansett and Round Hill beaches and one at Jones Beach.

The idea for the mats came from a citizen who had approached a board member of the Dartmouth Parks and Recreation Department regarding her mother.

“She was concerned that [her mother] wouldn’t be able to attend the beach in the summer, which was one of her favorite pastimes,” said Dartmouth Council on Aging Director Amy DiPietro.

With some funding from the Dartmouth COA, the town was able to purchase mats, which were staked into the sand by Dartmouth Parks and Recreation Director Tim Lancaster, Recreation Coordinator Rebecca Amaral, and the COA’s maintenance worker, Bronson Collins.

“We’re trying to make Dartmouth as inclusive and age-friendly as possible,” said DiPietro. “These mats allow people with walkers, wheelchairs or baby strollers to make it down to the beach safely.”

The story behind the accessibility mats at Dartmouth’s beaches – from a general inquiry from the public to a broader community effort – is similar to the beginnings of the Sudbury-based nonprofit Small Miracles in Life Exist (SMILE Mass).

“The group started by simply asking the Town of Sudbury to install a handicap swing at the local park,” said Smile Mass co-founder Susan Brown.

She said that she and fellow co-founder, Lotte Diomede, were raising children with disabilities, and needed more accessible recreation options. At the time, there was an opportunity to write a grant for a full playground, but it couldn’t be written by the town – it had to be completed by a resident.

Brown and Diomede took on the project, and their initial request for a single swing blossomed into the installation of a fully accessible playground. Following the project’s completion in 2010, SMILE Mass turned its focus to floating beach wheelchairs, which enables the to user to enter the water.

For wheelchair users, Brown said there are two main options for beachgoing: wheelchairs with larger treads that can help the user traverse sand and grass, and “amphibious” wheelchairs that enable the user to enter the water. While many communities offer beach wheelchairs that can trek through the sand, the amphibious wheelchairs, at nearly $2,000 a piece, can be cost-prohibitive.

Brown said, since its inception, SMILE Mass has donated about 140 amphibious wheelchairs to communities throughout New England, including the City of New Bedford.

“Several years ago, we were approached by the Commission for Citizens with Disabilities because they wanted to make sure at least one of our beaches was an accessible beach,” said New Bedford Parks and Recreation Director Mary Rapoza. “It was decided that West Beach would be the beach that we would focus on. Since that time, we’ve made a number of improvements.”

Those improvements include an accessibility mat similar to the ones at Dartmouth’s beaches as well as an amphibious wheelchair, which the City secured from SMILE Mass back in 2015. The City is also in the process of redesigning the bathhouse at West Beach to make it compliant with the Americans with Disabilities Act.

For those who are interested in trying out the amphibious wheelchair at West Beach, all you have to do is ask a lifeguard on duty.

The wheelchairs look somewhat like a patio chair that has been outfitted with large wheels, and the arm rests are floatation devices. The chairs can hold up to 300 pounds. While users cannot propel themselves forward, there is a strap in the front of the wheelchair to pull them along. At West Beach, the lifeguards will stay with you in the water the entire time.

The wheelchairs are free for use for the public, and you do not need to call ahead to make a reservation. In addition to West Beach in New Bedford, there is a similar amphibious wheelchair at Horseneck Beach State Reservation in Westport. If you’re vacationing around the state, you can check SMILE Mass’ website for a complete list of beaches where the organization has donated chairs.

In Dartmouth, the Parks and Recreation Department said there are beach-trekking wheelchairs available for the public. You do not need to make a reservation, just check in with the lifeguards. The wheelchairs in Dartmouth are not intended for use in the water.