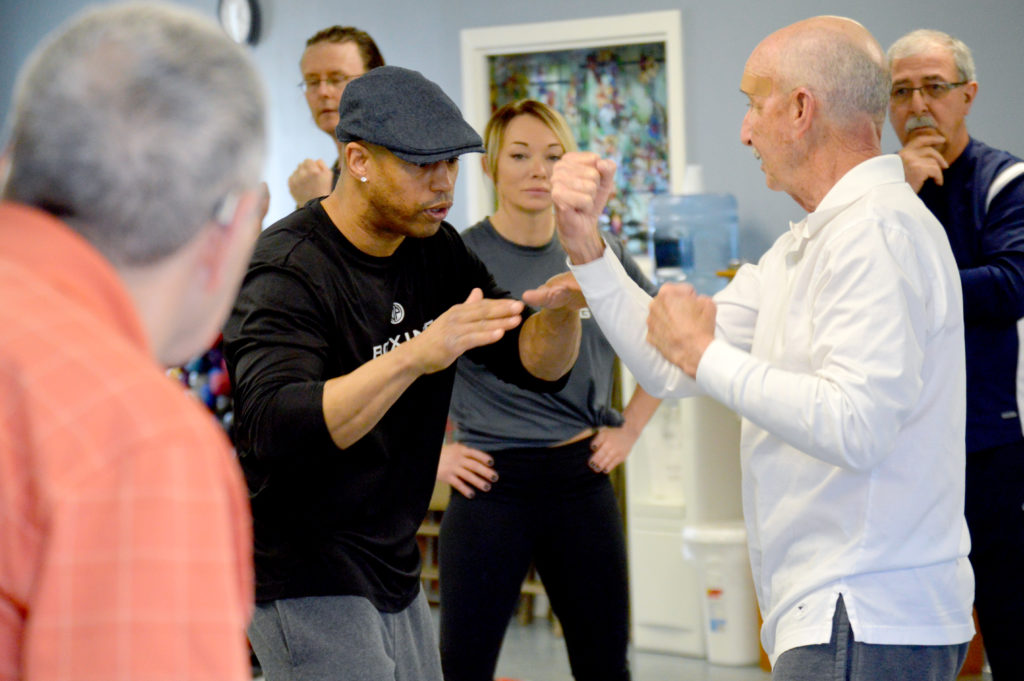 Roland Poyante (right) throws an uppercut toward Jason Pires (left). Pires, a former pro boxer, is teaching a boxing class intended for people with Parkinson’s disease and their caregivers. Research has shown exercise that requires deliberate movements can help those with Parkinson’s develop strength and agility.

This article originally appeared in the June 2019 edition of Senior Scope. Article and photos by Seth Thomas.

A former pro boxer is helping those living with Parkinson’s disease knock out their symptoms in a new fitness class.

On April 16 at the Dartmouth Council on Aging, about two dozen people stood in a circle and learned basic punches, jabs and uppercuts from Jason Pires, a former pro boxer and Olympic alternate during the 1996 Summer Olympics, and Crystal Lawson, a mixed martial arts fighter and Muay Thai pro.

The non-contact boxing class was intended for those with Parkinson’s disease as well as their caregivers.

75-year-old Roland Poyante was formally diagnosed with Parkinson’s about a year ago, but has experienced symptoms for the past few years. Poyante said he was surprised when his doctor recommended boxing. His wife made a connection with Pires, and now Poyante has been training at Pires’ gym, KO Gym on Conduit Street in New Bedford, once a week for the past five months. 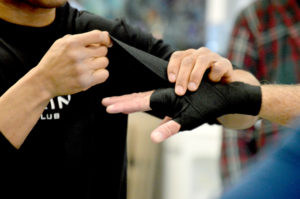 “It’s the best thing I’ve ever done,” said Poyante. “I can feel the difference in my shoulders, in my arms and in my legs. I’m not physically exhausted as I used to be. All I wanted to do was sleep. Now when I want to sleep, it’s because I’m too tired.”

Parksinson’s is a progressive neurodegenerative disorder that affects movement. It occurs when the nerve cells that control movement in the brain begin to die off. According to the National Institutes of Health, researchers believe that Parkinson’s stems from a combination of genetic and environmental factors. Age is the primary risk factor, and the disease affects more men than women.

People who have Parkinson’s can experience tremors, rigidity, and it can lead to difficulties with walking, talking and balance. As the disease progresses, people may experience memory problems, difficulty sleeping and depression.

While drugs and surgery may stave off or temper some symptoms, there is no outright cure.

An increasing body of evidence has shown that exercise is vital for those with Parksinson’s disease. Exercise classes that require deliberate, focused movement – such as boxing, tango, or tai chi – appear to be especially helpful. 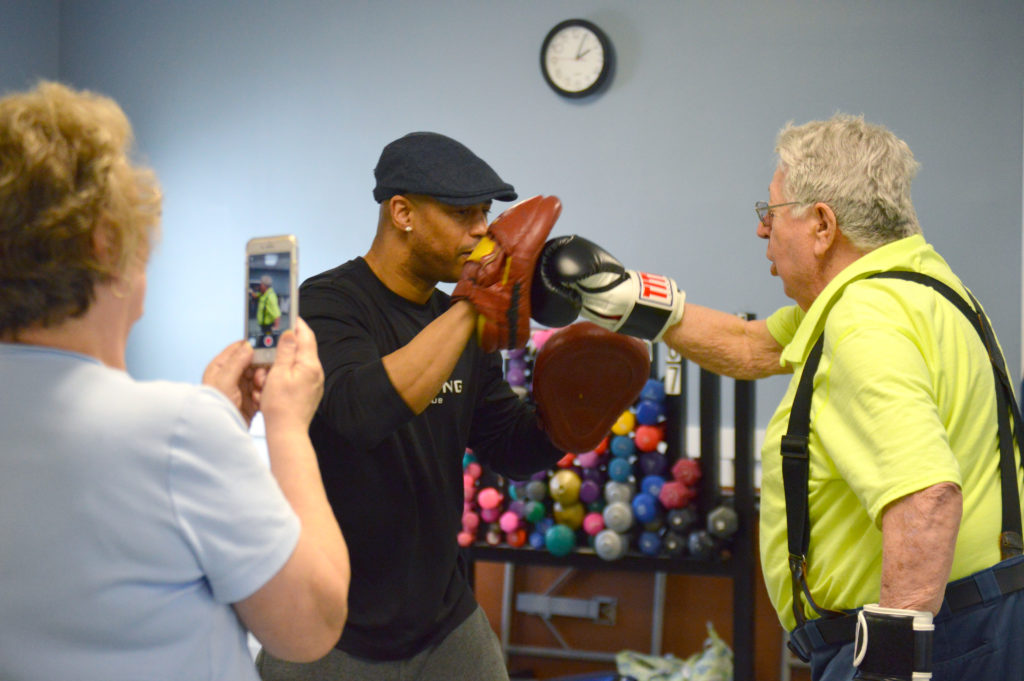 “Boxing helps them move, focus, and concentrate, and it helps with balance,” said Pires. “It’s motivational and builds up confidence.”

“They need to work out,” he continued. “Don’t let the disease get you down and depressed. You need to get active right away.”

A similar program called Rock Steady, which was founded in 2005, is a non-contact boxing program designed specifically for people with Parkinson’s disease. A study published in 2011 by the American Physical Therapy Association tracked a small group of Rock Steady participants to determine whether or not it mitigates symptoms.

Though the group size was small, the study found “promising outcomes” and concluded that “the patients in this case series showed short-term and long-term improvements in balance, gait, activities of daily living, and quality of life after attending the boxing training program.”

While the class Pires and Lawson are teaching is not formally a Rock Steady class, it is based on the course’s methods. Boxing is a full-body workout, and class participants can expect to throw punches, twist and bend their torsos, and even shout.

Late in the hour-long class, students lined up to land a flurry of punches at Pires’ mitts. With each hit they land, the students shout: “One, two, three, four!”
The shouting isn’t just to get them amped up; it forces them to use their voice, which can be affected by the disease.

“You want to help them build their voice,” said Pires. “With Parkinson’s, people can become depressed. They can go into their shells. With boxing you keep building up their confidence.” 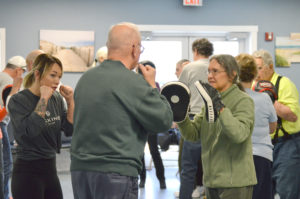 When Poyante trains at Pires’ gym, he does a variety of vigorous exercises, both in and out of the boxing ring. As physically exhausting as his routine can be, he said the mental component of his training has helped tremendously.

“You gotta keep your mind working at all times. In order to box, you have to concentrate,” said Poyante. “Sometimes it’s hard. I have trouble talking and trouble with my memory. All of this stuff is motivating me to keep active.”