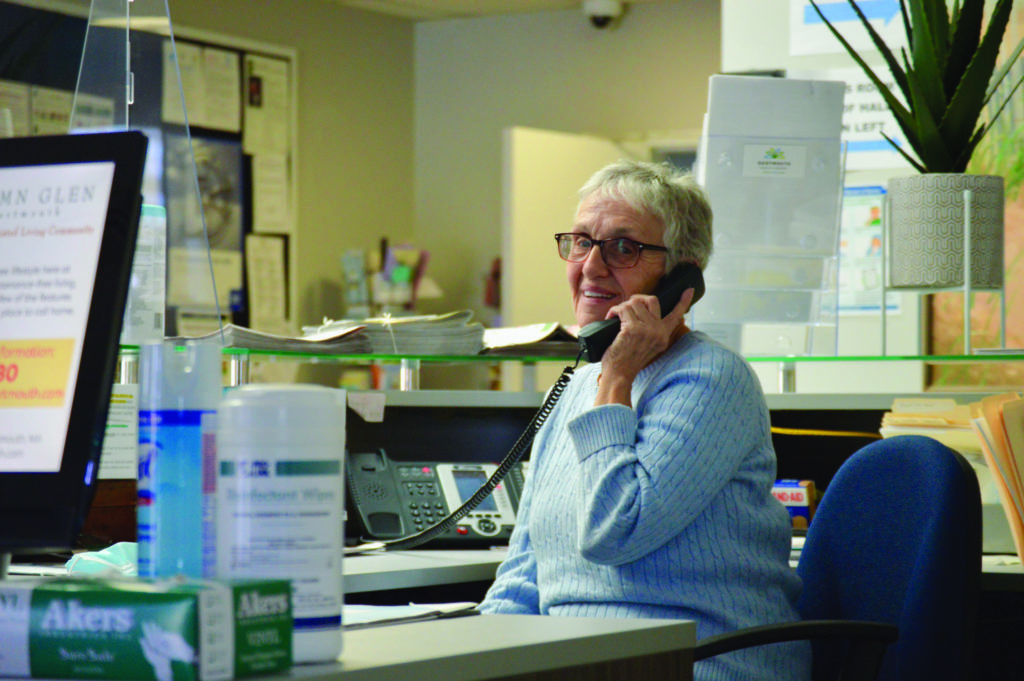 Lois Carvalho spent about a year and a half in retirement before becoming a volunteer at her local council on aging. For her, working has been a way to stay active. The pandemic has caused upheaval in the labor market, but while awaiting the vaccine, this downtime could be spent updating your résumé or learning new skills.

After spending nearly three decades in the workforce, Lois Carvalho’s retirement lasted about a year and a half. Despite that sounding like a relatively brief period of unemployment, Carvalho described it as “a long time.”

A friend suggested she check out the Dartmouth Council on Aging, where she later became a volunteer, answering the phone and completing miscellaneous tasks. Eventually, a position opened up in the center’s adult social day program. And while that program has been on hiatus due to the pandemic, she has since pitched in at the center periodically.

“I was delivering meals for a while, and now I just come in,” she said. “I’ll do whatever they want me to do. I’ll even do windows, if that’s what they want!”

For many older adults, navigating the labor market was difficult even prior to the pandemic upending everyday life and triggering a recession. The uncertain economy, compounded by the health threat brought on by the coronavirus, prompted many mature workers to leave the labor market altogether.

Data from the Pew Research Center show that the pandemic drove baby boomers – those born between 1946 and 1964 – to retire at a higher rate than normal. About 3.2 million more baby boomers retired during the third quarter of 2020 than in 2019. Since 2012, the number of newly retired baby boomers had increased annually by about 2 million, according to Pew.

While unemployment grew to a staggering 14.7 percent in April, the economy has since rebounded. Still, millions remain unemployed, and the ongoing recession has had an outsized impact on low-wage workers, women and those without a college degree.

What sectors of the economy will be able to bounce back – and to what extent they recover – depends largely on the vaccine’s rollout during 2021 and the response of elected officials. Following weeks of debate in Washington,

President Trump signed a bill providing $900 billion in COVID-19 relief on Dec. 27. Two unemployment programs were extended for an additional 11 weeks, the Paycheck Protection Program was renewed and another round of stimulus checks will be sent to eligible adults.

For those who would like to reenter the labor market, there will undoubtedly be hurdles ahead. However, with citizens around the nation stuck indoors, now could be an ideal time to update your résumé or strengthen your skill set.

Karyl Ryan, director of Coastline’s Senior Community Service Employment Program (SCSEP), said that about half of those currently enrolled in SCSEP lacked internet access or basic computer skills, which can be a major obstacle in a labor market that is becoming increasingly web-based.

“It’s so important to have some basic computer training,” said Ryan.

In the new year, Coastline will be providing computer training for some of those enrolled in SCSEP and the Foster Grandparent Program. For the FGP volunteers, they’ll be learning how to perform one of the basic functions of their job – mentoring young students – over the internet.

“As we come out of the pandemic, so much of it is going to be remote or tech-based,” said James Daniels, the director of the center. He said a better approach to learning technology is to learn a specific skill set rather than trying to learn about every possible facet of a computer or every app on your smartphone.

“Like, for example, learn the skills you would need to run an Amazon business,” he said.

Prior to the pandemic, the Career Center happened to turn its focus to several industries that are projected to fare better in the recovering economy, including manufacturing, the maritime industry and health care.

Daniels said the center helps people think outside the box when it comes to job training. Even manufacturing, he said, is something to reconsider.

Daniels said that for older workers, some believe they can’t learn new skills, and that’s just not true. He also noted that older workers benefit from soft skills – like customer interaction and dependability – that some younger workers have yet to acquire.

Back at the Dartmouth Council on Aging, before returning to the desk to answer the phone, Carvalho parted with this advice to older workers: “Whatever you’ve done in the past is what you bring into the future. You don’t lose anything. It’s all part of the aging process.”

Contact Coastline at 508-999-6400 for info on the Senior Community Service Employment Program and the Foster Grandparent Program, both of which are currently enrolling new participants.

Learn more about the MassHire Greater New Bedford Career Center at 508-990-4000 or online at masshiregnbcc.com.