Can Meat be Part of a Healthy, Well-Balanced Diet? 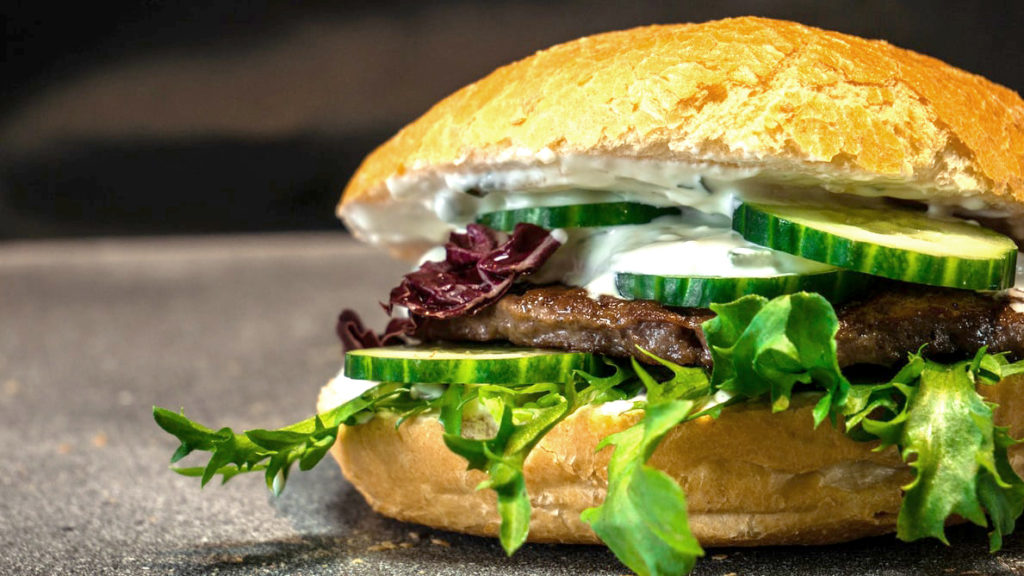 Burger or veggie burger: is one healthier than the other? Meat can be part of a healthy diet, but controlling portions is key.

This article originally appeared in the October 2019 edition of Senior Scope. Article by Seth Thomas. Photo courtesy of Unsplash.

Fad diets come and go, but plenty of these news-making diets revolve, to some degree, around meat. The “paleo diet,” which gained traction several years ago, places an emphasis on eating meat. Vegans eliminate animal protein and animal byproducts altogether.

These dieting trends may stir confusion and make it harder to gauge where meats fits into a well-balanced diet. Part of the confusion may lie in the fact that many of us were raised to believe a meal must contain a large portion of meat.

“We really don’t need that much,” said Coastline Register Dietitian Katlynn Ferreira during a recent presentation at the Dartmouth COA.

Also, some ways in which meat is prepared will enhance its fat content, such as frying pork chops in oil or serving steak with a pat of butter. Processed or packaged meat products often contain high amounts of salt and additives in addition to fat.

“Think of meat as a condiment as opposed to a main component of your meal,” said Ferreira. “Think of basing your meal on everything else you’re going to pair with the meat.”

If meat can be part of a well-balanced diet, then what of those who omit meat altogether? Is a vegetarian diet healthy?

As with an omnivorous diet, it all depends on what you’re eating.

“A lot of the times when people go vegetarian for the first time, they end up eating a lot of excess carbohydrates because they don’t understand where to get protein,” said Ferreira. “It’s important to do a little reading if you’re cutting back or completely omitting animal products.”

According to a Gallup poll from 2018, about five percent of Americans identify as vegetarians (those who subsist on a plant-based diet, but incorporate animal byproducts like milk and eggs) and three percent identify as vegans.

That same report noted that, despite vegetarians being a relatively small slice of the U.S. population, the sale of plant-based foods and milk alternatives – like almond milk and soy milk – is on the rise.

With a stable number of people identifying as vegetarians and vegans, and with an increase in plant-based food sales, Gallup concluded that “it appears Americans are eager to include alternatives to animal products in their diets but are not willing to give up animal products completely.”
With that in mind, it’s important to note that meat-alternatives are not made equally.

Burger King made headlines with the debut of its “Impossible Whopper” – a meat-free alternative to its signature burger. According to Burger King’s website, the sandwich contains 1080 milligrams (mg) of salt.

The American Heart Association recommends no more than 2,300 mg of salt a day, with an ideal limit of no more than 1,500 mg for the majority of adults.

In other words, while words like “meat-free burger” or “veggie burger” may make you think it’s a healthier alternative to red meat, the salt content alone is enough to draw concern.

“If you’re replacing meat with an unhealthy meat substitute, you’re losing nutrients,” said Ferreira. “A lot of meat substitutes are high in sodium and high in food additives.”

If you’re trying to reduce your meat intake, Ferreira recommends starting small, one meal at a time. You could try eliminating meat from breakfast, for instance. At dinner, try a small portion of meat and be creative with what you’re pairing your meat with.

Ingredients like beans, lentils and quinoa provide plant-based protein and can be prepared without a day’s worth of salt.

For more nutrition tips, visit the Dartmouth Council on Aging’s free Pound by Pound group, held Mondays at 10 a.m., where Ferreira is a regular guest speaker.