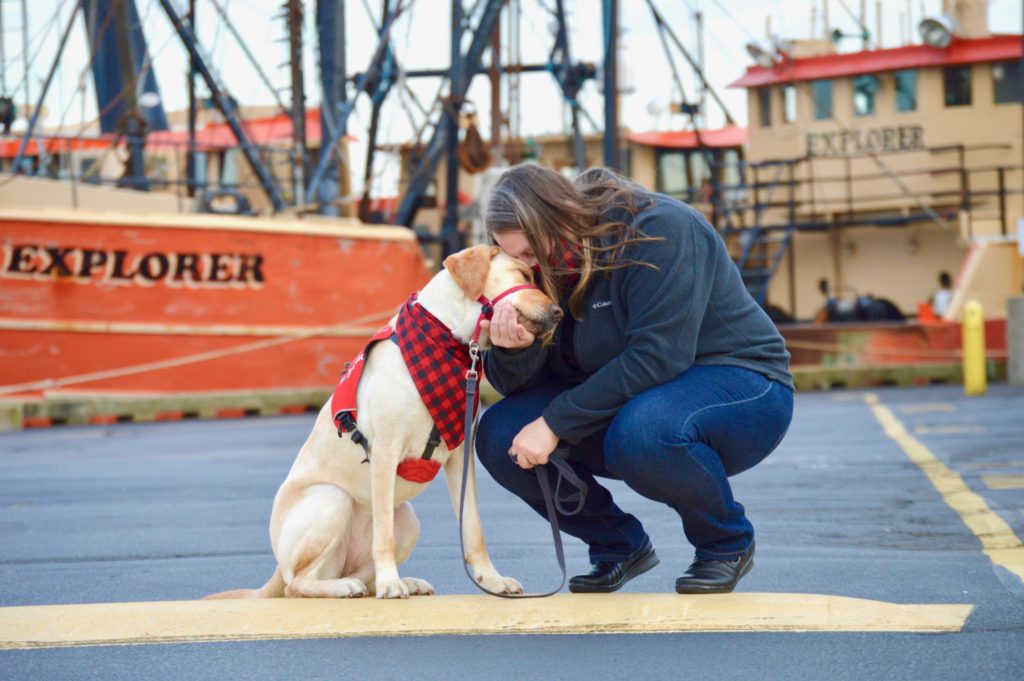 After about 15 years of navigating a moderate, progressive hearing loss that began in her 40s, Michelle Walton acquired a service dog named Zoey from the nonprofit NEADS World Class Service Dogs. While service dogs may not be the right fit for everyone, for Walton, Zoey has made her feel like she “got her life back.”

As Zoey trots through downtown New Bedford, she acts like a typical, two-year-old Labrador retriever. She’s curious and will stop to sniff the grass as she passes through Custom House Square. But, when she’s equipped with her red vest and a gentle leader, Zoey is at work, ensuring that her owner remains safe as she navigates the streets.

Zoey, along with her owner, Michelle Walton, are graduates of NEADS World Class Service Dogs, a nonprofit based in Princeton, MA, that trains dogs to assist their owners with daily activities and to mitigate their partner’s disability. In addition to being a constant companion since graduating earlier this year, Zoey has assisted Walton hear the environment around her.

For Walton, this new addition to her life has been a game changer.

Walton has moderate, progressive hearing loss, which she first began to notice in her 40s. About 15 years ago, when she was working as a medical transcriptionist, she found herself needing to increase the volume of recordings in order to dictate notes.

A few years later, she had taken a job as a pharmacy tech at a CVS. Not long after accepting the position, a colleague approached Walton, letting her know that she had called her name several times without receiving a response. Walton was totally unaware, and concluded that it was time to have her hearing checked.

Walton went for a hearing test, and she said her audiologist was surprised. By age 45, Walton was wearing hearing aids.

According to the latest edition of “A Modern Guide to Hearing Loss,” a resource guide published by the Massachusetts Commission for the Deaf and Hard of Hearing (MCDHH), the average time between a person first noticing their hearing loss and actually reaching out for help or seeking treatment is seven to 10 years.

Hearing loss is relatively commonplace. The MCDHH estimates that one out of every five Americans over the age of 12 has a hearing loss, or more than 1.3 million residents of Massachusetts. Everyone experiences hearing loss differently, at different times of their life and for different reasons.

For Walton, her hearing loss was beginning to impact more than just her job.
“I used to be an avid walker, and I would walk by myself,” Walton explained. “But people or bicyclists would try to pass me, and I wouldn’t hear them until they were right up on me. It became a safety issue.”

She also described her hearing loss as an isolating experience because it impacted her everyday communication skills. Hearing a one-on-one conversation inside a packed restaurant can become impossible. And hearing aids, which can be cost prohibitive, only go so far. They will not bring your hearing back to 100 percent of their function, she said.

Further compounding the issue was her sleep apnea. At night she would sleep with her hearing aids out and a noisy sleep apnea machine strapped to her face. Her family worried and began to question whether she would be able to hear a fire alarm should it go off while she slept.

Walton first reached out to DEAF Inc., which offers programs and services to assist those with hearing loss. It was there where she was referred to NEADS. 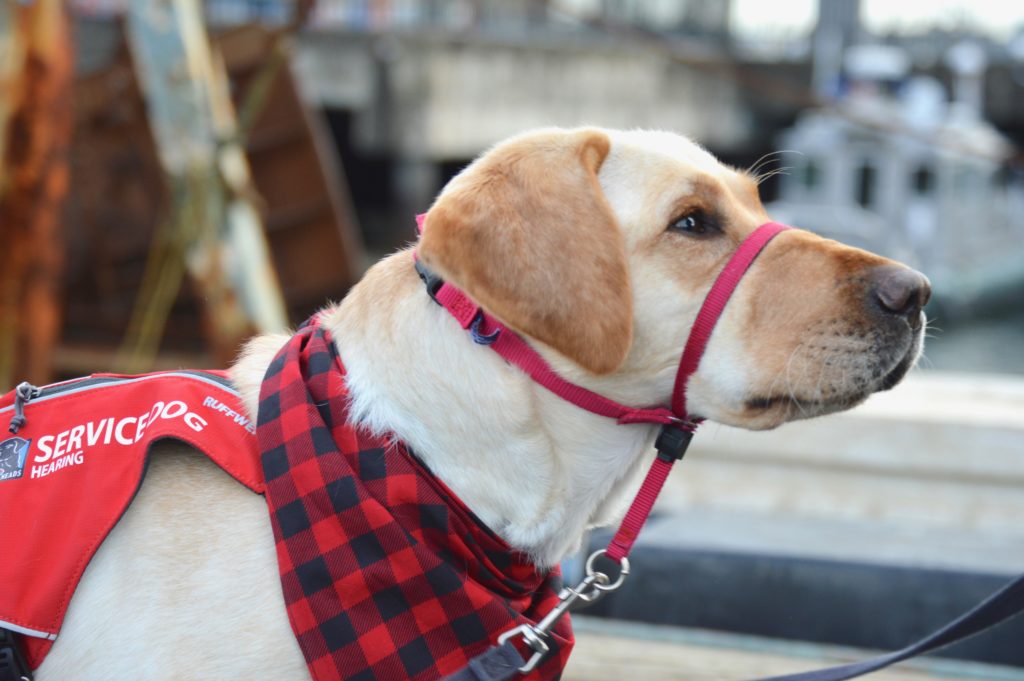 As Zoey, a service dog for hearing, walks through downtown New Bedford, she stays alert to her surroundings. Zoey is working whenever she’s wearing her vest and gentle leader, a type of head collar that leaves the dog’s mouth free to open, but makes it easier to walk the dog, especially for those who have limited arm strength.

NEADS trains service dogs through an extensive program and matches them with people who have hearing loss or physical disabilities. They also work with veterans who have PTSD or individuals with autism or other developmental disabilities. The service dogs, which are mostly black and yellow Labrador retrievers, are purpose-bred to assist humans, and their training starts early.

“Their socialization begins as early as three days old,” said Katy Harrison Ostroff, the manager of client services at NEADS. “That’s critical because we’re teaching them that the environment is a wonderful place. When something drops, that’s okay. You can’t have an anxious service dog in public. That wouldn’t work.”

The dogs will slowly be introduced to obedience task work as they age, and part of the dogs’ training incorporates plenty of opportunities to engage with the public. Zoey’s training was on full display as she walked through New Bedford. She remained friendly and calm when approached by another dog, but would respond immediately to oral commands.

NEADS’ hearing dogs may not be appropriate for everyone. While they’ve received extensive training, they are still a two-year-old, 50-to-75 pound dog that requires daily exercise. That involves playing fetch with the dog for 30 to 40 minutes every day, whether that happens in an enclosed yard, on a lead or in the home.

“It has to happen, especially for hearing dogs,” Ostroff explained. “They are sound-sensitive. Their brains are working all the time. You need to be able to give them that physical release.”

Through donations and grants, NEADS is able to match veterans, like Walton, with dogs without asking the client to fundraise. For civilians, they’re asked to fundraise $8,000 on behalf of NEADS. The agency has a dedicated staff person who helps clients in that process. NEADS has its own web-based donation platform to help streamline donations and can offer assistance for those who may not feel comfortable navigating the technology. 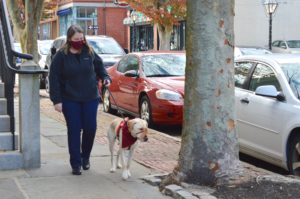 Ostroff said the motto at NEADS is: “right dog, right client, right time.” While the intake process, and subsequent training for the owner, is extensive, Walton has been able to achieve a level of independence that she felt like she was beginning to lose.

Walton said that for those who suspect they may be experiencing hearing loss, getting an exam is an important first step.

The MCDHH recommends reaching out to your primary care doctor as soon as possible if you suspect that you’re experiencing hearing loss or have experienced an additional drop in your hearing. Your doctor may refer you to a hearing specialist. Many of the local councils on aging work with audiologists who provide exams.

“You don’t know what you’re missing,” Walton said. “Go out and get your hearing tested. The audiologist will work with you. They will try to find some place that can help you.”

If you are experiencing hearing loss, there are numerous resources available to you. Start by talking to your primary care doctor or by calling your local COA or Coastline to learn about audiologists in the area.

The Massachusetts Commission for the Deaf and Hard of Hearing has published a comprehensive guide on hearing loss. Click here to read the guide.