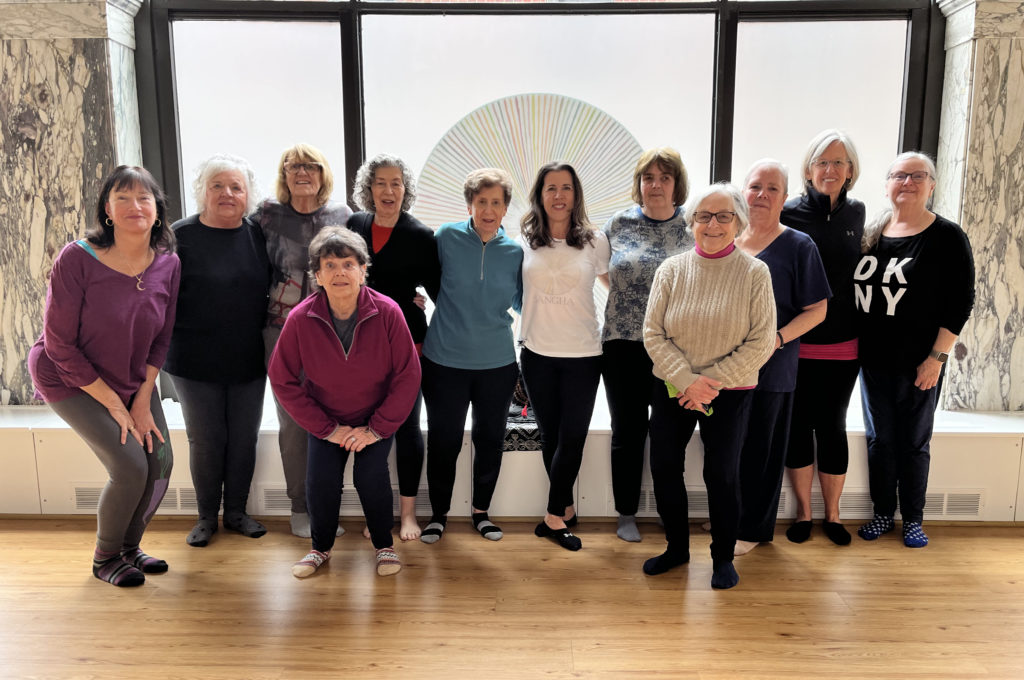 Yoga is well-known for its restorative poses, but the Tuesday morning chair yoga class for older adults at Sangha in New Bedford isn’t just about gentle movement. It’s physically, emotionally, and mentally inspiring for the group of about 15 older women who attend each week.

For Anne Boisvert, of New Bedford, the class helps her with knee pain and gives her a connected social experience with women she’s come to know well.

“I see the same people each week. We know each other. We know what’s going on in each other’s lives,” Boisvert said. “And it helps with my knee and posture. I think the mental health aspect of it helps me to be calmer.”

Yoga has increasingly been linked to mental health benefits including as a helpful activity to combat isolation.

Women’s yoga experience serves as a self-care technique for stress and experiences connected with depression, according to a 2013 Department of Health & Human Services published study that tracked 12 women with depression through a gentle yoga class. In the study, researchers found the class facilitated connectedness and shared experiences in a safe environment.

Boisvert had been paying for private yoga classes and was disappointed when told her knee injuries prevented her from joining a group class. After retiring, she searched for a class she could attend and discovered Nanci Winterhalter’s chair yoga group.

She never looked back.

The class atmosphere is open and friendly as women enter the studio each week, greeting each other by name and catching up on the week’s
events. It’s the kind of social connection that led the group to send a card to one member who had an injury, Boisvert said.

Yet for all the fun and camaraderie, participants and Winterhalter take the practice seriously.

A physical therapist who left her job behind when she began teaching yoga, Winterhalter uses her professional skills to combine an understanding of the body with yoga practices and postures. Her classes are a mixture of balance and strengthening poses, healthy tips, and lots and lots of humor.

On one Tuesday morning, Winterhalter checks in before class with a regular attendee who says she is feeling slightly dizzy. “No getting up
today,” Winterhalter tells her, suggesting she remain in her chair. “You’re here just to be with others.”

Later she encourages the class to create new habits for better health, like staying hydrated.

“We have to find new ways to nourish ourselves even if it’s not intuitive,” she tells the class. “You have to find that place between
ease and effort.”

Most importantly, Winterhalter stresses that class participants should pay more attention to their bodies than anything else, including her instructions.

“We’re old enough to do our own thing, right?” she says to laughter.