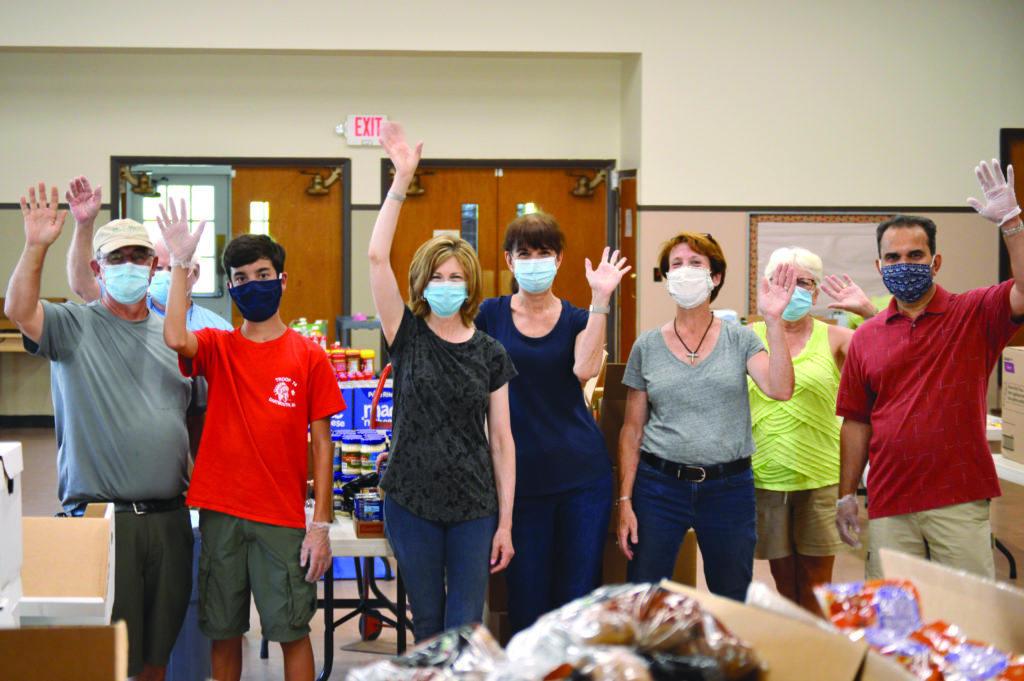 On July 21, Dartmouth United Outreach hosted its third “grab and go” food distribution event, which provides free boxes of food to anyone who needs it.

Lyn Dillies is used to making miracles happen. The award-winning illusionist has dazzled audiences for years – most notably, she’s made headlines for her show, “Your Vote is Magic!,” a campaign teaching audiences the virtues of voting in which she conjures an elephant and a donkey out of thin air.

Now with theaters around the country closed on account of the coronavirus, her traveling show has been placed on hiatus. And yet she’s still performing incredible feats, albeit offstage.

Dillies, along with her friends, family and neighbors, has transformed Smith Mills Christian Congregational Church in Dartmouth into a hub for food distribution.

What started back in March as a modest means to supply nearby senior housing with some extra paper products has turned into an extensive food bank, including a drive-through “grab and go” event on Tuesday nights. 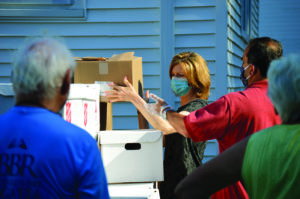 The first grab and go event started on July 7, but by that point, the group had been helping out South Coast citizens for months. Initially, the church was distributing another hard-to-find staple of the crisis: toilet paper. The church happened to have a surplus of toilet paper in stock, and they reached out to Dartmouth’s senior housing communities to keep them supplied.

The church wanted to do more for its neighbors, so they began assembling food packages.

“The amount of people in need kept growing,” said Dillies, who now coordinates food distribution at the church.

The effort quickly gained momentum, and several other churches joined together with Smith Mills to form a group they call Dartmouth United Outreach. The group, which also includes volunteers unaffiliated with the churches, now delivers food to senior housing and to families throughout the South Coast.

On July 21, the third time the group hosted a “grab and go” event, about 10 volunteers prepared for people to begin lining up their cars in the parking lot at 5:30 p.m. to receive boxes of food. Forty minutes before the event was scheduled to start, volunteers were already hoisting boxes into vehicles.

The Dartmouth-based church is just one of many locations around the country now offering food on a large-scale. The COVID crisis has especially strained food banks – and not just because of the increase in demand.

As consumers began picking store shelves clean, manufacturers and grocery stores were less able to donate their excess stock or manpower to food pantries. Back in April, the nonprofit Feeding America, which operates a network of 200 food banks nationwide, projected it would need an additional $1.4 billion to cover costs through the summer.

Through a partnership with the Salvation Army, Dartmouth United Outreach receives hundreds of boxes of non-perishable food items, and the group adds more to these boxes from their own stock. Dillies and her friend, Jackie Vangel, use the money they receive from financial donations to shop for these extra items. 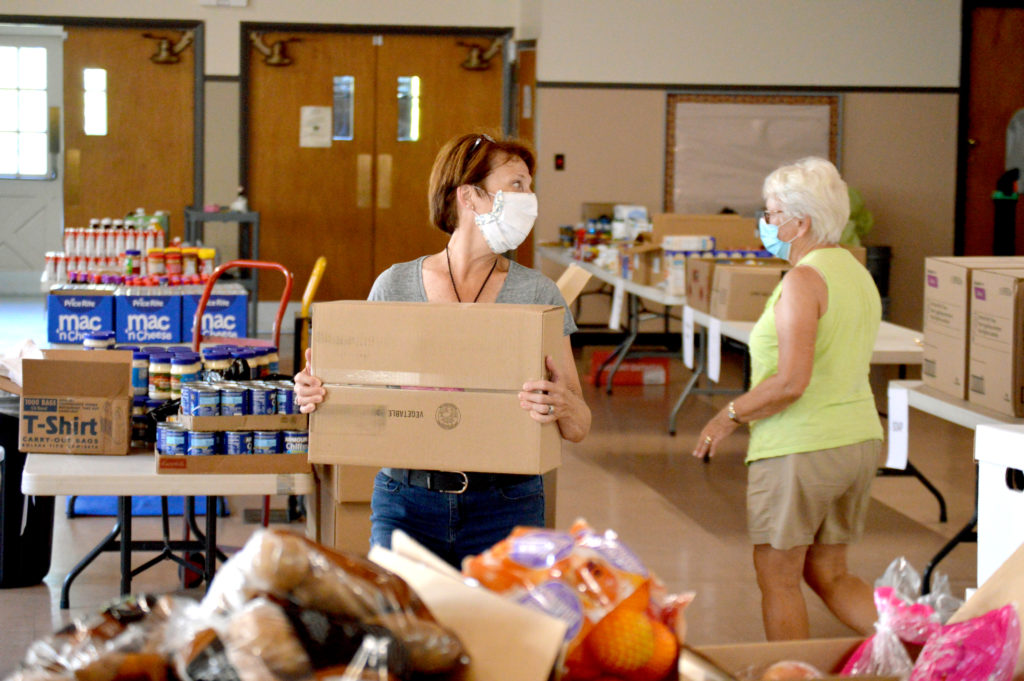 The inside of Smith Mills Church now has a “clean room,” where the outside of food packages are sanitized and volunteers inspect expiration dates. The main hall of the church is lined with tables piled with food and other supplies.

“When we first started it, we were running strictly on monetary donations and people dropping off non-perishable donations,” said Vangel. “Now that we’re getting these Salvation Army boxes, we look to see what’s in them, and we try to add to them.”

Dillies said Dartmouth United Outreach volunteers put their hearts and souls into the project for the public they serve.

“There are folks who are really struggling – and not just because of the safety issues, but financially as well,” said Dillies. “Lots of people are living paycheck to paycheck.”

As unemployment ballooned in America, so too did food insecurity. A recent report from The New York Times that compiled state data on Supplemental Nutrition Assistance Program (SNAP) enrollment found that more than 6 million people – a 17 percent increase – had enrolled in the program in the first three months of the pandemic.

“We’re concerned because if there’s another surge of COVID, I think we’re going to get busier,” said Dillies. “For the folks who are relying on us, we want to make sure they’re guaranteed a bag every week no matter what happens. We’re in it for the long haul until this pandemic is over.”

Smith Mills Christian Congregational Church, located at 11 Anderson Way in Dartmouth, offers free food at its Grab & Go event on Tuesdays from 5:30 to 7 p.m. You do not have to preregister, but masks are required. Food items are distributed until the church runs out.

Call Coastline at 508-999-6400 for more information about Meals on Wheels or follow Coastline on Facebook for more resources: www.facebook.com/CoastlineNB.