‘Cooking with Grandkids’ is Seeking Chefs 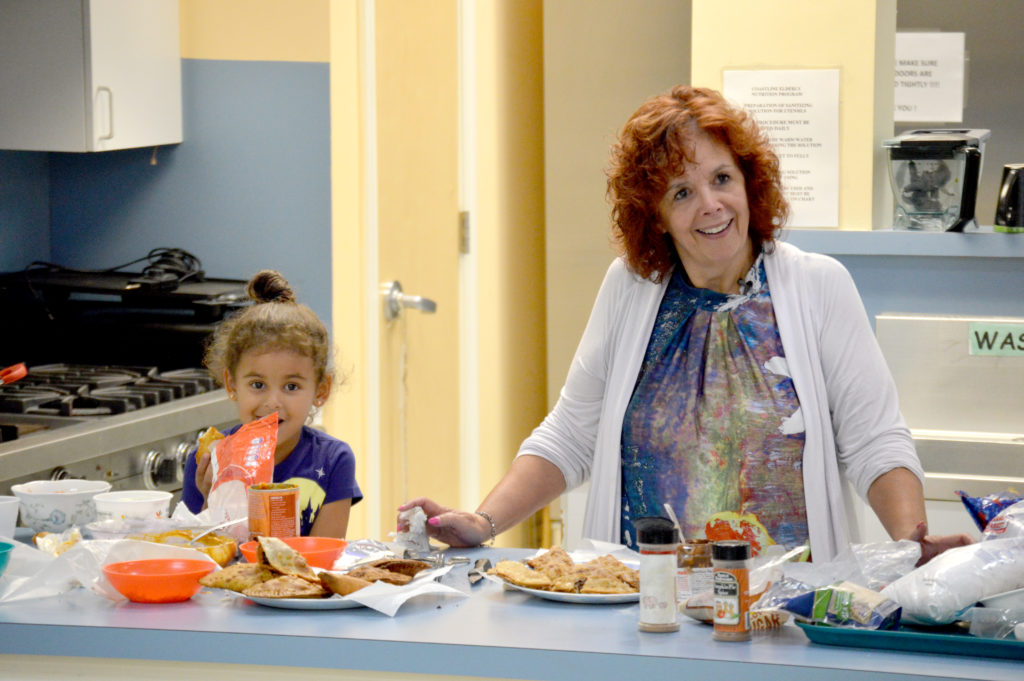 Fairhaven Council on Aging Director Anne Silvia (right) and her granddaughter, Evianna, filmed the third episode of “Cooking with Grandkids” in August. The show, which is produced by Fairhaven TV, is currently looking for guest hosts.

“Cooking with Grandkids,” a new cooking show filmed at the Fairhaven Council on Aging, brings grandparents and their grandchildren together for a culinary lesson.

The show was developed and is hosted by Anne Silvia, the director of the Fairhaven Council on Aging.

The show, which is produced by Fairhaven TV, wrapped up filming its third episode in August. The episode featured Silvia and her granddaughter, Evianna – or Evie, for short – as they prepared pastelitos. The show was filmed weeks before Evie entered kindergarten.

What sets the show apart from a typical cooking show is the relationship between the co-hosts. While Silvia is there to guide viewers through a recipe, Evie remains a typical five-year-old. She’s the kind of co-host who might stop everything she’s doing to pose dramatically for the cameras.

About 15 minutes into filming the show, Evie wandered from behind the kitchen counter to get a hug from her aunt who was sitting behind the cameras in the COA activity room. The film crew said it’s these moments that give the show its charm.

Bethany Fernandes, who films and edits the show for Fairhaven TV, said it’s hard not to laugh while the cameras are rolling.

“In the first episode, Evie was smelling what they were making. Anne asked, ‘Does this smell good?’ and Evie says, ‘Noooo!’ which is such a genuine reaction. The viewers thought it was funny, too,” Fernandes said. 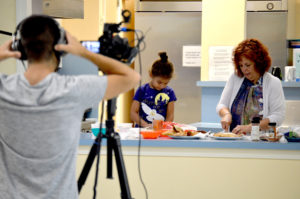 “Having a cooking show with your grandmother or grandfather – that’s special,” said Erick Sa, a videographer with Fairhaven TV. “Also, the show’s quite popular.”

He explained that Fairhaven TV will upload each episode onto a shared server that other public access stations can use.

“Cooking with Grandkids” has been picked up by nearly 30 stations throughout the state and as far away as Nevada.

With the holiday season soon approaching, Silvia is hoping to attract more people from the public who might have a favorite holiday recipe to share with their grandkids – and with their audience.

Silvia said they’ve had a hard time finding grandparents willing to come on the show as guest hosts because many claim to be camera shy. Silvia noted that she’ll be there in the kitchen to help out anyone who wants to be on the program.

For example, in the second episode, which featured a guest host and her two grandchildren, Silvia stands by and asks questions to keep the momentum of the show going.

“Just go with it and be natural, and it will all come together,” she said. “Plus, they can edit it – and they did a lot of that last time, I’m sure!”

The crew at Fairhaven TV is also eager to see more people from the community take part in the show and share recipes.

“We want to have it more frequently than once a month,” said Fernandes. “It’s a good story. You’re sharing a meal with your grandchild, and it’s something that’s dear to the grandparent.”

“Video is so special because you’ll always have it,” she added.

“Cooking with Grandkids” is currently scouting for talent. If you have a holiday recipe you would like to teach your grandchildren (and the numerous fans of the show) reach out to Anne Silvia at the Fairhaven Council on Aging at 508-979-4029.

View the show in the embedded clips below: