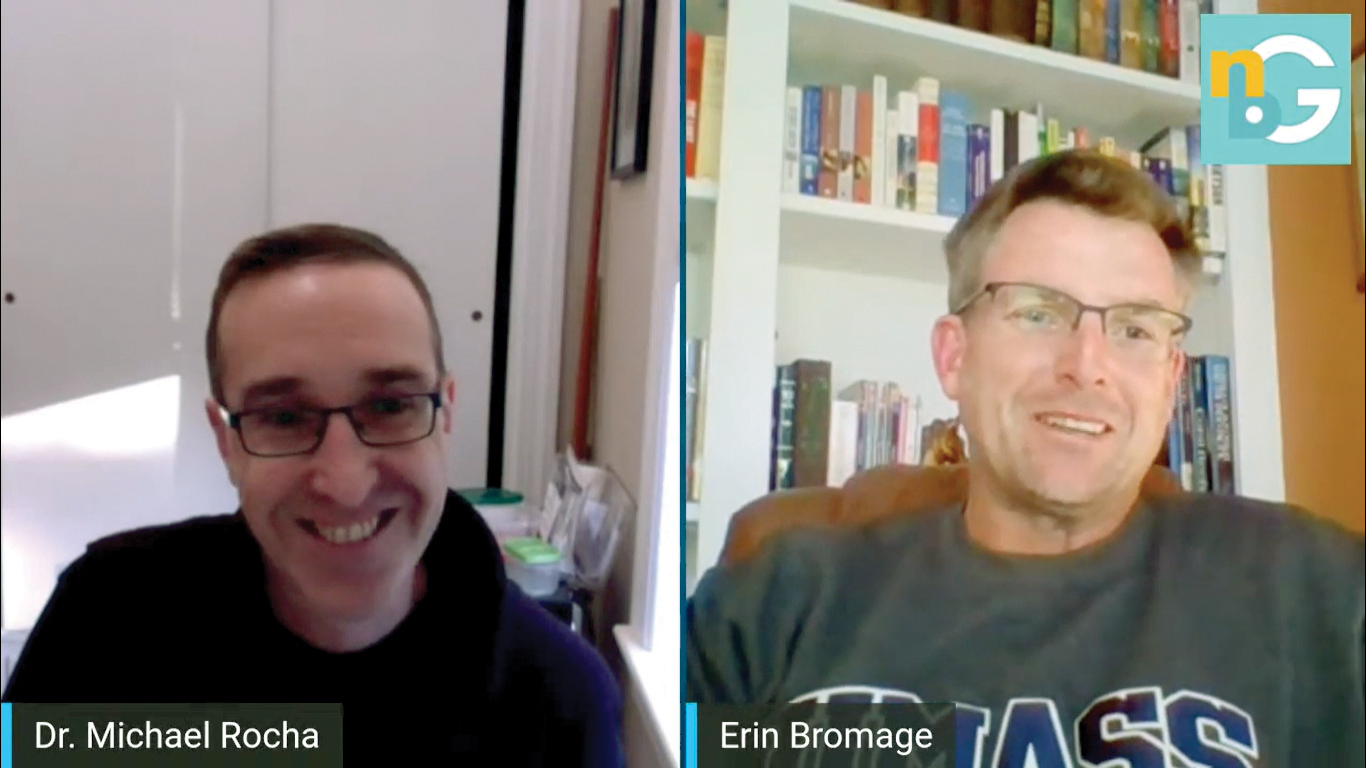 Dr. Michael Rocha recently interviewed Dr. Erin Bromage, an associate professor of Biology at UMass Dartmouth who researches the evolution of the immune system, about the ongoing pandemic.

In early May, Bromage published a blog post on his website, titled “The Risks – Know Them – Avoid Them,” that explained some of the dense scientific concepts surrounding COVID-19 in plain language. The post has since received more than 18 million views, and Bromage has been interviewed by a variety of major press outlets. Rocha spoke with Bromage on June 14 during a Facebook Live event, which was hosted by New Bedford Guide on behalf of the New Bedford Wellness Initiative.

During their conversation, the two discussed everything from the ethics of reopening the economy to safety measures consumers should consider while shopping. The following features Bromage’s remarks during that interview, broken down by topic and edited for clarity. The full discussion can be viewed on New Bedford Guide and the New Bedford Wellness Initiative’s respective Facebook pages.

Bromage, on the rise in case numbers around the U.S.
You hear in the news that there are [some] states that have increasing cases, and that seems worrisome. But in almost half of those states, the increase in cases is coming from testing. The more you test, the more cases you find. Testing and every extra person we pull out of circulation – that’s one less transmission chain. We shouldn’t be jumping all over the states that have increasing numbers because of increasing testing. The ones that we really need to focus on are the [states] whose testing is staying flat, but the number of positives they’re getting per test is increasing. When we look at Texas, Arizona, California, even Washington, they’re all increasing, and it’s not because of increased testing. There is something going on there.

Will the protests lead to outbreaks?
There’s almost no doubt that, with the protests, there’s going to be enhanced community spread, but we’re not going to see that for two weeks, possibly four. We will know when those 3,000 people go home and infect their household or their workplace, and the 3,000 becomes 10,000. While the protests themselves got my attention, [the number of new cases] may be masked in the general increase because we have people moving around with each new phase.

Masks are going to be the new normal for a while.
The data keeps streaming in that mask use is really important for lowering transmission chances. It’s not a one-shot wonder, but it’s going to go a long way to regain more of what we lost, just from wearing an extra piece of clothing.

How time and space factor into an infection.
Being infected is not a single step. It can happen in multiple, different ways. If I was face-to-face with you having a conversation, every time you speak, you’re puffing out respiratory droplets straight out at me. While I can’t see them, they are there. They can land in my eyes. I can breathe them in. That could be enough of a dose to [become] sick. It can happen from a brief encounter – a sneeze, a cough, a ten-minute conversation with somebody – but it can also be spending an hour or two in a room with somebody who’s infected.

On feeling safe during the reopening.
When I walk into a store, I look at the employees and I look at what they’re wearing, how seriously they’re taking it, and how their employer has looked after them. I went into one of the bigger box stores the other day, and I saw at least half a dozen customers without masks on, so I walked out and went to a different store. In Texas this past week, five of their restaurants that opened closed for another two weeks because they had outbreaks inside their restaurants. Why? Because they didn’t have the [personal protective equipment] – they didn’t have what they needed to be safe.

The safety vs. economy debate.
You have to address the biology to fix the economy. [In] Texas, you had restaurants rushing in fix the economy, but they didn’t focus on the biology of transmission. Any business needs to look at protecting their employees. If you protect the employees, then you’re protecting customers.

Reducing harm as the public continues to go out.
We know from sex education campaigns and drug-use campaigns that an abstinence-only policy doesn’t work. If you go on an abstinence-only policy, [people] don’t have the tools or resources to protect themselves. It’s the same thing with an infectious disease. If we say, ‘Stay home, stay home, stay home!’ and that’s the only message that we have, some get locked away in the house, and some go out without the toolkit they need to keep themselves safe. I’ve taken the harm reduction approach. We would prefer that you stay home, but if you are going to [go out], here are some strategies that you have so that you don’t become a statistic.

On the most at-risk populations.
Japan tracked clusters – large expanses of infections – and more than half of them started from people that were 20 to 29 years old. [Infections] started in that age group and then they went from that age group – who was very mobile, has lots of contacts, those contacts then had contacts – and then it ended up hitting [an older] population. Lots of people ended up sick and dying. We’re seeing that there is an important role of 20 to 40 year olds in this [outbreak] because they seem to have much less severe [symptoms] than most other people and go about daily business longer. They are the ones moving it around, and it’s hitting nursing homes, gymnasiums, meatpacking facilities throughout the country. We’re up to 40,000 infected workers in meat houses. Nearly 700 have died. These are young, fit people who are in conditions that are perfect for transmissions and getting a high dose of the virus. We know that the younger you are, the less severe [symptoms] that you have. But that doesn’t mean that you don’t have a role in this.

Why we shouldn’t be solely focused on fatality rates.
We know the mortality [rate], and we know it’s not very risky for people under 50. But we also know that people under 50 have it pretty rough. And we know that the lungs get beaten up pretty badly. When we look at the data from SARS from 2003, some of those people that were infected with SARS took in the vicinity of five to seven years to regain lung function. I think that’s part of the reason why we are protecting schools and protecting workers. Death isn’t the only measure. Quality of life – if you can’t enjoy a breath of fresh air because your lungs don’t work – that’s also important. It’s not about fear, and I’m not trying to make people stress out. But we don’t know enough to confidently say, ‘Let this just run through the 20 year olds, and we’re fine.’

Every decision is a calculation.
We all have a part in this right now. It’s up to us to keep Massachusetts going and keep it open. It’s the choices that we make that will make a big difference. Understand what this virus is and does, and modify your behavior to try to limit your chances of being exposed. The big [opportunities for exposure] are face-to-face conversations and indoor settings with lots of people for extended periods of time. They’re the things you need to avoid. And, if we do that, we bring the reproduction rate of the virus way down and we can cruise along with this until we can get a good treatment or vaccine.