Feeling Grace with the ‘Dance for PD’ Program 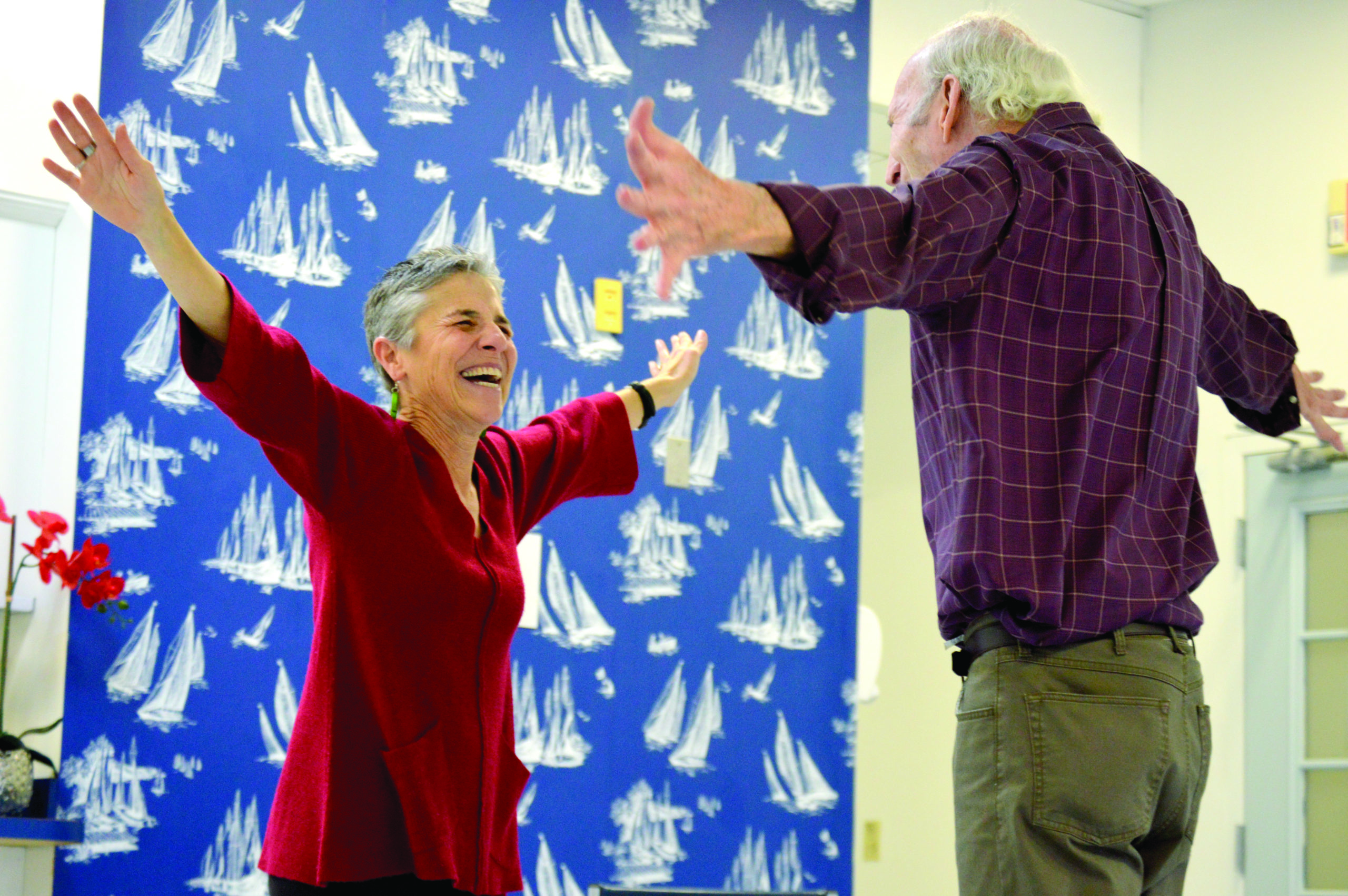 Rachel Balaban (left), cofounder of Brown University-based organization Artists and Scientists as Partners, leads Paul Fairbanks through a dance routine during Dance for PD, a program intended for those with Parkinson’s disease and their caregivers.

This article originally appeared in the February 2020 edition of Senior Scope. Article and photos by Seth Thomas.

As music from The Nutcracker begins to play, Rachel Balaban’s students swoop their arms toward the ground as they pantomime the motion of gathering snow. The dancers smile playfully at one another as they’re instructed to launch the “snow” they’ve gathered at one another.

Balaban’s class, Dance for PD, is intended for those with Parkinson’s disease and their caregivers. The program had its start in New York City in 2001, and has since spread throughout the nation and beyond. This winter, the program came to the Dartmouth Council on Aging.

The program uses dance to help participants with balance and motor skills and fosters a sense of community to stave off depression. Balaban is the cofounder of Artists and Scientists as Partners, a Brown University-based organization that bridges the space between medicine and the arts.

At the top of the hour-long class, Balaban eases her students’ concerns by noting that dance is nothing to be scared of. She’s not concerned if her students can’t remember their left from their right.

“This isn’t that kind of dance class,” Balaban explains. “This is about possibility, about what you can do and about feeling grace.”

Parksinson’s disease is a progressive neurodegenerative disorder that affects movement. Some of the telltale signs of Parkinson’s include tremors, impaired balance, and rigidity, which you might not know while watching Rachel’s students gracefully extend their limbs throughout the hour-long course.

As the disease progresses, people may experience memory problems, difficulty sleeping and depression. While drugs and surgery may stave off or temper some symptoms, there is no outright cure.

An increasing body of evidence has shown that exercise is vital for those with Parkinson’s disease. Balaban said that many of the dance movements help with coordination and flexibility.

“Let’s make this moment as joyful as we can,” Balaban said at one point during the class.

Research from the National Institutes of Health has shown that Parkinson’s patients frequently experience depression and social isolation. Researchers have linked loneliness to a myriad of health concerns, including heart disease, anxiety and cognitive decline.

Balaban emphasized that the bond that forms between the students is just as important as the actual exercise, and a prominent feature of the class is laughter and conversation.

While some of her students expressed some initial hesitation signing up for a class with the word “dance” in the title, the room frequently filled with laughs as the dancers discussed their week while sliding their feet across the floor.

“You don’t know you’re exercising. And it’s fun” said participant Elaine Youman. “I’m a physical therapist. That’s why I came – because I can incorporate what I’ve learned in Dance for PD in care.”

Participant Paul Fairbanks said he assumed the class would be more akin to partner dancing. He said the class, which was more interpretive, was a fun challenge.

“I feel like I accomplished something,” Fairbanks said, adding, “I forgot I had Parkinson’s.”

To learn more about the class or to sign up, contact Nancy Miller at the Dartmouth Council on Aging at 508-999-4717.