DANCING FOR JOY: Class for PD is open to anyone with mobility challenges 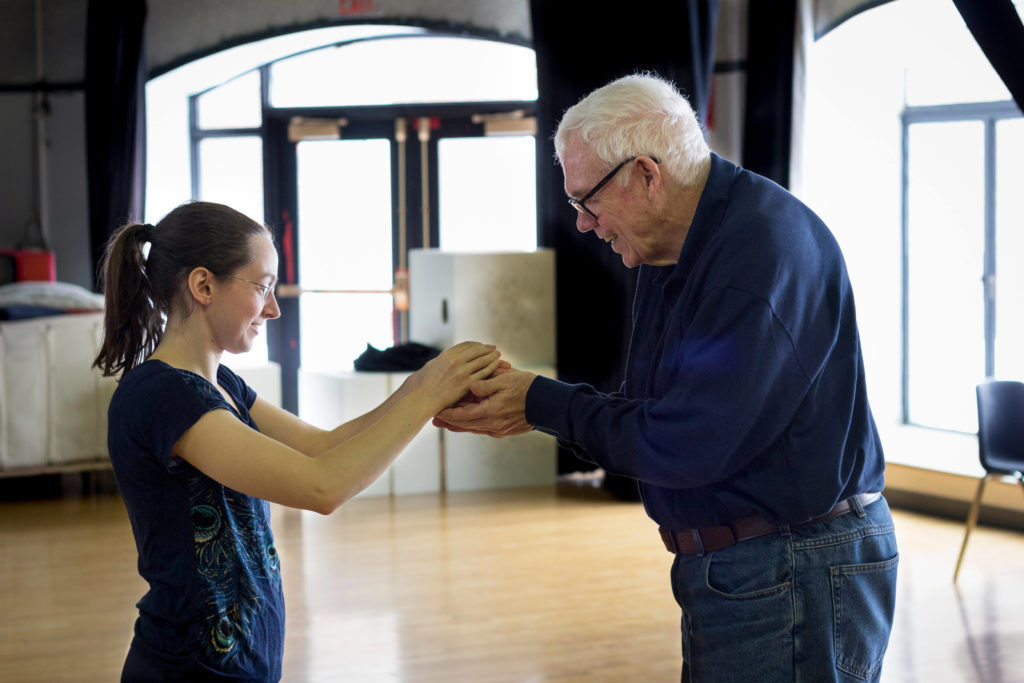 Nancy Briand wasn’t sure what to expect when she learned about a nearby dance class created specifically for people with Parkinson’s disease, but the retired Dartmouth school teacher thought she’d give it a try.

Briand had recently been diagnosed with the progressive disease, which affects balance and mobility, and was looking for ways to support herself. Dance for PD was interesting because it was designed to help those with Parkinson’s expand their range of movement, reconnect the mind and body, improve mental health, and offer a feeling of community, according to instructor and regional coordinator for the class Rachel Balaban.

Balaban teaches Dance for PD in Rhode Island and Connecticut as well as at the Dartmouth COA where Briand attends. She is the founder and director of DAPpers (Dance for All People) and an adjunct lecturer at Brown University.

Briand took to the class immediately and is still a regular. She appreciates the chance to move creatively, have fun, and connect with and learn from others who have Parkinson’s, she said.

“(Rachel) takes a theme and expands on it. I enjoy that aspect of it. It’s not strenuous and yet I know I’m using muscles when I’m here,” said Briand. “When I leave here my body feels great. It’s not stressed. She gives you a good feeling.”

Dance for PD was designed in Brooklyn, N.Y. and is a program of the Mark Morris Dance Group. It has been replicated all over, growing from its origins to be taught in 300+ communities in 25 countries, according to the group’s website.

While that growth is likely due to the research-based program’s ability to combine creative expression, music, and movement in ways that support Parkinson’s physically, mentally, and emotionally, it is likely also attributable to an ongoing increase in people being diagnosed with the disease.

According to the Parkinson’s Foundation, a Miami and New York City-based organization to improve care and advance research toward a cure, a growing number of people, approximately 60,000, are diagnosed with Parkinson’s each year. Nearly one million are living with the disease in the U.S. alone, with more than 10 million worldwide.

For Balaban, teaching the class is more than responding to a disease. It’s a pathway to reconnecting people to their bodies and to joy.

“My mission in all I’m doing is to help people find joy because it’s here, even with people who are very debilitated with Parkinsons,” Balaban said. “This is for people who just want to move and be in community and feel joy in their bodies. It’s there. We can dig down and find it.”

Some of that comes through the movements that help bodies physically shift and expand, she said.

“I see people shuffle into class feeling rounded and closed-in and leaving physically very different,” Balaban said. “We do a lot of movement to elongate and open.”

There are no requirements to join the class and participants don’t need to have any prior dance experience.

Balaban recalls a 94-year-old man who was devoted to the program and came until the end of his life, even asking his wife from his sick bed if they could practice getting into the car when he was better, so he could go back to dance. Although he was in a wheelchair with limited motion, he always found a way to move to the music, she said.

“You could see the life in him through his eyes.”

Another gentleman who had severe Parkinson’s symptoms used a cane and was typically very careful walking, Balaban said. Until once, she said, when “he saw we were starting to run through the piece without him and he started running across the dance studio floor.”

That spontaneous movement, helped by music and changing choreography, all contribute to getting participants to move beyond their limitations.
“There’s this sense of wanting to do more, wanting to push yourself, but not in a way that’s damaging,” said Balaban.

Connecting with that desire is important, according to Balaban, because people with Parkinson’s often reduce their movements through fear of injury.
“Parkinson’s has a psychological aspect to it. ‘I have fear of moving. I’m afraid I’m going to fall,’” she said.

But if you get wrapped up in the music, you forget the fear and just move, Balaban said.

Dartmouth COA Program Coordinator Nancy Miller said up until COVID hit, the center had several programs dedicated to Parkinsons: a boxing program, this dance class, and a support group. But social lockdowns and continued fears about the virus decreased the number of participants across the board and now, only the dance class remains.

“We do know the population’s there,” she said, adding that they hope to grow the number of dance class participants and perhaps restart the support group.

Balaban too is on a mission to reach more people with Parkinson’s but also to tap into another group she believes could benefit from the class – anyone who is aging.

“Parkinson’s is a window into early aging. So many of the symptoms people with Parkinson’s exhibit we will all exhibit at some age,” she said. “I want people to understand that people of all abilities are welcome here. All of us, at some point in time, are dealing with some mobility challenges.”