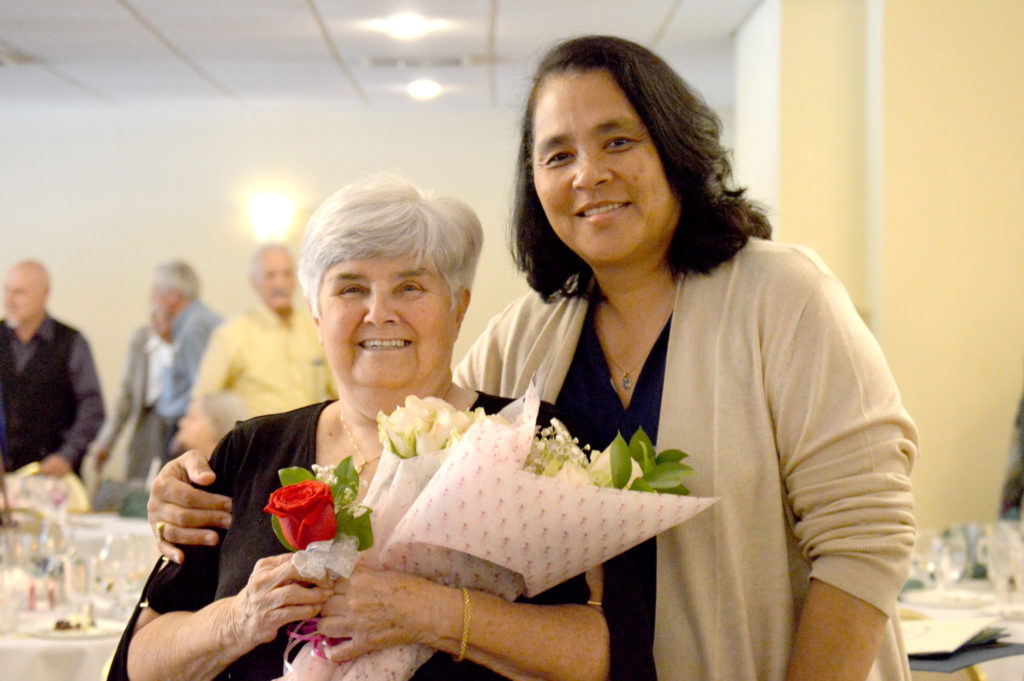 Mary Cadieux (left) has served as a volunteer throughout her lifetime. Currently, she volunteers at The Schwartz Center as part of Coastline’s Foster Grandparent Program. FGP Director Jacqueline Medeiros (right) nominated Cadieux.

This article originally appeared in the September 2019 edition of Senior Scope. Article and photos by Seth Thomas.

At a recent event honoring those age 85 and above, the commitment of older adults to their community and country was on full display.

The second biannual program, “Yesterday’s Children: Wisdom of Our Elders” honors residents from the Town of Dartmouth who have displayed a lifelong service to others. The event was once again co-hosted by the Dartmouth Friends of the Elderly, the Dartmouth Wanderers, and the Dartmouth Historical & Arts Society.

“We’re here to acknowledge great citizens among us who have made a difference in our lives, our community and in the lives of future generations through their legacy,” said Lara Stone, a former member of Dartmouth’s Select Board, during the ceremony, which drew a crowd of about 175 at Rachel’s Lakeside.

Back in 2017, when the program initially launched, the dozen honorees were age 90 and above. During this year’s event, the age restriction had been reduced to 85. The Friends sent a public request for nominees this past spring.

Maria Connor, president of the Dartmouth Friends of the Elderly, said the idea for the project came from Dartmouth Wanderer Joseph Barbero who spends his winters in Florida.

He saw that seniors were being honored for their accomplishments and thought the celebration could be brought back to the Commonwealth.
“The more we talked about it, the more we had to do it,” said Connor.

“We have fourteen nominees this year, and they’re all so diverse in what they’ve done,” she said. “We have people who were busy most of their lives but were able to find the time to give back to the community as volunteers. We’re honoring quite a few veterans as well.”

The event itself brings families together. Connor said the honorees had family members travel from outside the area to see their loved one receive recognition.

During the event, the 14 exceptional elders were treated to a meal, a slide show featuring snapshots of their lives, a speech from those who nominated them, and numerous citations from local and state government. The event was also recorded and will air on Dartmouth Community Television.

“I had a family that was involved in politics. It made me read the newspaper, and these are all names that I knew growing up just by reading what was going on in the South Coast,” said State Rep.Chris Markey.

“Sitting here today, listening to the stories about this generation and all they’ve accomplished for their families, community and country – here’s hoping that this [next] generation of young people may accomplish the same commitment to service. We would be all better off,” Jackman said. 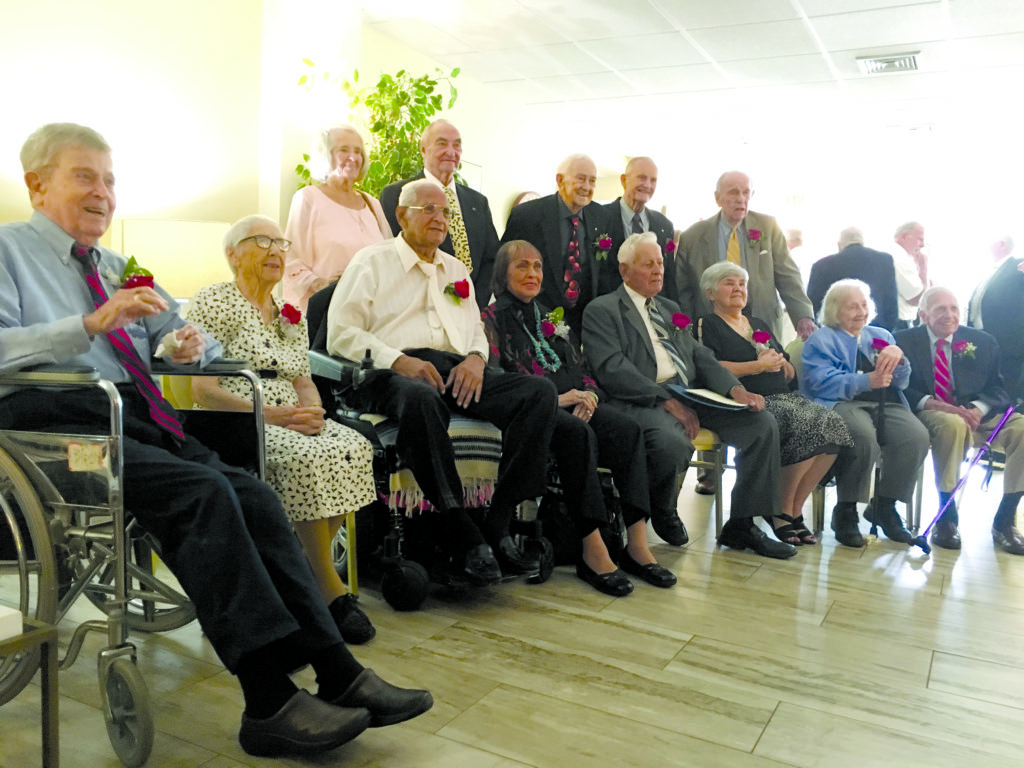 Below is a list of the honorees and a brief summary of their many accomplishments:

Edith Andrews: An educator, lecturer and cultural historian who has served and is serving on a variety of boards, committees and associations. Andrews is a member of the Wampanoag Tribe of Gay Head (Aquinnah) who has been involved with Native American affairs throughout her lifetime.

Joseph Barbero, Jr.: A graduate of the Greater New Bedford Regional Vocational Technical High School who served in the U.S. Army in Germany in 1948-49 and served in the Korean War from 1950-51. He worked as an algebra/geometry/physics teacher at New Bedford Voc for eight years, and eventually served as the school’s director from 1973 until his retirement in 1983.

John Bettencourt, Sr.: Bettencourt has been instrumental in the operation of Bettencourt Farm, which has been in his family for 100 years. According to his family, Bettencourt’s farm was the first to utilize automatic milking power in Massachusetts.

Eleanor Brooks: Eleanor is a graduate of Dartmouth High School who spent much of her professional career working at Dartmouth High School, where she worked as a secretary in the guidance department. Known for her kind demeanor, her son said at the presentation that the class of ’71 dedicated their yearbook to her. She retired in ’93 and worked part-time until 2008.

Thomas Brooks: Thomas served in the Marine Corps from 1946-48 and has been involved in a variety of groups throughout town. He was a Town Meeting member throughout much of the ‘50s and ‘60s and served as the Chief of Fire District #1 from 1970-1984.

Mary Cadieux: Cadieux is a mother of 12 children, grandmother of 27 and great-grandmother of 19. She has been an active volunteer throughout her lifetime. She has spent the past nine years volunteering at The Schwartz Center, and the past four years she has done so through Coastline’s Foster Grandparent Program.

Doris Davenport: An active churchgoer who has spent years volunteering and raising money for her church. She also taught Sunday School at Smith Mills Congregational Church.

Robert Makin: After joining the Air Force after high school, Makin returned to the area, working at an insurance company in Boston, then in New Bedford. He eventually became a partner of that agency, Humphrey, Coville & Coleman.

Barbara Plant: A lifelong dog lover who would bring Norwegian Elkhounds in for visits at Brandon Woods. She started rescue efforts for that particular breed of dog and estimates that she has helped place about 50 Elkhounds in new homes. She has received awards for her animal rescue efforts.

John Silva: He joined the Army at age 18 and drove a supply truck to deliver goods to soldiers in the front lines. He served in England, France, Belgium, Holland and Germany.

Raymond Souza: After completing basic training in 1944, Souza went on to lead an extensive military career. In Dartmouth, he coached youth sports, served as the secretary of the Dartmouth Youth Activities Association and served on the Dartmouth Board of Appeals for 46 years.

Robert Zeida: A licensed amateur radio operator who went on to become a volunteer at the Talking Information Center, a Marshfield-based nonprofit. He has spent three decades reading for the visually impaired through the TIC.