The Dartmouth Senior Center has been renamed to honor the longtime advocacy and fundraising support of Maria Connor, current president of the Dartmouth Friends of the Elderly. 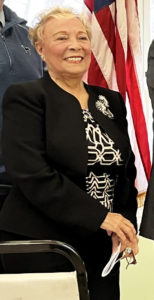 r Active Living recognizes Connor’s dedication to supporting and empowering older adults over five decades and, at the same time, reflects the shift in how people are thinking about aging, according to Council on Aging Director Amy DiPietro.

The name change became official with the approval of the Select Board on March 14 and will be celebrated publicly later in the year.

The choice to honor Connor was an easy one, said DiPietro. “There’s no better person out there who has given so much. She’s dedicated her life to empowering seniors.”

This year alone, Connor has been instrumental in raising more than $70,000 for the COA, according to DiPietro. Over the years she’s been part of the Friends of the Elderly, she has brought in hundreds of thousands of dollars, she estimated. Connor’s fundraising leadership paved the way for multiple Senior Center improvements including a five-car garage, updates to the Veterans Memorial Grove Gazebo, adding a driveway to the front of the senior center, and more. She supported four extensions to the senior center building and helped create the Bullard Wellness Center on the property.

Inside the building, she’s led the effort to create new amenities and beautify the space. “Everything you see – new floors, paint on the walls, some of the furniture – is because of her efforts,” said DiPietro.

Connor has said a prime focus for her work has been creating or improving infrastructure to support better COA experiences. Her work has included support for new housing for veterans and older adults as well as fundraising for other services in the region.

Her projects benefited from the work of many, frequently including students from the Greater New Bedford Regional Vocational Technical High School. She worked in social services for most of her career, is a licensed social worker, and serves on Coastline’s Advisory Council.

“The existing senior center would really not be what it is today without Maria’s fundraising skills. As the president of the Friends of the Elderly she’s been able to use the platform to do so much. She really is the go-getter when it comes to fundraising,” said DiPietro.

The name change does more than honor Connor, it reflects a growing change in how people think about aging and consequently, in the role COAs play among older populations, according to DiPietro.

“The past few years, we have been turning our focus to the health and overall wellbeing of older adults. We really want to start educating people at a younger age and a lot of our programs focus on that newly retired senior.”

“We’re getting rid of the stigma that it’s an old-folks place,” she added. “I don’t even know their age anymore because they could be 65 or they could be 78. There’s really no difference in the people who are living that active lifestyle.”

Connor said she feels honored for the recognition.

“It is an honor and as long as I’m around I will continue to improve the infrastructure, not only for those that we’re providing for but for the next generation of seniors coming up. We should be prepared for them,” she said.

“I’m doing what my parents told me to do, ‘Leave things better than you found them.’”