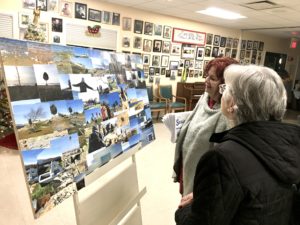 Anne Silvia, director of the Fairhaven Council on Aging, is planning to retire in early 2022. In this photo from 2019, she admires a finished mural that was created by COA patrons and 8th grade students – one of many projects she’s helped to coordinate during her 10 years as director. She credits her vast network for helping to expand programs at the center.

As the director of the Fairhaven Council on Aging, Anne Silvia has coordinated art projects, launched a cooking show and spent the holidays ensuring her neighbors had a meal despite the pandemic. And now she’s embarking on a new path: retirement.

Silvia, who has served as the COA director for the past decade, will be retiring in January. The job was posted in late 2020, and the hiring process will continue into the new year. Silvia said that after a candidate is selected, she intends to help the new director acclimate to the center for a few weeks thereafter.

As she prepared for her final weeks with the Fairhaven COA, Silvia sat down with Senior Scope to reflect on her experiences working with the community.

“It was a fast ten years, I’ll tell you,” said Silvia. “Everything changes so much in ten years. Then it goes by and you think where did it go? It was an action-packed, fun-filled ten years.”

Prior to working at the council on aging, Silvia spent more than 15 years in long-term care facilities as a licensed practical nurse. After a brief stint working at a substance abuse center, she transitioned to Active Day of New Bedford, an adult day services program, where she worked for a decade.

“That was such a fun job. It was nursing, but it was a lot of hands-on activities. Arts and crafts. Trips. So many fun things,” she said. She later became the director of Active Day, where she learned more about resources in the community, which would help her when it came time to lead the COA.

“I had a nursing supervisor a long time ago who said, ‘Whenever you leave a job, make sure you take something with you’ – and not something like a computer,” she laughed. “You learn something and you take it with you to the next job.”

About six months after taking on the COA director role, Silvia launched one of the first of what would become many programs centered around gathering for a meal and socializing. The Single Senior’s Supper Club, which at the height of its popularity could draw up to 80 people, was inspired by an article Silvia had read regarding a man based in the Cape who committed suicide.

“He left a note, and the only thing on the note was, ‘I can’t bear to eat one more meal alone.’ How many people are in that frame of mind?” said Silvia. She reached out to Philip Beard, the director of Coastline’s Nutrition Program, and coordinated to have meals delivered to the center for the new program. As the months went on, and more and more people starting showing up, she quickly realized they weren’t just coming for a meal.

“It was about the camaraderie,” she said. “They sat at the same tables. It was the same group of friends. I’d be in the kitchen getting food ready, and you could hear them laughing and laughing.”

Adapting to the pandemic became an unexpected challenge in her final years at the COA. The center, which regularly hosts meals during the holidays, relied instead on volunteers to either deliver packages door-to-door or at drive-through events.

Not long after the pandemic began, Silvia was already coordinating door delivery during Easter. That continued during the holidays – Veterans Day, Thanksgiving and Christmas.

“We tried to keep spirits up during the whole horrendous COVID year,” she said. When it was clear the coronavirus was here to stay, the special holiday deliveries continued into 2021.

Reflecting on the past decade at the council on aging, Silvia said she was thankful for the hundreds of people she has met along the way who supported the patrons of the center, whether they were volunteers, representatives from outside agencies, or those from within the municipality.

“The organizations all throughout the South Coast – the assisted living centers, the agencies that provide home health care, Coastline – the amount of community support that’s provided to the COAs is outstanding. We’re lucky to have such dedicated people in the community,” she said.

She’s also thankful for the people who visit the council on aging. She noted that anyone is welcome at the center, not just residents of Fairhaven, which has meant she’s met people from all over the state and New England.

“I want to thank them from the bottom of my heart for sharing their life with me,” said Silvia. “It’s been an amazing gift to have so many new friends. They know where I live – I’m a Fairhaven girl! If they need me, they know where to find me.”