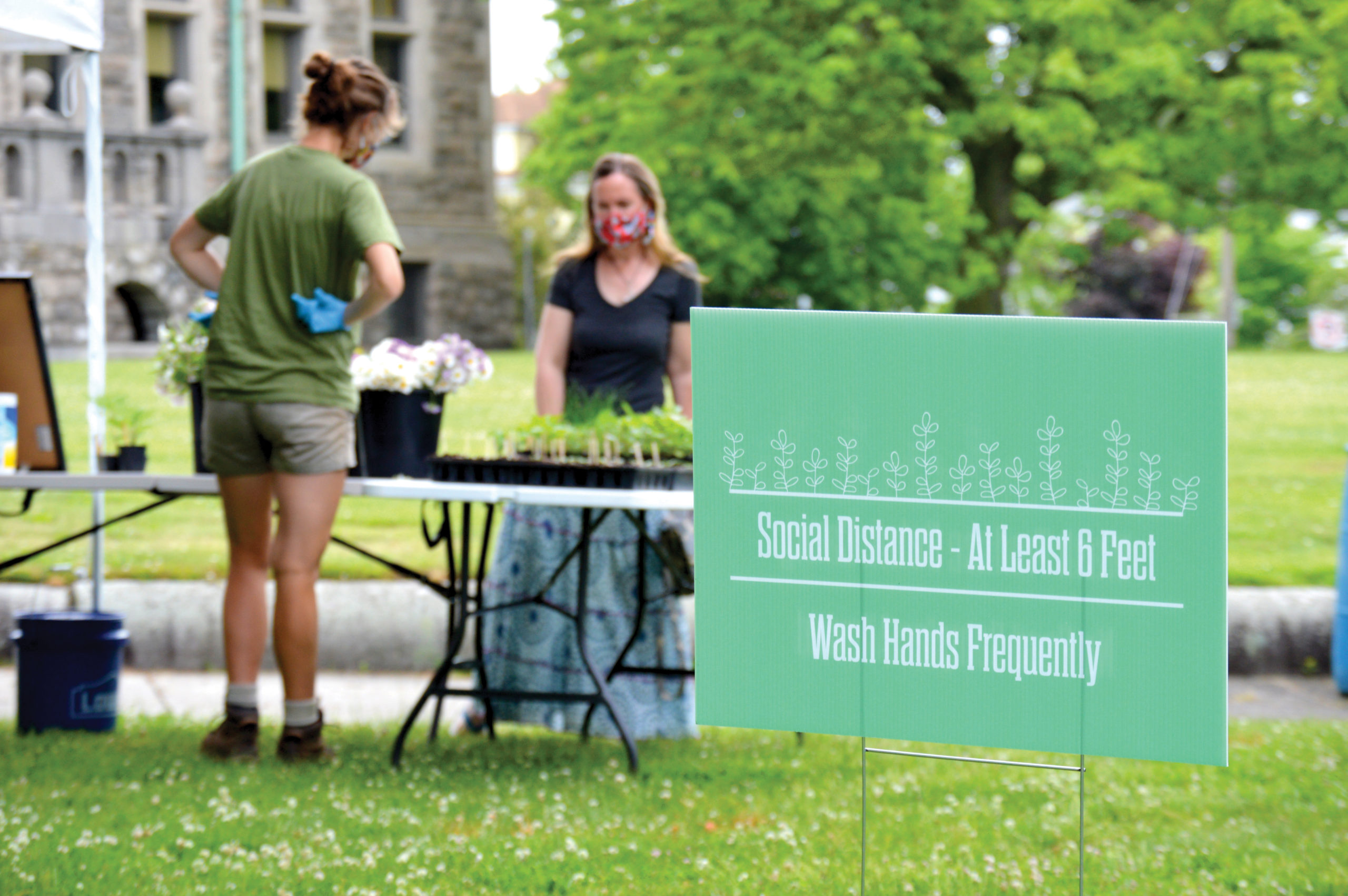 Huttleston Marketplace, located next to Fairhaven High School, returned on June 6. The market initially opened during phase one of the reopening. By its second week, the state was in phase two, and Huttleston Market welcomed back more vendors.

This article originally appeared in the July 2020 edition of Senior Scope. Article and photo by Seth Thomas.

Summer is back, and so is farmers market season. But with COVID-19 still posing a threat, this year’s outdoor markets will have to be enjoyed from behind a face mask.

Much of the planning for this year’s market season started prior to COVID. Chris Richard, Director of Tourism in the Town of Fairhaven, said some vendors had dropped out as the severity of the crisis took shape.

But the market will continue this year regardless — with a few extra considerations in mind on account of the pandemic. The booths are now spaced farther apart, masks are required for vendors and customers, and sellers are asked to regularly clean their areas and use hand sanitizer.

“Overall, I’m going to lose about a third of my available space, but at least we can still have the market,” said Richard.

The Huttleston Marketplace officially opened on June 6, while Massachusetts was still in the first phase of its reopening. The market was only allowed to sell food items at the time, and the crafters would have to wait for “phase two.” By the end of June, the market had expanded to more than 50 vendors, including food and crafters.

“Hopefully, next year we’ll be able to go back to what we’ve always done,” said Richard, during the opening day of the market. “I don’t know if we’re going to have too many people showing up because everyone has been cooped up for months, or if there’s going to be too few people showing up to make it practical for the vendors.”

Richard did warn that if customers are unable to practice social distancing or refuse to wear face masks while at the market, they will have to cancel the season.

Being an outdoor space with plenty of room, however, should give customers ample room to keep their distance.

“Each week, we’re going to be playing it by ear,” he said. “So far, there hasn’t been a single problem.”

Roxanne Rupkus, owner of Roxanne’s Garden Center, was there during the opening weekend selling plants and organic soap. Something new graced her table this year: cloth face masks, which she was selling for a friend.

She was happy to be back out at the farmers market, even it was a little different this year.

“I’m making money, and I’m going to be spending it here and there, so the money’s flowing, which is what we need to do,” she said Rupkis, in between selling potted daisies to shoppers. “Even if it isn’t a lot, we’re helping smaller businesses survive in these tough times.”

She said that in a normal year, she would have been selling pansies out of her Fairhaven-based greenhouse by March. When she finally opened her greenhouse to customers for Mother’s Day, she had to follow similar rules like those found at the grocery store, including one-way aisles and requiring customers to wear personal protective equipment.

Coastline distributes Senior Farmers Market Nutrition Program coupons to the South Coast councils on aging. Contact your local COA and ask about the coupons, which should be available by mid-July.

Huttleston Marketplace is open on Saturdays through Sept. 12 from 10 a.m. to 3 p.m. The market is located on the lawn next to Fairhaven High School at 141 Main Street in Fairhaven. Everyone must wear a mask and practice social distancing. For a complete list of the market’s health precautions, visit: fairhaventours.com/huttleston-marketplace.

While shopping, ask the individual vendors if they accept SNAP, WIC or Senior Farmers Market Nutrition Program coupons. Contact your local Council on Aging for more info on SFMNP coupons.