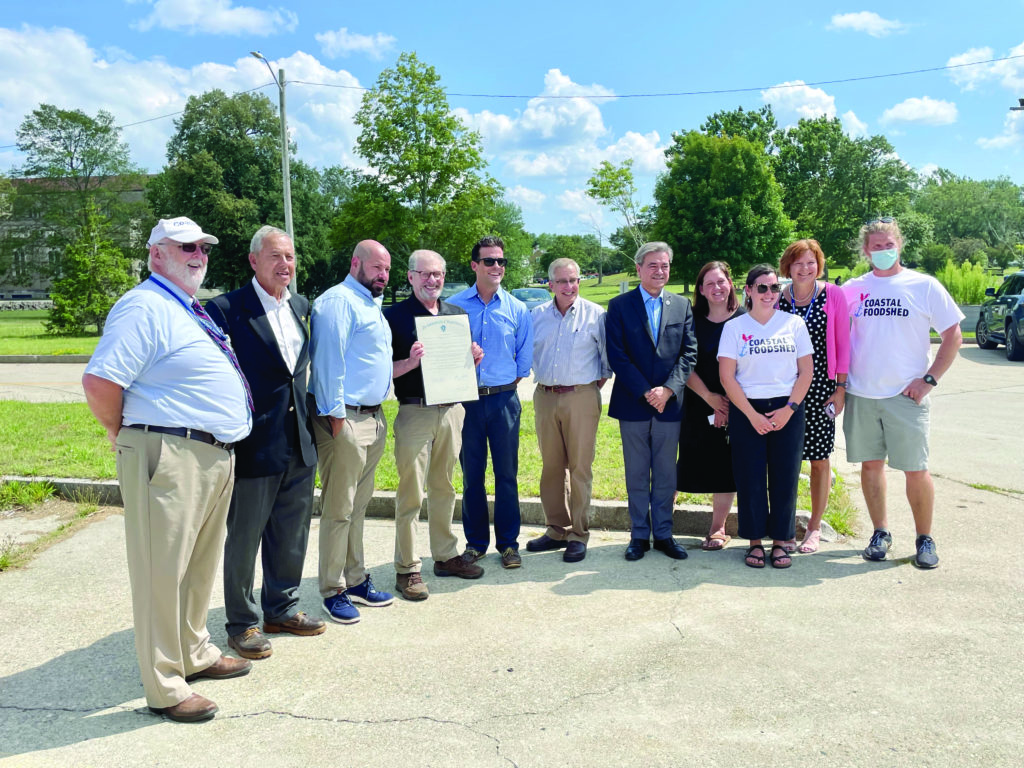 Governor Charlie Baker declared the first week of August “Massachusetts Farmers Market Week” in honor of the role that farmers markets play in supplying the public with locally sourced food and to recognize the contributions farmers and food producers make to the state’s economy.

Coastal Foodshed is a nonprofit that operates various farmers markets in New Bedford, as well as an online market, which began as a response to the pandemic in 2020.

“We realize how important farmers markets are as a distribution point for our farmers and our consumers,” said Lebeaux to a long line of shoppers at the Brooklawn Park market.

Lebeaux said there are over 200 farmers markets operating throughout the Commonwealth. Massachusetts is fifth in the nation of consumers buying directly from farmers, accounting for more than 20 percent of all the agricultural sales in the state on an annual basis.

In Bristol County alone, there are about 700 farms producing more than $35 million in agricultural product each year. The products sold at Coastal Foodshed’s markets are sourced from about 50 local farmers and vendors.

“Coastal Foodshed plays an important role in New Bedford, making it easier for many households to access local fruits and vegetables without having to find transportation to drive to farm stands or orchards in neighboring towns,” said Stephanie Perks, the Co-Founder and Executive Director of Coastal Foodshed.

“Additionally, many farmers don’t accept SNAP benefits at their farm stands, and an important part of our mission is to ensure SNAP households can use their benefits to purchase local foods – which they can at all of our farmers markets,” she said.

Last fall, during the SouthCoast Food Security Summit held at UMass Dartmouth, the president of Project Bread, a state-wide anti-hunger organization, urged those struggling to access food to sign up for food relief programs that receive federal funding, including SNAP, WIC, school meal programs and Meals on Wheels, which are often underutilized by the public.

Abigail Hevey, the Manager of Grants and Development at Coastal Foodshed, said a major goal of the organization several years ago was to allow for more diverse payment options at their markets. Today, vendors accept credit cards, SNAP, WIC and Senior Farmers Market Coupons.

Philip Beard, Coastline’s Elderly Nutrition Program Director, said Coastline had distributed about 900 senior coupons this year, some of which were used to buy produce directly from farmers, which was later delivered directly to consumers in senior housing.

To help residents afford fresh produce at farmers markets, the state operates the Healthy Incentives Program, which enables SNAP participants to stretch the amount that can be spent when buying fruits and vegetables. If you live in Massachusetts and receive SNAP benefits, you are automatically enrolled in HIP.

You can earn HIP incentives when shopping at farmers markets, farm stands or mobile markets using SNAP. Traditional grocery stores or convenience stores do not participate in HIP.

Not long after Farmers Market Week, the Biden administration approved updates to SNAP, giving recipients more money to work with each month. The update was made to help the program keep pace with the cost of living and marks the single biggest increase in the history of the food assistance program.

According to a 2020 report from the U.S. Department of Agriculture, the average SNAP household redeemed more than three-fourths of their benefits by the middle of the month. Beginning on Oct. 1, the national average SNAP benefit will increase by about $36 per person each month.