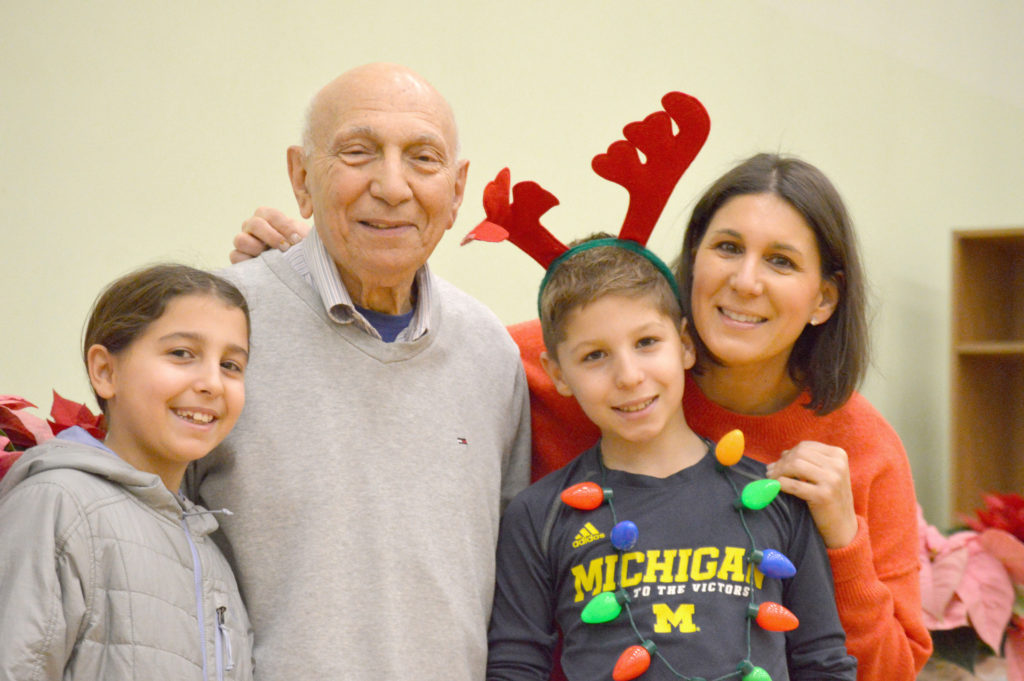 This article originally appeared in the January 2020 edition of Senior Scope. Article and photos by Seth Thomas.

As the congregation was departing from the Holy Name of the Sacred Heart of Jesus Church following a Christmas-morning mass, citizens from around the South Coast began making their way into the parish hall next door, which has become the site of a holiday tradition that stretches back for half a century.

On Christmas Day, the Jewish community serves a group meal to anyone who’s interested in attending. In addition to the dozens of people gathered at the hall, the group of volunteers delivered about 180 meals to Meals on Wheels recipients and others.

Initially started by the late New Bedford Council on Aging Director Jacob “Jack” Gould, the project is now managed by Ellen Hull and Stanley Levine, who have been volunteering at the event since they were teenagers. Hull estimated that about 80 volunteers took part this year, whether they were setting up, delivering meals or serving.

The project has gone through several changes throughout its decades-long history.

“Years ago, when it first started, they made everything from scratch,” said Levine.

Volunteers would start cooking turkeys at 5 a.m. to get ready. Levine said that as volunteers aged, it became more challenging to cook the meal on-site. So in more recent years, the group partnered with the Bristol County Jail and House of Correction.

“They prepare food at the jail, and we go out at 8 in the morning and pick it up,” said Hull. The food is brought back to the church, where they package the meals for delivery. By 10:30 a.m., more than half of the meals are out the door for delivery, and more volunteers will begin to arrive to serve the remainder.

Everyone who attends can expect a take-home package that includes leftovers, fresh fruit, bread and cookies.

The celebration is made possible through donations from the Jewish community, which purchases the meals from Bristol County Jail, as well as donations from a myriad of local businesses. Coastline provides the delivery routes for the drivers and paper products. D&D Caterers Inc., Friendly Fruit and New York Bagel donate food. A knitting group from the Dartmouth Council on Aging contributes hats, gloves and an assortment of gifts for guests.

Many of the volunteers running around with pots of hot coffee and platters of food have been volunteering for years. Gabriel Kaizerman started half a decade ago when he and his twin sister, Karly, were five years old. Gabriel’s mom, Essie, said she’s been volunteering on Christmas Day since she was a teenager. Her father, Ray Aghai, now in his 80s, initially got involved with the project through his synagogue, and he was busy that morning carting food back and forth from the parish hall kitchen.

“My parents are very much about giving back to the community,” said Essie. “It’s a good way to spend the day together.”

“It’s nice to do things for other people,” said Gabriel, in between calling off raffle winners. 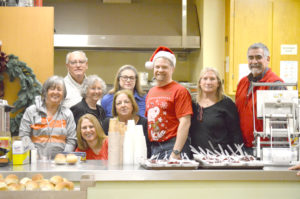 Volunteers gather at the kitchen inside the parish hall located next to New Bedford’s Holy Name of the Sacred Heart of Jesus Church.

Both Carolyn Moore and George Barrows had never attended the meal before, and both were glad they did. The two were chatting with Russell Chamberlain, who was dressed as Santa Claus, as servers started making their way around the tables.

“This is nice because you get to meet new people, and it gets you out of the doldrums,” said Moore, a resident of Acushnet. “It gives you a chance to meet new people. I met George today. I went to sit down, and I saw that he was sitting by himself, and I asked him if he wanted company.”

Barrows, a New Bedford resident, said last Christmas came and went like any other day. His wife had passed on Palm Sunday in 2018, and he recalled watching game shows on Christmas morning.

“Since my wife passed, I’m just by myself,” said Barrows. “I figured I’d come down and see what’s going on because otherwise, I’d be home watching television.”

“It’s a good day,” said Hull. “On Christmas, there should be a feeling of joy and people caring for one another. It’s our way of trying to take care of a little piece of our community.”