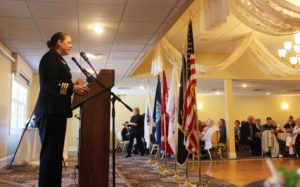 onth with veterans, supporters, and local and elected officials. The well-attended event is held each November by the Friends of the Elderly to thank and recognize veterans for their service.

The ship was launched in 1797 and celebrated its 225th birthday just a few weeks before the event.

“Today, I have a crew of 80 active-duty sailors,” Farrell told the audience.

Of the six frigates constructed under the Naval Act of 1794, the U.S.S Constitution was the third and the only one left standing. It remains undefeated in conflict.

For Farrell, the symbolism behind these facts – that this ship survived the longest and that it is her duty to “preserve, promote and protect her legacy”- is a powerful motivator.

“I’m in awe that the one that is left standing carries the name and responsibility of the document that governs us on a daily basis,” she said.

U.S. Rep. William R. Keating spoke directly to veterans in the audience, saying he is concentrated on medical research, medical resources, and medical health for all veterans. He praised the passing of the PACT Act which expands health care and benefits for veterans exposed to certain toxic substances.

“Too many veterans…died after being afflicted with these kinds of contaminants while they served our country,” he said. 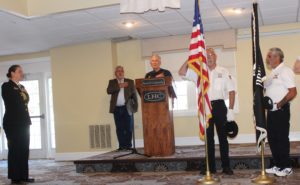 In his remarks, Rep. Chris Markey thanked veterans and those in attendance, telling the group, “The people in this room are the people I think about when I make decisions.”