It’s Time to Get the Flu Shot 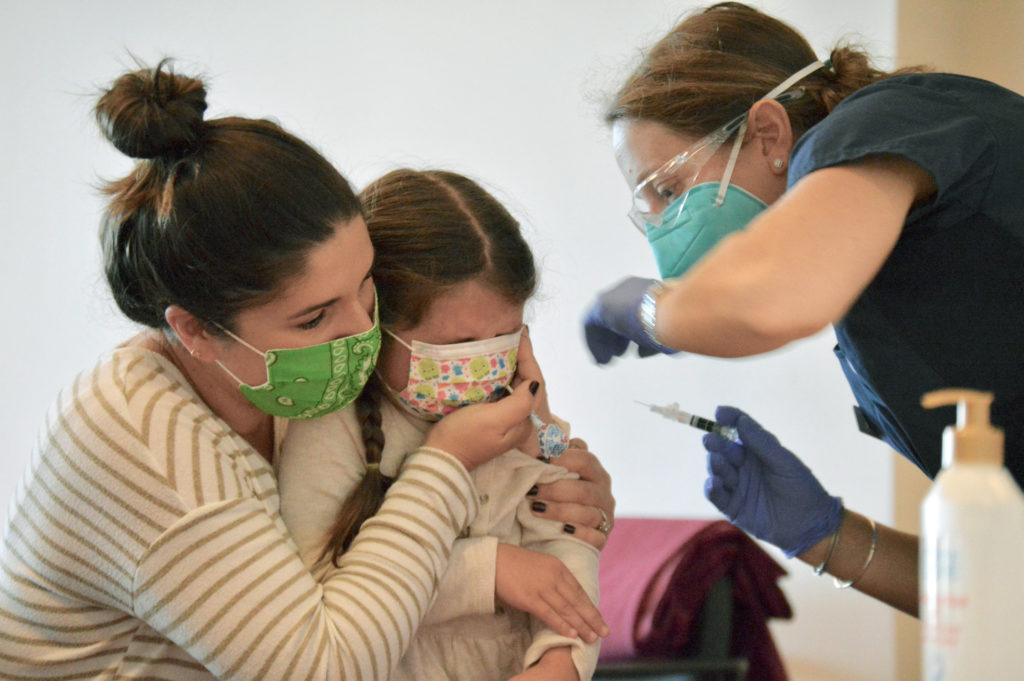 Coastline held a flu clinic for employees and their family members on Oct. 14. Stephanie Silva (left) comforts her daughter, Harper (center), as she receives the flu shot from Emily Cassista (right), a CVS pharmacy manager. With COVID-19 cases surging across America, health experts are urging the public to get the flu shot to prevent a “twindemic.”

The influenza season officially began in October, adding yet another element of danger to a year marked by a different respiratory illness, COVID-19. But it’s not too late to receive the flu shot if you have yet to do so.

This year, public health officials have tried creative workarounds to administer the flu vaccine while abiding by social distancing protocols put in place during the pandemic. Communities throughout the country have tried outdoor, “drive-through” clinics, where patients can simply dangle their arms from their car windows and receive the shot without having to enter a pharmacy.

By late October, the Town of Dartmouth and Walgreens had offered several of these clinics, where hundreds of people from around the South Coast were vaccinated in school parking lots.

“The ideal time to get a flu shot is the end of October,” said Dr. Christian Pope, a Dartmouth Board of Health-appointed advisor from Hawthorn Medical Associates. Pope was on-site during a drive-through clinic at the Dartmouth High School on Oct. 18.

“It takes a few weeks to mount an immune response, and we know the flu season peaks in January and February and lasts through May,” he said. “But it’s not too late. If November is your first opportunity to get a vaccination, it’s better late than never.”

Pope said that older adults are among those who need the vaccine the most. While each flu season will vary in terms of severity, the Centers for Disease Control and Prevention (CDC) notes that those age 65 and older typically bear the greatest burden. Older adults experience the majority of seasonal flu-related deaths and hospitalizations.

The annual seasonal flu vaccine is the best line of defense, and it has been shown to reduce the risk of complications associated with influenza. It’s still possible to get the flu even after being vaccinated. However, studies have shown that the vaccine can help lessen the severity of illness.

Pope noted that the flu vaccine will not only protect you, it will help health care professionals who have spent the past year battling the COVID-19 pandemic.

“If we can limit the health care burden with patients visiting hospitals, emergency departments and physicians’ offices with the flu, we could spend more time and energy – as well as spare more personal protective equipment in the hospital setting – dealing with potential COVID cases,” said Pope.

“We also have to think about the workforce in critical services,” said Chris Michaud, Dartmouth’s director of public health.

“Getting the flu shot can help preserve the workforce. We know that a lot of employers are struggling right now to keep their doors open and to maintain employees,” he said. “Every business that we go into is saying the same thing: we need more people.” 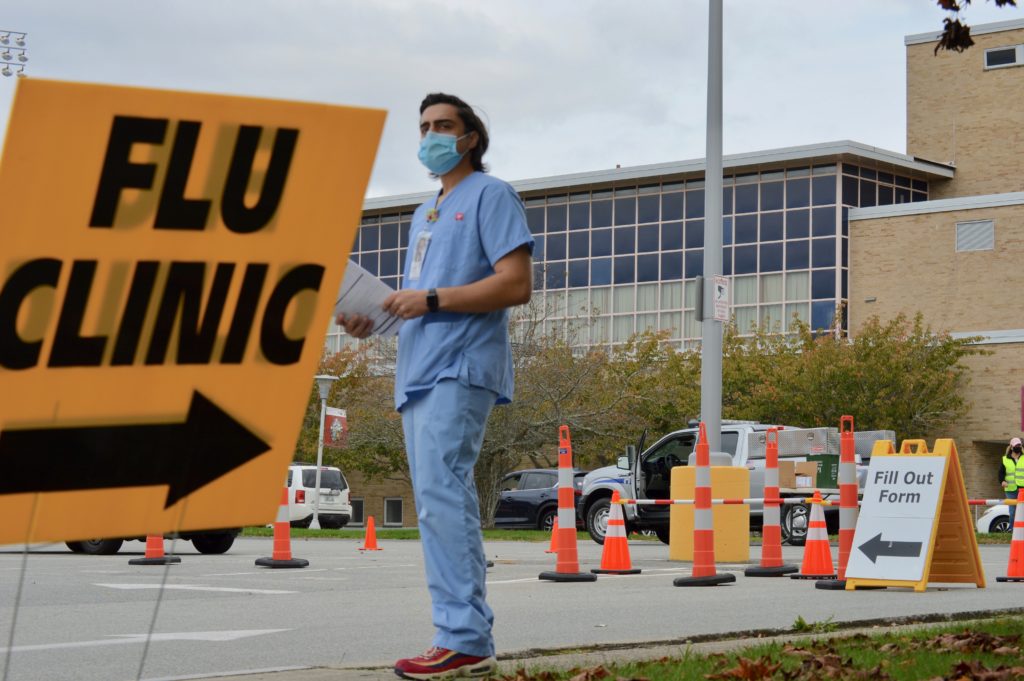 Jared Przybyszewski, a pharmacist with Walgreens, waits for cars to pull into Bishop Stang High School on Oct. 25. Dartmouth and Walgreens held several drive-through flu vaccine clinics this year to ensure the public could receive the flu shot safely during the pandemic.

Beyond drive-through clinics, local pharmacies are trying to streamline the flu vaccination process to ensure that customers do not need to linger inside public spaces. At CVS and Walgreens, customers can schedule an appointment online, completing any necessary paperwork ahead of time.

“That has made people a lot more comfortable, knowing that all they have to do is walk into the store, sit down, get the shot and then leave. They don’t have to talk to anybody or touch anything. There’s limited exposure,” said Emily Cassista, a pharmacist and pharmacy manager at the CVS on Kempton Street in New Bedford.

For those who do not have access to the internet, you can call to set up an appointment. There will be additional paperwork, but you are not obligated to fill out the forms inside the store.

“We’ve had people come to the drive-through to pick up the paperwork,” said Cassista.

Rachel Tetreault, the pharmacy manager at the Walgreens in South Dartmouth, said her store is willing to meet people outdoors.

“We’re doing lots of shots in the parking lot,” Tetreault said. She said they have always provided the flu shot in the parking lot for certain people, but the service has expanded this year. “Some people don’t want to come in. But any way that we can get you the shot, we’re going to get it to you.”

This year’s flu season began to concern public health experts not long after the COVID-19 crisis was first taking shape in America. Over the summer, ahead of the academic year, the Baker administration made the flu vaccine mandatory for all children 6 months of age or older to attend child care, pre-school, K-12 schools and colleges. To keep up with demand, the Baker administration ordered more vaccines than in a typical year.

Both pharmacists recommended that older adults receive a flu shot sooner than later, whether or not it’s a standard vaccine or the high-dose vaccine. They said another thing to consider is that it takes about two weeks for the flu shot to take effect and offer protection.

“I don’t think it’s worth delaying care to possibly run into the flu while you’re waiting for the high-dose vaccine,” she Cassista. “Just get the regular flu shot. It’s still going to help you.”

And for those who avoid the flu shot because they’re convinced it will make them sick?

“The flu shot’s not going to give you the flu,” said Tetreault. “For most people who say they get sick from the flu shot, it’s a coincidence with the cold season and the timing of the flu shot.”

“If something is preventable, prevent it,” she added.