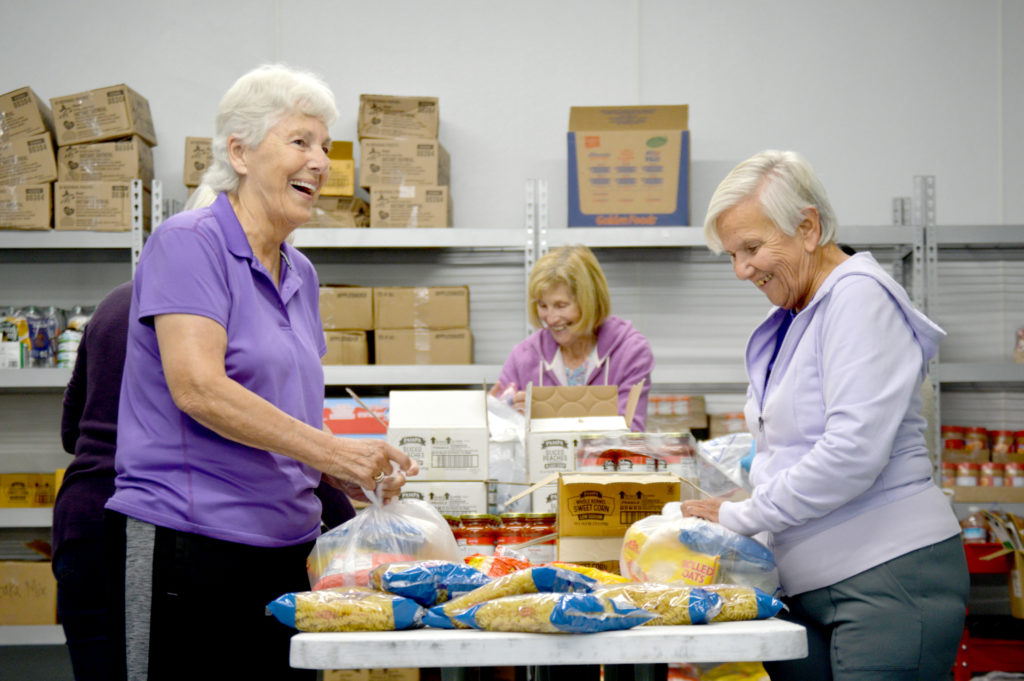 Dartmouth United Outreach and YMCA Southcoast’s Full Plate Project joined together this fall to distribute food at the Dartmouth YMCA on Tuesdays from 3 to 5 p.m.

Last year limits on gathering forced churches around the nation to rethink how they would deliver services and connect with their communities. At Smith Mills Congregation Church, a small church in Dartmouth off of Route 6, that meant shifting its focus to food relief.

The church’s empty halls became a food distribution site, and the volunteer-driven project became known as Dartmouth United Outreach. The group offered food to the public through a weekly drive-through system out of the church’s parking lot. More than a year later, this temporary relief effort found a more permanent home after Dartmouth United Outreach merged with the YMCA Southcoast’s Full Plate Project. Volunteers from both parties now distribute food from the Dartmouth YMCA’s parking lot on Tuesday evenings.

“Even though the pandemic is settling a little bit now, the need is still there and has always been there,” said Lisa Rahn, the YMCA Southcoast’s director of community outreach. “It’s infuriating that in a country with the resources we have, there are people who don’t know where their next meal is coming from.”

Nationally, the vast majority of Americans are food secure, meaning they have consistent and dependable access to enough food to support a healthy lifestyle. However, around 10.5 percent of U.S. households – or about 13.8 million households – are considered food insecure, according to the U.S. Department of Agriculture.

On Oct. 13, the Leduc Center for Civic Engagement at UMass Dartmouth, the Office of Senator Mark Montigny, and the Marion Institute co-hosted “Food Summit 2021,” an annual conference highlighting the state of food access in southeastern Massachusetts. This year’s event highlighted findings from the 2021 Food System Assessment Report, which was developed by the Marion Institute’s Southcoast Food Policy Council. The extensive report serves as an update to the previous edition, published in 2014, and a snapshot of the food system in Bristol, Norfolk and Plymouth counties during the height of the pandemic.

Liz Wiley, the Executive Director of the Marion Institute and the keynote speaker at the summit, described the report as a road map for priorities to address in this region. It incorporates results from a survey of South Coast residents conducted between July and October of last year, which showed that about 23 percent of households relied on a food pantry in the past 12 months.

When asked if, within the past 12 months, they were worried whether food would run out before getting money to buy more, 39 percent of respondents said that statement was either “often true” or “sometimes true.”

“New Bedford and Fall River are regions with the highest need centers, with medium household income half of what the state average is,” Wiley said during the live event.

Respondents listed a variety of expenses that directly compete with food access, primarily utilities, mortgage, and rent, with health care costs and transportation also a factor.

“The core of the problem continues to be disinvestment in the food system and trust in the market to manage the food system in a fair way so that everyone gets fed and producers are treated fairly,” said Winton Pitcoff, the director of the Massachusetts Food System Collaborative.

“Farmers aren’t making money to grow food for us, and people can’t afford to buy food,” he said.

The report noted that one avenue for assistance, SNAP (the Supplemental Nutrition Assistance Program), is underutilized in the state. According to the Department of Transition Assistance, as of December 2020, about 1.6 million individuals were eligible for SNAP in the state, yet only about 900,000 were enrolled.

That difference – the “SNAP Gap” – was a topic featured heavily at last year’s food summit, where Project Bread urged participation in federally funded programs, like SNAP and Meals on Wheels, in place of relying on food pantries.

Wendy Garf-Lipp, the executive director of United Neighbors of Fall River and guest panelist at this year’s summit, said her organization did not initially deal with food relief, but was moved to do so during the pandemic. As part of that work, she said she’s encountered parents who were eating on alternate days so that their kids could have a meal.

Back at the Dartmouth YMCA, one of the Y’s covered pavilions has been renovated to store vast amounts of food, which will be packaged and distributed at several regular community markets. Through a partnership with the Greater Boston Food Bank, the project will receive grant support for three years.

Rahn said that while food access was a problem before the pandemic, one major shift has taken place that could lead to a solution: more communication among local organizations.

“One of the best things that came out of the pandemic was that it made a lot of people look at how siloed agencies used to be. People are forming community partnerships now. We’re all recognizing how interdependent we are,” she said..

To learn more about the Marion Institute, visit marioninstitute.org.

Dartmouth United Outreach has moved its Grab & Go food pantry to the Dartmouth YMCA, 276 Gulf Road in Dartmouth, on Tuesday evenings from 4 to 6 p.m. Participants will be asked for a ZIP code and the number of people living in their household. No photo ID is required.