Most nonprofits rely on philanthropy or government funding to sustain their operations, but when Jim Stevens created Gifts to Give he was determined to do good sustainably and that included finding a way to create his own revenue.

Stevens gave a presentation recently on the Acushnet-based nonprofit, why he started it, and how it helps children and others in the region.

Stevens had been a “serial entrepreneur” for years, but this desire for social change pushed him to shift his attention to directly helping others, especially children. His early efforts – giving money and things away – were satisfying, he said, but didn’t provide the change he was hoping to see.

“It made me feel really good,” said Stevens, “but it didn’t change anything.” After a few years of observation and experimentation, working to understand how nonprofits succeed in helping others and where they fall short, Stevens started to plan his own nonprofit. His challenge was to figure out how to configure the organization so that it helps its target audience, in this case children living in poverty, while supporting social change and without taking funds from other issues.

That’s when an epiphany hit.

Technically, Hurricane Katrina hit first and Stevens, through his role with Boston-based Cradles to Crayons, was part of an effort to bring four truckloads of supplies to Baton Rouge, La. The experience taught him firsthand what it felt like to support thousands of children yet look around and see hundreds of thousands more still struggling.

Afterwards, he realized his goal wasn’t really giving goods to those in need, but instead building a generation of people who instinctively saw their role in the community and world as one where they take care of each other.

“That’s when I started to realize through this experience that it wasn’t about giving stuff away, it was about volunteers,” Stevens said. “I knew if I wanted to effect change, it had to be a generational understanding. It’s what I learned in Kindergarten, but also giving people a practical place to see it happen.”

Today, Gifts to Give is a nonprofit that takes in unwanted goods, cleans and repairs those it can, and provides an outlet for people to receive them. It operates 100 percent by volunteers – the adults (Stevens refers to them as the grandmas) who run the operation, and the youth, from three-years-old to college age, who clean and sort goods for pick-up and simultaneously learn the power of helping others. 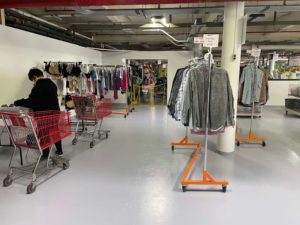 The youngest volunteers color and stamp wrapping paper, according to Stevens. Children begin filling orders early, he said, before they really understand how to do it. So Stevens has each successive age group check and redo orders.

“It’s not an efficient process, but we’re not selling efficiency. We’re selling a volunteer experience for a child,” he said.

“This year, the thrift store will pay the whole operating expense, so we have a nonprofit that has some impact and clearly can pay for itself,” he said, referring to the Saturday-only thrift store that sells adult clothing and home goods.

“Every dollar we make we’re putting towards the program,” he said. “99.5 percent of the money we make goes directly to the programs.”

Stevens is able to do that because of his adult volunteer team – the older adults who run the operation and sometimes Stevens himself.

Gifts to Give is seeking additional talented grandmas and grandpas (grandchildren not required) to expand its volunteer team. For anyone interested who has a few morning hours free to share, learn more at https://www.giftstogive. org/how-to-get-involved/volunteer/ or call 508-717-8715.