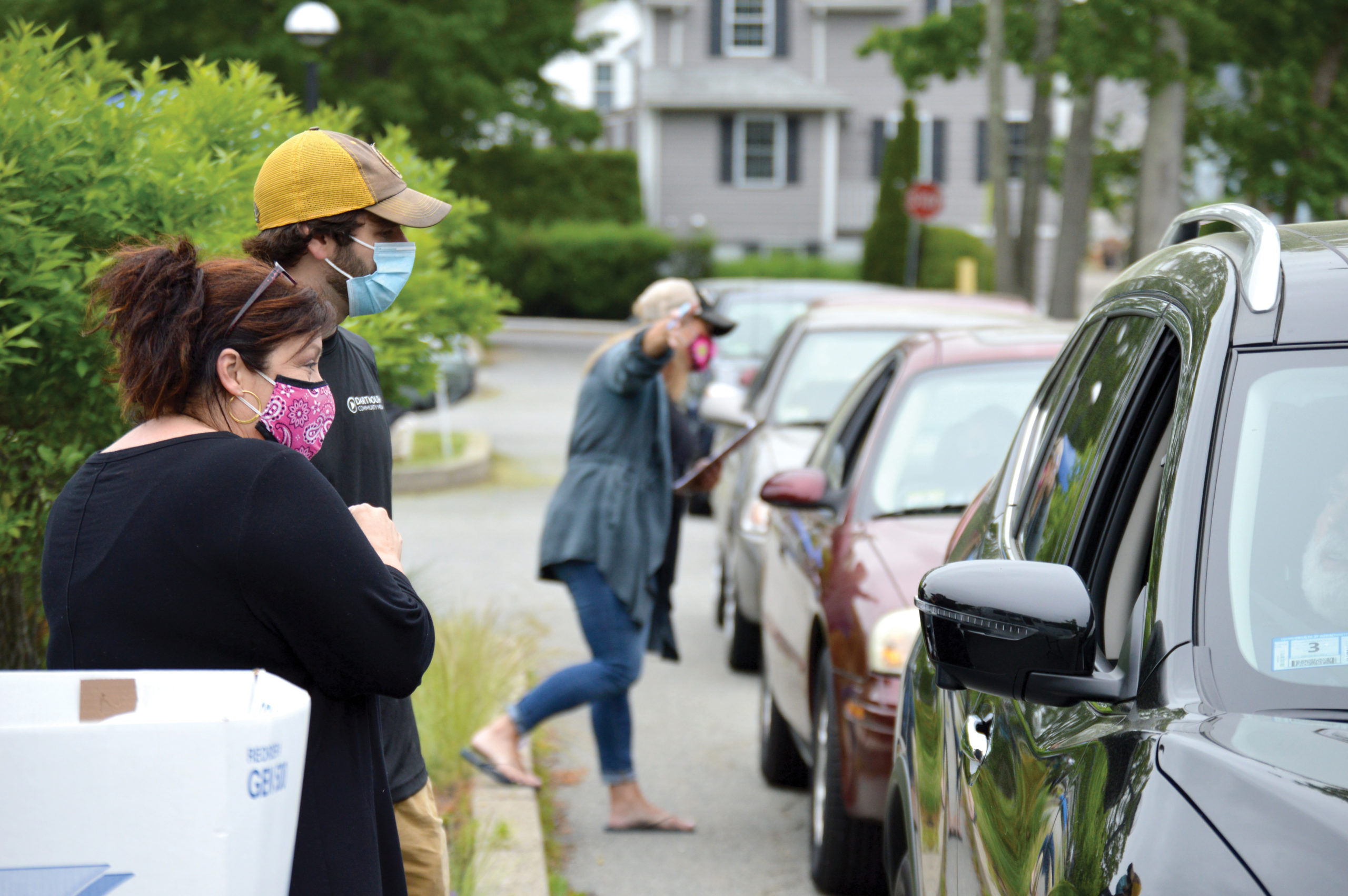 Cars lined up in the Dartmouth Council on Aging for the second Grab ‘n’ Go lunch event on June 11. The event will return in July.

This article originally appeared in the July 2020 edition of Senior Scope. Article and photo by Seth Thomas.

While the local councils on aging continue to restrict visitors, the centers are still finding ways to stay connected with patrons. On June 11, a long line of cars snaked its way out of the Dartmouth Council on Aging parking lot – all the way to the traffic light at the corner of Rogers and Dartmouth Streets.

The center was hosting a grab and go lunch, the second since the pandemic started, which gave patrons of the COA a chance to see a friendly face, even if those friendly faces were concealed behind face masks.

Participants remained in their cars as staffers from the COA and Dartmouth Community Media (DCTV) placed to-go lunches and boxes of produce in participants’ cars as they drove through the parking lot.

“We want everyone to know that we’re still here and still connected,” said Nancy Miller, the center’s activity director. “A lot of people have said that they didn’t realize how much this place meant to them. It was a big part of their day.”

The first event, which was held in mid-May, drew a large crowd, she said. For the second round, they promoted the event on the center’s newly updated Facebook page. Those who signed up received a goodie bag with clam cakes and chowder, which were donated from Cape Quality Seafood and Blount Fine Foods, along with some other takeaways.

The first grab and go lunch was such a big hit that it attracted the attention of local musicians. During the event in June, a group of ukulele players performed in the parking lot as patrons waited in line.

A group of musicians played ukuleles and sang for those who were waiting in their cars in line.

“We’ve all been talking about wanted to do something during quarantine, but we couldn’t figure out how to do it,” said musician Jen Wallace, as five other ukulelists performed a rendition of The Drifters’ 1964 hit “Under the Boardwalk.” Wallace did concede that singing with a mask on wasn’t ideal.

“We’ve stepped up our outreach a notch,” said Amy DiPietro, the Dartmouth COA Director. “We’ve been assisting Coastline with the Meals on Wheels program, which has been great because it’s enabled us to get out into the community more. We’re meeting different people and catching some of their needs.”

Since the early days of the pandemic, the COA has been working to transition to a virtual environment. DCTV has recorded several regular classes for the center and is airing the shows on their TV station and website. Some COA services, like providing essential transportation, never stopped during the pandemic.

“I don’t know what the future holds,” said DiPietro. “But we have to think outside the box and reach the people who are still socially isolated.”