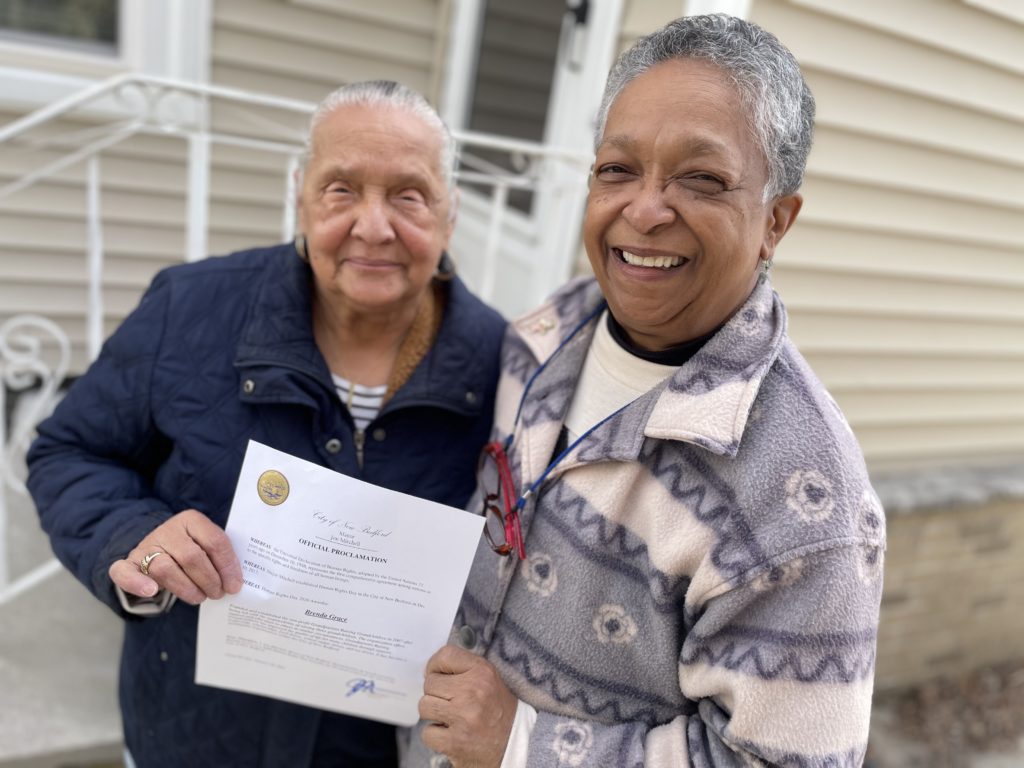 The New Bedford-based nonprofit Grandparents Raising Grandchildren, Inc. was honored for its ongoing work during the pandemic on Human Rights Day 2020. President and founder of GRG Brenda Grace (left) and treasurer Renay Ribeiro (right) stand with an official proclamation from the Mayor of New Bedford.

This article originally appeared in the April 2021 edition of Senior Scope. Article and photos by Seth Thomas.

New Bedford resident Brenda Grace didn’t set out to start a nonprofit, but, nearly 15 years ago when she found herself responsible for her three grandchildren, she quickly realized she had no idea where to go for help. So, back in 2007 she led the charge, forming Grandparents Raising Grandchildren, Inc. to help grandparents navigate the emotional and logistical challenges of raising their grandchildren.

The organization previously hosted a support group at New Bedford City Hall until the pandemic put an end to public gatherings. Grace moved the meetings to her backyard during the summer months, but those, too, were canceled as winter weather set in. The organization pressed on, mostly through phone calls or through mail.

And for those grandparents who need support, Grandparents Raising Grandchildren is still just a phone call away.

For her ongoing effort – for providing resources and an open ear to grandparents – Grace received an official proclamation from the Mayor of New Bedford as part of Human Rights Day, which is held on Dec. 10. While there wasn’t a formal ceremony in December, Grace received the award this year for improving “the quality of life for many children through support, leadership [and] scholarships.”

Renay Ribeiro, who serves as the nonprofit’s treasurer, first came to the group when she found herself suddenly responsible for her two granddaughters.

“At the time, I was at a loss,” Ribeiro said. “It’s a challenge, especially when your income is just enough to take care of you. Now all of a sudden you’re inheriting your grandkids.”

Ribeiro was in a crisis, but was able to ask questions and find the connections she needed to quickly react to her situation.

“That’s the kind of guidance we give when these emergencies pop up. And I’m a living example,” said Ribeiro. “We can find avenues for them, whether they need a lawyer, a day care – we know who they can talk to.”

Perhaps most importantly, she said the organization can help grandparents feel like they are not alone.

“Whatever they say in that group, stays in that group,” Grace said. “We’re all in the same situation. Let’s all help each other out.”

About 46 percent of grandparents raise their grandchildren for at least five years, and 56 percent are in the labor force, according to data from the U.S. Census Bureau. Nearly twenty percent live in poverty. Grandparents do not have an automatic legal relationship with their grandchildren, so unlike parents, they may be unable to access support and services.

The pandemic added more hurdles to an already challenging situation. Older adults have a higher risk for severe illness from COVID-19, are less likely to have access to a high-speed internet connection and may not have the computer skills to assist with remote learning.

Grace said on top of the general expense of raising grandchildren, the cost of living keeps rising, which presents other challenges during lockdown.

“With this virus going around, half of them can’t even afford this,” she said, gesturing to a bottle of hand sanitizer.

In addition to hosting meetings, Grandparents Raising Grandchildren, Inc. offers support throughout the year through toy drives, distributing school supplies and giving away turkeys during the holiday season. The group also maintains a scholarship program, which awards local grandchildren with money for college. The funds come from donations from the community. Though the pandemic ended larger gatherings, the group hopes to be back in the community soon, tabling at events and holding in-person events.

Grace, who is 76, works full-time because, she said, Social Security checks will not cover the cost of living. But the sheer amount of work that’s involved with raising a child melts away when Grace talks about her 14-year-old grandson.

She said he’s a “wonderful kid” as she flips through her cell phone, sorting through pictures of him hoisting large boxes of food that he helped distribute to the community during the pandemic.

“I know it’s aggravating. It’s frustrating. It’s depressing,” said Grace. “But look at what you accomplished. You can see the love in those kids.”