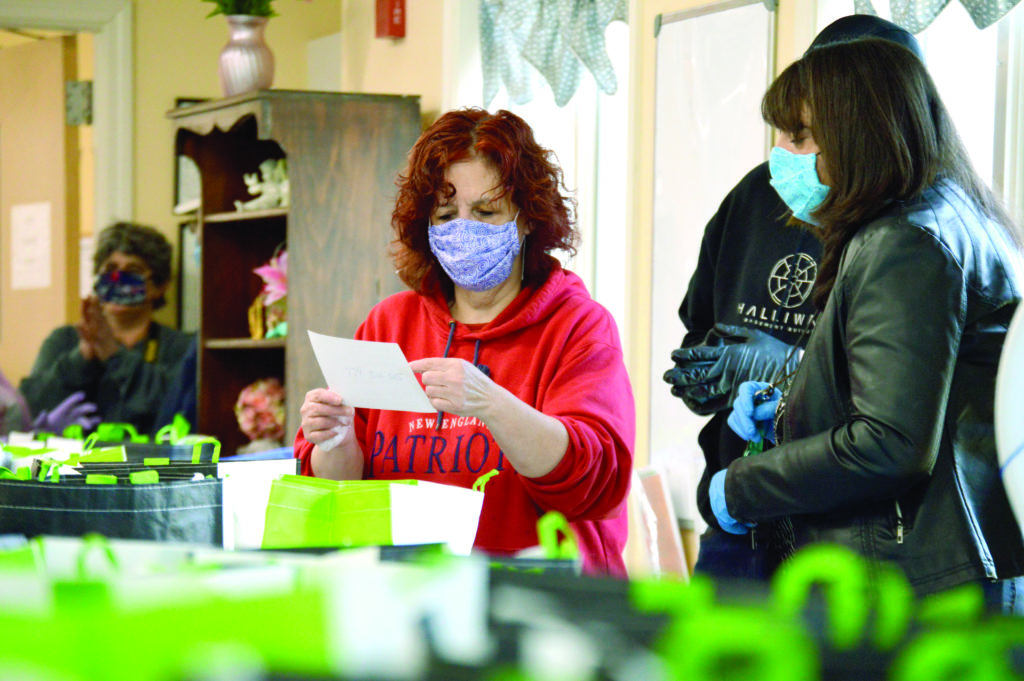 Fairhaven COA Director Anne Silvia (center) stands in front of dozens of bagged lunches, which were delivered to about 120 Fairhaven residents on Easter Sunday.

Social distancing, the public’s primary weapon in the fight against COVID-19, resulted in countless cancellations. Any gathering of more than 10 people had to viewed as a potential pathway for disease to spread. Everything from New Bedford’s Portuguese Feast, Germany’s Oktoberfest, Spain’s “running of the bulls” and even the 2020 Summer Olympics were all scrapped to avoid person-to-person transmission.

And some holiday celebrations carried on in the South Coast, albeit with some major modifications.

As Holy Week approached, it became clear that churches would not be prepared to open in time for the spring celebration, but Father David Lupo of St. Mary’s Church in Fairhaven found a way to bring his congregation together. On Palm Sunday, Lupo donned a face mask and gloves and handed out disinfected palm leaves through a drive-through system in front of the church.

To ensure that parishioners could join together to celebrate Easter, the church began streaming services over social media.

“It was not quite the same,” said Lupo regarding this year’s Easter Sunday service. “But after several weeks away, they were so happy to see the inside of the church again on Facebook. They yearn to be back and pray for things to go back to normal.”

The church continued streaming Sunday services thereafter. And although the tithe plate may be gone, Lupo said parishioners have left envelopes in the church’s mailbox to say thanks for the Facebook masses.

Anne Silvia, Director at the Fairhaven Council on Aging, typically brings together a large crowd on Easter for a group meal. This year, however, she was able to bring the meal to the public.

In the lead-up to the holiday, the COA was approached by an anonymous donor who wished to purchase 100 meals from Max’s Soda Bar. The thought was that, even if people couldn’t gather for a meal at the senior center, they could at least have a meal delivered to their door. Silvia said she reached out to the individuals who usually attend the Easter celebration and promoted the event on Facebook.

“The phone did not stop ringing for three days,” said Sylvia, who prepared 20 extra meals to accommodate demand.

On Easter Sunday, about a dozen volunteers delivered the meals to nearly 120 Fairhaven residents. Silvia said that between Easter, regular meal delivery, and other special projects, “there’s a lot of good people who have stepped up to volunteer.”

Some holiday traditions pressed on despite a brief delay. For three decades, the Rochester Council on Aging has celebrated Arbor Day with Rochester Memorial School by gifting students with trees. A little over a month after Arbor Day, Lorraine Thompson, Outreach Coordinator at the COA, and longtime volunteer, Jill Bodeau, delivered about 80 Blue Spruce trees to the school.

Rochester COA Director Cheryl Randall-Mach said the trees, which are typically delivered in-person to the students, had to be distributed this year with social distancing protocols in mind.

“We certainly missed the stories and closeness of past distributions,” Randall-Mach wrote. She said that one school staff member reported that their tree, received many years ago, was still growing in their yard.

“While this pandemic has impacted us all in many ways,” she said, “it’s inspiring to know that this special tradition was able to continue, for the beauty and enjoyment of all Rochester residents, for generations to come.”