Homecare assistance is in growing demand even as a shortage of home health aides, homemaking, personal care attendants, and similar positions has grown during the pandemic and continues today. The two conditions have collided with the greatest impact on older adults who need these services to remain in their homes. 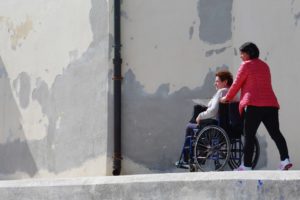 Speaking in July, Nobre-Hilton said there are between 40 and 60 people on the list for services, with many of them seeking weekend help.

“Until the pandemic, it was rare for us to have a waiting list of this size. It’s always difficult to get weekends, but some people just can’t get care now,” she said, adding that those who need Spanish and Portuguese-speakers are also finding longer wait times because there are fewer aides with these language skills.

“We have referrals coming in and we aren’t able to fill them,” she said.

The shortage reached near-crisis levels during the pandemic when a variety of factors came together to exacerbate an already difficult situation, say those connected to the problem. Many older adults were feeling vulnerable due to the COVID-19 virus and unwilling to allow people into their homes.

Workers too had their concerns about infecting their families. Some were unwilling to be vaccinated even with employer mandates to do so.

“We do our best every day, especially in this shortage,” he said. “It changes. Caregivers really have control of how they work, when they work, and how long they work. We don’t hold anyone to a specific schedule.”

Attentive is putting energy into continuous hiring, according to Arpa, and better retention strategies in its attempt to fill all care requests.

Arpa and other homecare providers spoken to for this article acknowledged the worker shortage and the impact it is having on people, both those employed to give care and those in need of it. Most said it’s better now than it was during the pandemic, but problems still exist.

One of the biggest problems to overcome is the current pay rates for home care positions, according to Coastline CEO Justin Lees.
“We’re doing everything we can to get the services in place. But it’s been hard to find workers,” he said.

The job isn’t easy, includes traveling from home to home with many not paid for their time while on the road, and requires heavy manual labor while working with people.

“It’s difficult work,” said Nobre-Hilton. “You physically have to pick people up, bathe them, and dress them. It’s really difficult.”

The strain is everywhere but the ones who may feel it most are the older adults, especially those with chronic illnesses, who have no solutions when they cannot get care. These are individuals who need regular medical care, often daily, but cannot access services in the home. Without options, they often end up in hospitals.

“In the past…if someone has little or no informal support or if a worker calls out, there’s COVID, or it’s not safe to be at home, we have to call and send (the person) to the emergency room,” said Nobre-Hilton.

For the older adult that’s traumatic. It’s also difficult for the healthcare system which finds itself with people who are staying long-term in the ER.

The waiting rooms back up and hallways fill with patients, according to Jacqueline Somerville, Southcoast Health’s chief nursing officer, describing the strain of having patients who stay more than 20 days. The hospital system hit 80 long-term stays recently, but that number was at 40 at the time of this conversation, according to Christine Cernak, executive director, Integrated Care Management at Southcoast Health.

“It also creates a strain on our internal resources,” Somerville said. “Oftentimes these patients may not be medically complex but their need for care…is enormous.”

The closing of some agencies including skilled nursing and nursing homes has made the problem worse, according to Somerville.

“They left us in this conundrum of not being able to get a nursing home bed and then the shortage of home health aides and personal care attendants is critical,” she said.

When no alternatives exist, it’s the hospital who works with individuals to go through the lengthy process of finding long-term care placement for them, sometimes taking up to a year to do that, said Cernak.

In addition to increasing pay rates, Somerville said these caregiver roles also need to be recognized as professional positions. “How do we create a professional practice environment and how do we communicate the message to them that they are valuable members of the team,” she said, noting that Southcoast Health has had some success working with Bristol Community College to help employees who want to become certified nurses’ aides.

Solutions like these exist, including a temporary boost to pay for homecare workers that is happening now through the American Rescue Plan Act. But more is needed, say those involved.

It doesn’t address the core issue, according to Nobre-Hilton, and for those who are on federal benefits, the additional funds can work against them, causing them to lose some of their benefits.