Hope and help on the menu for Overdose Awareness Day 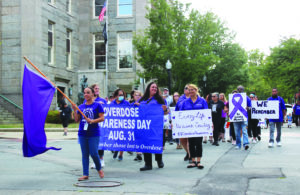 Emotions were raw in the city Aug. 31 as people came together to remember and honor loved ones who died from an overdose.

On the steps of City Hall, people of all ages held signs with photos of deceased family members or friends as officials and legislators addressed the issue of addiction and spoke about the need for more solutions. The event was held as part of the International Overdose Awareness Day, a globally-recognized day each year to raise awareness of overdoses, reduce the stigma of drug-related deaths, and acknowledge the grief felt by families and friends.

Mayor Jon Mitchell spoke to the approximately 75 people who gathered at City Hall for the evening, noting that their presence that evening was itself a testament to hope. He suggested that the stigma of the hopeless drug addict has changed and that people struggling with substance use are our family members, our friends, and our work colleagues.

“We think of the caricature, but it isn’t that,” he said. “It’s people going about their lives in unremarkable ways.”

Forty-three people in the city lost their lives to an overdose in 2021, according to New Bedford Police Chief Paul Oliveira.

“We need to know, and we should know that number,” he told participants. “They are our friends, our family members, our comrades, and co-workers. They were good people with a horrible problem, swept up in a vicious cycle that is difficult to escape once it has been entered. Tonight, we remember these people as we promise to continue our struggle in their name.”

“That is the number of people who have overdosed and survived,” he said. “The 517 candles you see (on City Hall steps) represent the individuals who were rescued and given a second chance, another opportunity to turn things around.”

“This number represents many positive things. It represents that first responder who arrives on scene to administer Narcan, it represents that good Samaritan who emerges from the crowd to perform CPR, that citizen who sees an individual in distress and does not turn away, but instead calls for help,” he continued.

“517 is a number that represents hope. It is a reminder that in the darkest of times, the best of us emerges.” 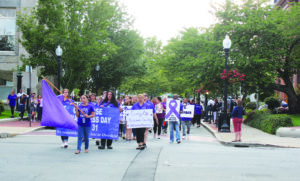 Bristol County District Attorney Thomas Quinn noted that the county’s LEAD program – the Law Enforcement Assisted Diversion program – works to divert those charged with lower-level crimes related to addiction to treatment alternatives. More than 128 people have been successfully diverted to treatment since the program’s start, he said.

This year’s local theme for the evening focused on the experience of siblings as they watch a sister or brother go through addiction with poignant personal testimonies from several siblings. “(Siblings) feel guilty. They don’t know what to do. They don’t know how to help. They’re enabling (the substance user) but at the same time, they’re helping them,” said Connie Rocha-Mimoso, Director of Community Health for Seven Hills Behavioral Health, an event organizer.

While the focus of the evening was mostly on young people, older adults are not immune from the problem, said area professionals.

“This hits any age,” said Rocha-Mimoso, adding that older adults experience substance use problems but they may be more affected by stigma and not as quick to seek treatment or help.

“I see a lot (of older adults). A lot of stigma and people who are living in closets. A lot of mental health (problems),” she said. “Seeing the increase in that population is alarming because they’re not coming out to find help. “

Lizette David, of House of Hope New Bedford, said she also sees older adults who are struggling with addiction and looking for help, but not nearly as many as younger people.

David believes there are barriers to getting treatment that older adults face including the lack of transportation to get to services. She also sees reservations among older adults to seek out treatment.

Rocha-Mimoso encouraged all older adults to find help. It doesn’t have to be formal treatment, she said, sometimes you just need someone to talk to who will listen and care.

“Don’t be afraid to reach out to anyone,” she said. “There’s always someone who will open up the door with a smile for you.”

In his comments, Rep. Chris Hendricks agreed, emphasizing his own recipe for hope – the need to connect and reconnect with people who are struggling with addiction.

“Send that text today…and let them know simply that you love them,” he said.