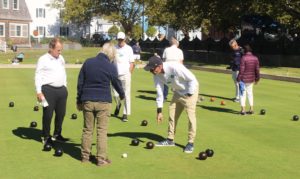 On a warm September Saturday, New Bedford native Emile Lambalot showed that despite not having bowled in New Bedford for decades, the 94-year-old still had good form on the bowling green.

Lambalot bowled his nearly threepound ball down the rink on the newly revived lawns at Hazelwood Park as teams from New Jersey, Connecticut, New York and New Bedford, readied for a divisional meet to be held there that day.

Lambalot and his brothers had been part of a thriving lawn bowling environment in New Bedford in the 1950s at a time when both Hazelwood and Brooklawn parks had lawns and people young and old joined teams to compete against each other regularly.

The sport had become popular from the English families working in the textile mills, including Lambalot’s brother-in-law who introduced him to the game. It remained popular into the 1970s when it began to die out, mainly because of a lack of new players, according to several people who remembered the sport in its glory days.

On this particular Saturday, the city’s revived bowling greens were in full action as teams from the Northeast Bowls Division converged to compete there, many of them dressed in traditional white for the games.

Teams lined up at both ends of a rink, or lane, down which the biased bowling ball (not perfectly round) was thrown in an attempt to get closest to the jack, or smaller ball at the other end. All six lanes of the lawn were being used with teams of three or four players each playing at the same time.

Most of those playing on Sept. 24 were 50 years old or older, but several younger adults and even a few children were also present, enjoying the sunny day. The age range of those able to bowl is one of the reasons the city was so thrilled to bring the bowling greens back, according to Mary Rapoza, director of Parks Recreation and Beaches for the city. 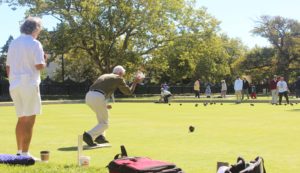 “From the city’s perspective, literally anyone from eight-years -old to 82-years-old can play. Folks in wheelchairs can play,” she said. “Everybody’s really excited about these greens.”

The restoration project to bring the lawns back cost $583,000, according to the city, in what was a public-private funding venture that included $253,000 in city funding. The project got started in September 2020 with the lawns officially opening in July.

Lambalot, who was looking forward to his 95th birthday just a few days away, said he was definitely young enough to still play the sport and that he was happy to be back on the green. Although lawn bowling looks leisurely, the former competitor said the intent was always to win.

Lambalot met JoAnn Tschaen, former Trips for Kids executive director, Community Boating Center founder, and one of the organizers working to revive the lawns at Hazelwood Park, before the project was completed. He shared his memories of playing the sport with her and told her when he stopped playing he stored his lawn balls in the park building. He was insistent they were still in there, according to Ann Marie Briand, Lambalot’s daughter.

Tschaen was happy to take a look and after a thorough search was able to find one of the three balls that Lambalot had order from Scotland decades earlier. The ball was identifiable,not just by its style, but because it had been stamped with Lambalot’s initials, EGL.

Although the Hazelwood Park greens had become unusable over the years, a push to revive them began about nine years ago, according to Tschaen.

The city got behind the project, she said, as did the Friends of Hazelwood Park which formed about three years ago.

The new lawns have been getting very positive reviews from out-of-state teams who have visited, according to Rapoza. The addition of another location is especially welcome because not many areas have lawns anymore. The next closest green to New Bedford is in Hartford, Conn.  The lawn can also be used for croquet.

The project has been a success locally too with people of all ages interested in trying out the game. Many of the area seniors have fond memories of playing the sport, Tschaen said.

Anyone who would like to try bowling can still get in a game or two before winter. Everyone is welcome, including newcomers, from 6-8 p.m. on Friday evenings through November when the Friends of Hazelwood Park holds an open invitation for bowling. After that, the lawns will be closed and reopened in April, Rapoza said.

“People of all ages are welcome to find out more, learn how to play, or come and play seriously or just for fun,” she said.