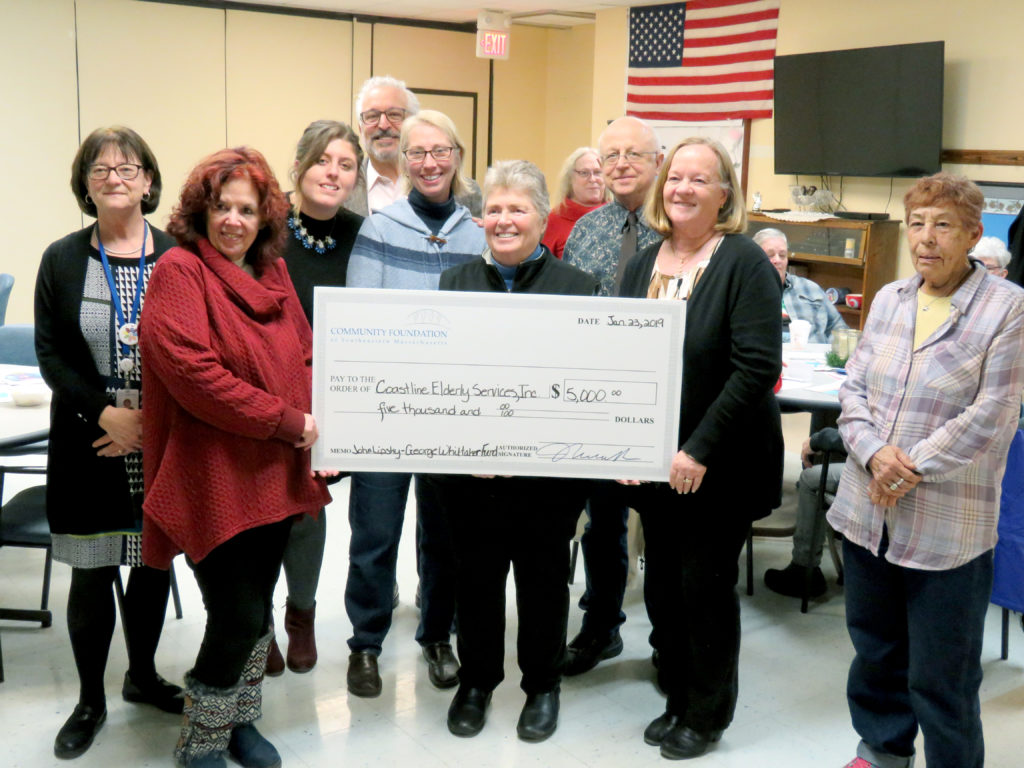 This article originally appeared in the February 2019 edition of Senior Scope. Article and photos by Seth Thomas.

On Jan. 23, the Community Foundation of Southeastern Massachusetts – John Lipsky-George Whittaker Fund awarded a check to Coastline Elderly Services in support of the LGBT Supper Club, a monthly social group hosted at the Fairhaven Council on Aging. The grant will help fund operations at the club, which, for the past four years, has brought together locals who identify as lesbian, gay, bisexual or transgender.

Anne Silvia, the director of the Fairhaven Council on Aging, said the supper club formed shortly after an in-service program at Coastline regarding LGBT elders. Part of the in-service included a viewing of the 2010 documentary film “Gen Silent,” which chronicled the lives of several LGBT individuals living in the Boston area as they navigated the health care system.

The film explored the ways in which health care providers often overlook the needs of this particular group and the ways in which homophobia can play a part in disparate health outcomes. The film suggests that many LGBT seniors feel compelled to head back into the closet as they enter assisted living to avoid mistreatment.

Being a relatively small slice of the population means their needs can go unaddressed, especially in medical settings. According to “Understanding Issues Facing LGBT Older Adults,” a report published by The Movement Advancement Project (MAP) and Services and Advocacy for GLBT Elders (SAGE) in 2016, it’s estimated “there are approximately 2.7 million LGBT adults aged 50 and older in the United States, 1.1 million of whom are 65 and older.”

Moreover, the report notes that a “lack of funding for LGBT-specific aging resources mean that LGBT elders are susceptible to isolation,” which has been associated with a greater risk of heart disease, depression and anxiety.

“As part of the in-service, they showed on a map where there were 60-and-over LGBT cafés,” said Silvia. “There were a lot of them in the Boston area, but nothing in the South Coast.” 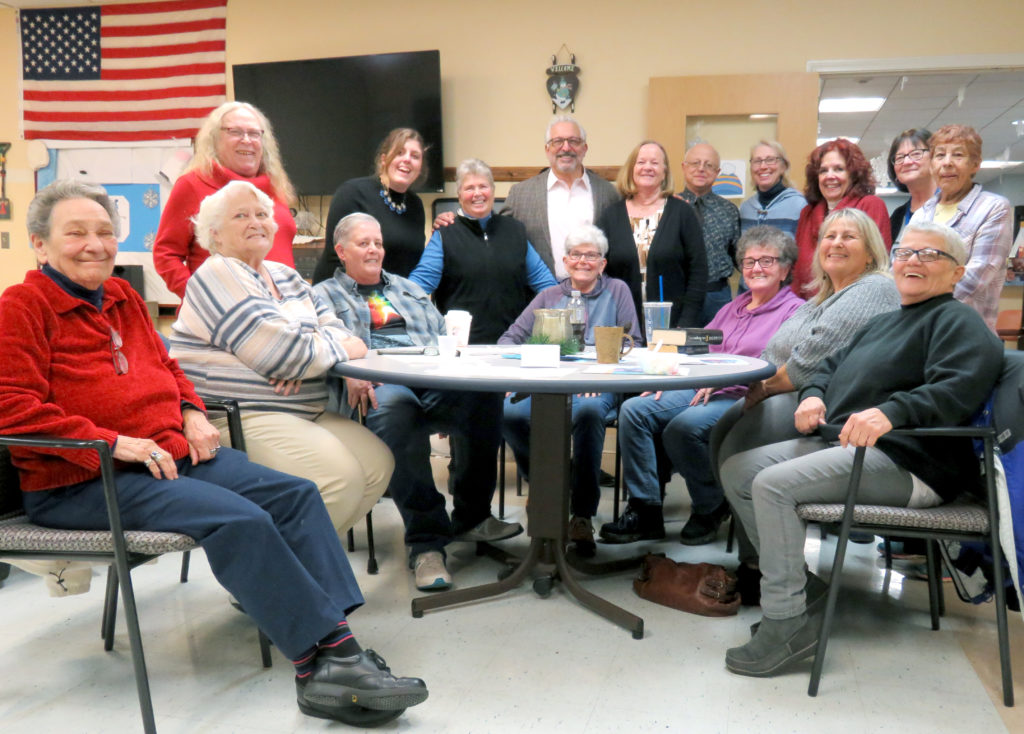 The LGBT Supper Club started thereafter with a grant from the Community Foundation of Southeastern Massachusetts – John Lipsky-George Whittaker Fund. The group, which meets on the fourth Wednesday of the month, brings together local members of the LGBT community for dinner, guest speakers and occasional trips.

Chris Wood, who has been with the group since its inception, said she’s part of a 10-year study tracking the well-being of LGBT elders. By her estimation, depression and isolation are some of the biggest issues facing this population.

She also described the supper club as a blessing. Through the group, she met two friends who would go on to become her landlords. Following a major foot surgery about a year ago, the two helped her stay active.

“I wasn’t stuck in my house having to rely on a service, like a visiting nurse,” said Wood. “I got to go out. They took me to social things. They took me to church. If you don’t have connections like that, you become even more socially isolated. It can become an issue.”

“When I first moved here, it was very overwhelming to me, having come from a world of friendships,” said Connie Mayer, who also frequents the supper club. She said for those who rely on a chosen family — relying on friends rather than blood relatives for assistance, care and connection — it can feel isolating when others minimize the value of friendships.

“Elder orphan” is a relatively new term to describe those aging without a spouse or children. A peer-reviewed study from 2016 found that about 22 percent of older adults in the U.S. either fall into this category or are at risk of doing so.

According to the MAP/SAGE report, LGBT elders are “less likely to have informal support networks comprised of children and other family members, the networks that many non-LGBT adults rely on as they age.”

Mayer has found many in the area rely on their own families for support and connection, with friendships being a lesser priority.

“It took me years before I realized that friendship came real far down on the list,” said Mayer. “That’s different when you come from a group of people that are without family.” For those looking for resources around the area – and for those who may not necessarily feel comfortable attending a supper club – the South Coast LGBTQ Network is a local nonprofit aiming to bring people together of all ages.

“We want to be the central organizational hub for the LGBT community because people need help, but there’s nowhere to go. We want to gather more resources,” said Rebecca McCullough, President of South Coast LGBTQ Network.

McCullough noted another way that local LGBT individuals can get together: volunteering. Anyone can register as a volunteer on the group’s official webpage.
“Even people in their thirties and forties wonder ‘Where do we go? What do we do if we don’t want to go to a bar?’” said McCullough.

To learn more about the LGBT Supper Club, contact the Fairhaven Council on Aging at 508-979-4029.

Contact the LGBT National Senior Hotline, which provides peer-support, information and other resources at 1-888-234-7243.

If you are an LGBT senior living in a long-term assisted living facility and feel your caregivers are treating you unfairly, call Coastline at 508-999-6400.