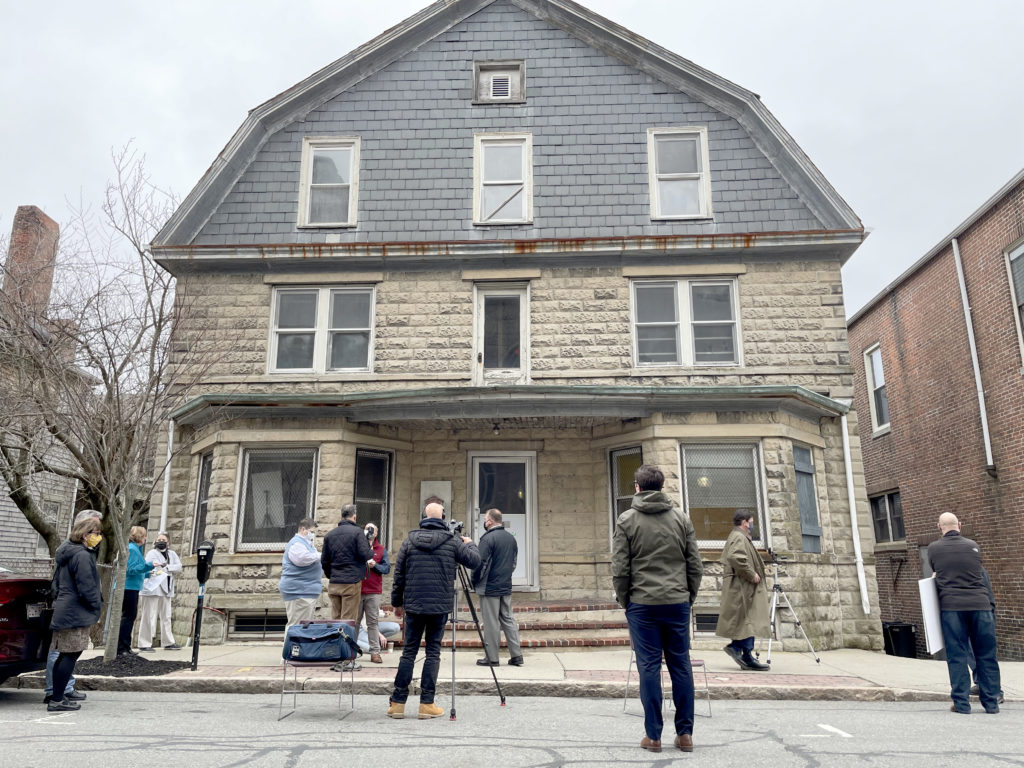 A crowd starts to gather before the opening ceremony of the upcoming South Coast LGBTQ+ Network’s community center in New Bedford. Once completed in late 2022, the center will be a central hub for programs and services for LGBTQ people of every age.

This article originally appeared in the June 2021 edition of Senior Scope. Article and photos by Seth Thomas.

The South Coast LGBTQ+ Network hosted a ceremony on April 1 in celebration of its upcoming community center, a central hub for the New Bedford-based nonprofit to provide programs and services to people across the LGBTQ spectrum, including older adults.

Early last year, the Network purchased the three-story building at 60 Eighth Street for $15,000 from the City of New Bedford and has since partnered with the Waterfront Historic Area League (WHALE) and JMBA+Architects to renovate the structure within historical standards. The center is expected to open in late 2022.

Renovations will begin this summer, and fundraising will continue. Thus far, the Network has raised about 40 percent of its goal of $1 million.

“Social change does take time, but providing local resources, programs and services to LGBTQ individuals through a central hub makes programs more accessible,” said Rebecca McCullough, vice president of the Network, during the ceremony. “The Network has started something big.”

As the organization looks toward the future, Andy Pollock, president of the Network, said the group will be especially focused on providing services to three subpopulations within the broader LGBTQ community: youths, transgender people and older adults.

Through the Network’s own needs assessment survey and through anecdotes from community members over the years, the organization realized that older LGBTQ people face specific challenges – and that support services for this particular population are often lacking.

“End-of-life care is difficult for everybody, not just LGBTQ elders,” said Kerry Zeida, the Network’s marketing director. “But, because of all the institutional hatred and homophobia, the research indicates that people go back into the closet at the end of their lives because of fear of discrimination, not being able to get appropriate health care and being rejected from assisted living facilities.”

Zeida said the Network intends to form a committee specifically looking at the needs of older LGBTQ adults. They will also build unique programs at the future community center that either don’t exist elsewhere or could serve as extensions of other programs that are already working well.

For years, one such group has been meeting regularly at the Fairhaven Council on Aging. Anne Silvia, Director of the Fairhaven COA, said the idea for the LGBT Supper Club initially formed after attending an in-service for Coastline employees. At the presentation, which was provided by Fenway Health, a Boston-based research and advocacy organization, Silvia said a map was displayed highlighting the locations of cafés for LGBT older adults in Massachusetts.

“There were maybe ten or twelve in the Boston area,” Silvia said. “The next closest place was Orleans. And there was nothing on the South Coast.”

Since launching about six years ago, the supper club has attracted as many as 40 people, with 20 core members attending over the years, many of whom are living outside the region. Silvia said the beauty of the Fairhaven supper club has been watching friendships form over the years. She said people would connect outside of the COA, meeting up for movies or bowling.

“It also proved that something like the LGBT supper club was missing down here,” said Silvia. 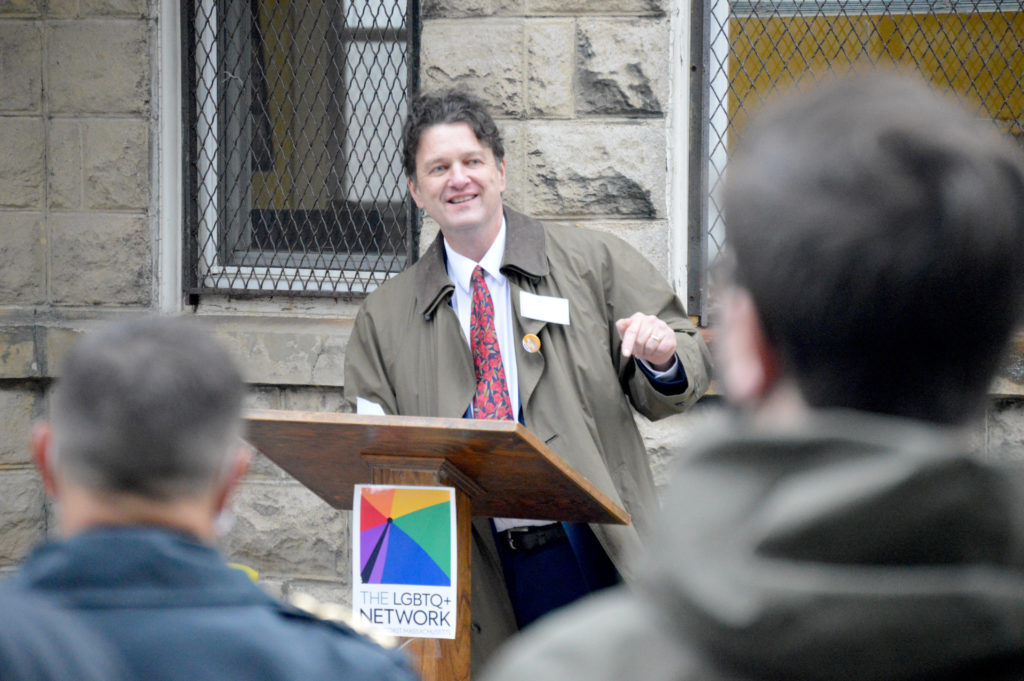 Andy Pollock, president of the South Coast LGBTQ+ Network, speaks during the ground breaking ceremony. The Network plans to open the center in late 2022.

The community center, which has a kitchen, rooms for activities and meetings, and designated space to create art, will give people of any age a place to congregate and meet like-minded individuals.

“It used to be that gay bars were the only community center that was available, and they weren’t terribly healthy,” said Pollock.

Moreover, by including older people on committees and getting them involved in events and activities, he hopes older generations can lend their talent and insight to younger people.

“I think it’s important to create a space where history, experience and wisdom are appreciated and can be passed from one generation to another,” said Pollock.

One example of how older generations have benefited future generations was on full display during the ceremony for the community center. Long-time activist Liz DiCarlo gave remarks about John Lipsky and George Whittaker, who left their estate to LGBTQ causes through the Lipsky-Whittaker Fund.

Lipsky was from Rhode Island, and Whittaker was from New Bedford. Both went into the military during World War II, and lived in New York after they were discharged. They met and fell in love, and they realized that returning home as out gay men wasn’t an option. They moved to Los Angeles and later returned to the South Coast as part of their retirement.

DiCarlo said “they didn’t tell us what to do with their estate, but we found a letter that George had written,” she explained. Because of the “incredible hate and disdain they had experienced as gay men growing up,” they wanted their estate to benefit gay youth and to fight the HIV/AIDS epidemic.

“They would be very proud to know the work that has been done here,” DiCarlo said.

To learn more about the South Coast LGBTQ+ Network or to support the community center, visit: sclgbtqnetwork.org.

As part of Pride Month, the Network will be screening the film “Gen Silent” online. The film profiles older LGBT people as they navigate end-of-life care. For more information, and for a full list of activities during Pride 2021, visit the Network’s Facebook page at: facebook.com/SCLGBTQNETWORK.