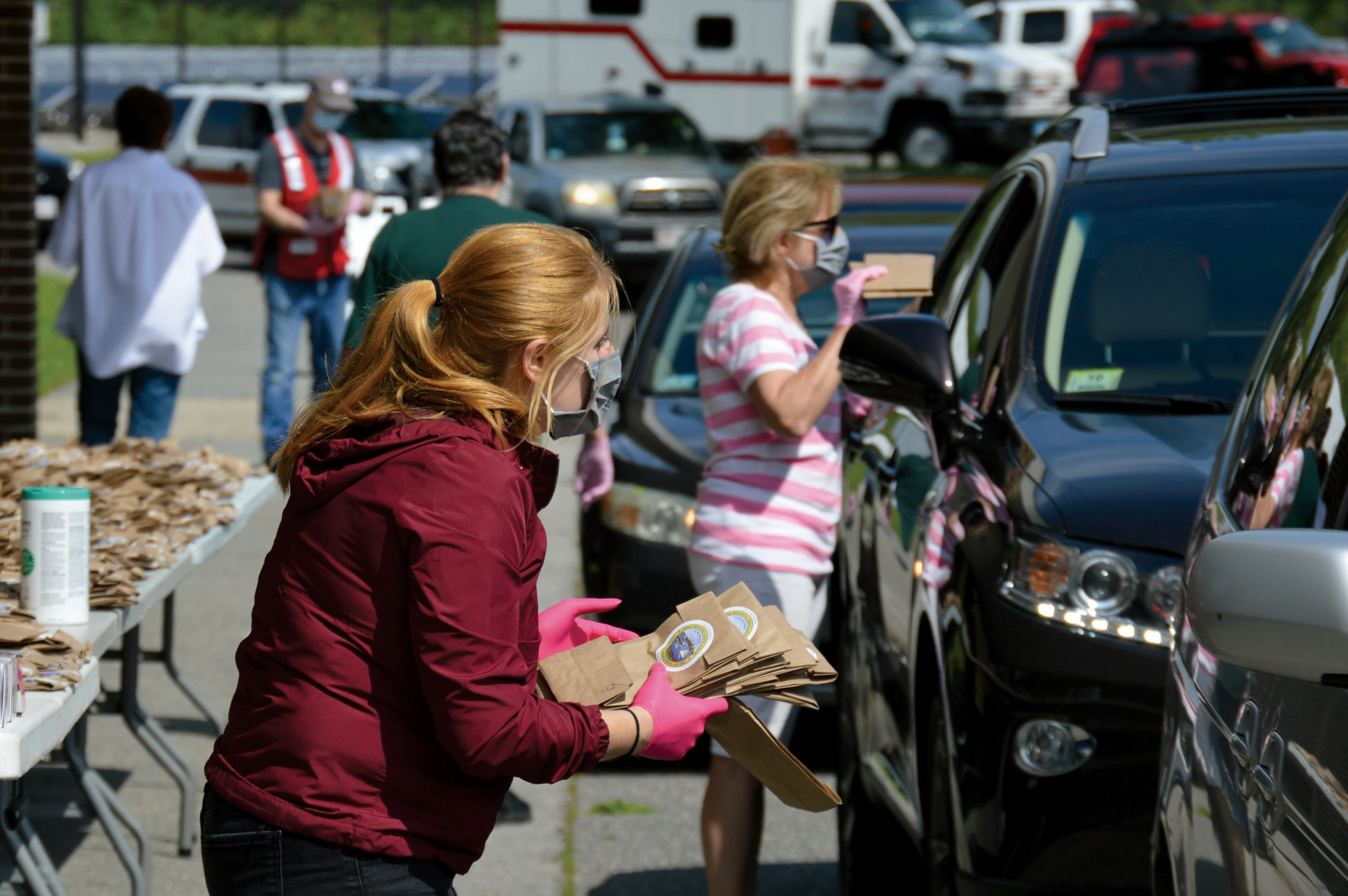 Natalia Mariano, a Red Cross worker, distributed masks on May 30 during New Bedford’s “NB Mask” project. The city offered free masks to citizens across three weekends in late spring to help slow the spread of COVID-19. As the pandemic continues, managing mental health in addition to physical health remains critical.

This article originally appeared in the July 2020 edition of Senior Scope. Article and photos by Seth Thomas.

Massachusetts has been slowly reopening since Memorial Day. But, as many residents attempt to find normalcy and reacquaint themselves with friends whom they haven’t seen in months, directives from the state caution older adults that the safest place for them is at home in isolation.

This extended period of isolation will help shield older people from the threat of COVID-19, but too much time alone can impact overall health. According to the National Institutes of Health, social isolation has been linked to a higher risk for a variety of health conditions, including high blood pressure, heart disease, and a weakened immune system, as well as mental health issues, like anxiety, depression, and cognitive decline.

Since the early days of the outbreak in the U.S., a local group, the South Coast Community Response Corps, has brought together a variety of agencies, organizations and individuals that are focused on basic needs and support services.

Reverend David Lima, who has been leading weekly meetings for the Response Corps, said some of the participating agencies – even those that aren’t necessarily tied to mental health services – expressed worry that their clients were struggling with anxiety brought on by the pandemic.

“It’s tough for most of us to think we need a counselor or to ask others for assistance with something that’s going in the mind rather than in the body,” said Lima. “We all have moments of anxiety, depression or isolation. But COVID has taken that to another level.”

According to a recent health survey by the Kaiser Family Foundation, in the month of May, nearly 40 percent of U.S. adults reported that COVID-related stress had negatively impacted their mental health, including 12 percent who said it was having a “major” impact.

“Things have changed since the pandemic,” said Darcy Lee, the executive director of the Samaritans of Fall River/New Bedford. “More people are calling because of the isolation that they’re feeling. Having to be away from others initially caused a lot of distress in people.”

“They’re afraid to be out there in the world because COVID is still a threat,” she said.

The Samaritans of FR/NB field about 1,400 calls a year from people who are experiencing loneliness, depression or suicidal thoughts. Trained volunteers answer calls on a local, toll-free line, the Samaritans’ statewide line, and the National Suicide Prevention Lifeline.

Volunteers are specially trained in crisis management and suicide prevention and serve as compassionate, non-judgmental listeners. Lee said that anyone can call if they are in need of emotional support.

“Some people call just to unburden themselves. Maybe they’re having a stressful day, and they just want to speak to someone who won’t judge them. Others call because they are suicidal and they need services related to that. It’s a broad spectrum of calls that we receive,” she said.

“The number of callers who reported that they were suicidal went up; however, the number of times that we’ve had to send rescue has decreased,” Lee said. “So people are feeling suicidal with regards to the pandemic. But, by calling our hotline, our volunteers have been able to get them to a place where they feel safe to themselves again.”

The Samaritans also offer a check-in service called KARE Calls, in which a volunteer will call senior clients weekly. Lee said the service helps participants from feeling lonely, and the calls enable people to share thoughts and feelings.

“Mental health is as important as someone’s physical well-being, said Lee. “While people may feel like they can’t share how they feel with a family member or friend for fear that the person would say ‘you need to get over that’ or ‘I’ve heard that before’ – our volunteers will never say that. They are here to listen.”

Melissa S. Ahaesy, M.Ed, a licensed mental health counselor who specializes in elder mental health, said she has reinforced to her patients that they are not alone in the way they’re feeling.

“Everyone feels alone right now. We’re all feeling lonely and out of sorts,” said Ahaesy.

She said her older clients have a tendency to downplay feelings of anxiety and depression, often repeating the refrain ‘I’m fine,’ even if that’s far from the truth.

“They’ve been raised to not ‘bother’ people. But, when they say they’re fine, they don’t get that extra phone call from a grandchild,” she cautioned.

Throughout the crisis, she has found that many clients have been glued to the TV, watching a constant stream of COVID news alerts, which has only increased their anxiety. After a spring spent quarantined indoors, she has been encouraging clients to turn off the TV and head outside for a walk or sitting with a friend outdoors (all while practicing social distancing and while wearing a mask).

Creating a schedule for yourself – even if it’s marking your calendar with simple activities like going for a walk, cooking something new, or calling a friend – can help break up the day and give you something to look forward to.

She also noted that now is the time to stock up on activities, such as puzzles, word searches or books, in the event that a second wave occurs this fall.

If you’re feeling like you’re not yourself or your routine is changing, you may want to consider counseling or talk therapy, she said. Other warning signs could include an unwillingness to get out of bed, a loss of appetite, frequent crying, irritability or feeling antisocial.

“There will be an end to it,” said Ahaesy. “But don’t be afraid to call people and let them know you’re lonely.”

The South Coast Community Response Corps can be reached at 508-997-4515 or online at southcoastcrc.org. You can find more info online at gnbcares.org.

For more information about Kare Calls or Safe Place (a support group for survivors of suicide victims), please contact Darcy Lee at 508-679-9777 ext. 10 or email at samaritansfrnb@gmail.com.