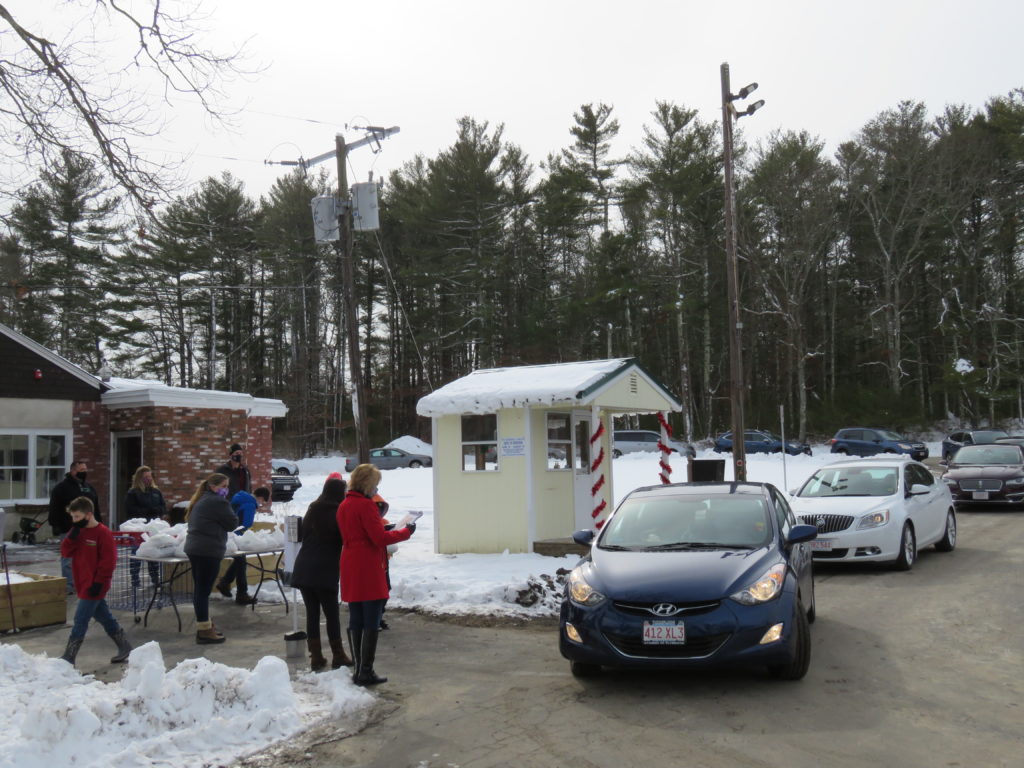 This winter, The Marion Council on Aging has offered “Grab and Go” meals at the Benjamin D. Cushing Community Center on Tuesdays and Thursdays. The Valentine’s Day event was also held as a drive-through, with a long line of cars forming before the event officially began.

This article originally appeared in the March 2021 edition of Senior Scope. Article and photos by Seth Thomas.

With temperatures hovering around freezing, a crew from the Marion Council on Aging and Tri Town Motors handed out hot meals in a chilly parking lot to celebrate Valentine’s Day.

The event was sponsored by Tri Town Motors, a used car dealership on Wareham Road in Marion. This was the second year the company hosted a Valentine’s Day celebration at the center – though it was the first year they did so from outside the walls of the warm building.

Well before the event was scheduled to begin at 1 p.m. on Feb. 13, a long row of cars had already formed in the driveway that surrounds the Benjamin D. Cushing Community Center. Dwight Crosby, the owner of Tri Town Motors, said he was happy to give back to his community despite the restrictions on gathering.

“We’re a small Christian-owned dealership, and we believe in giving back to the community. There are all different kinds of ways to tithe, and this is one of them for us,” he said. “We’re blessed, and we’d like to give some back.”

“I wish we could have something with a DJ and some dancing,” he added. “But that will come.”

Even throughout the winter months, the Marion Council on Aging has been serving soup and sandwiches through drive-through events on Tuesdays and Thursdays. A life guard shack, borrowed from the town beach and equipped with a small heater, sits aside the center and has become a makeshift drive-through window. 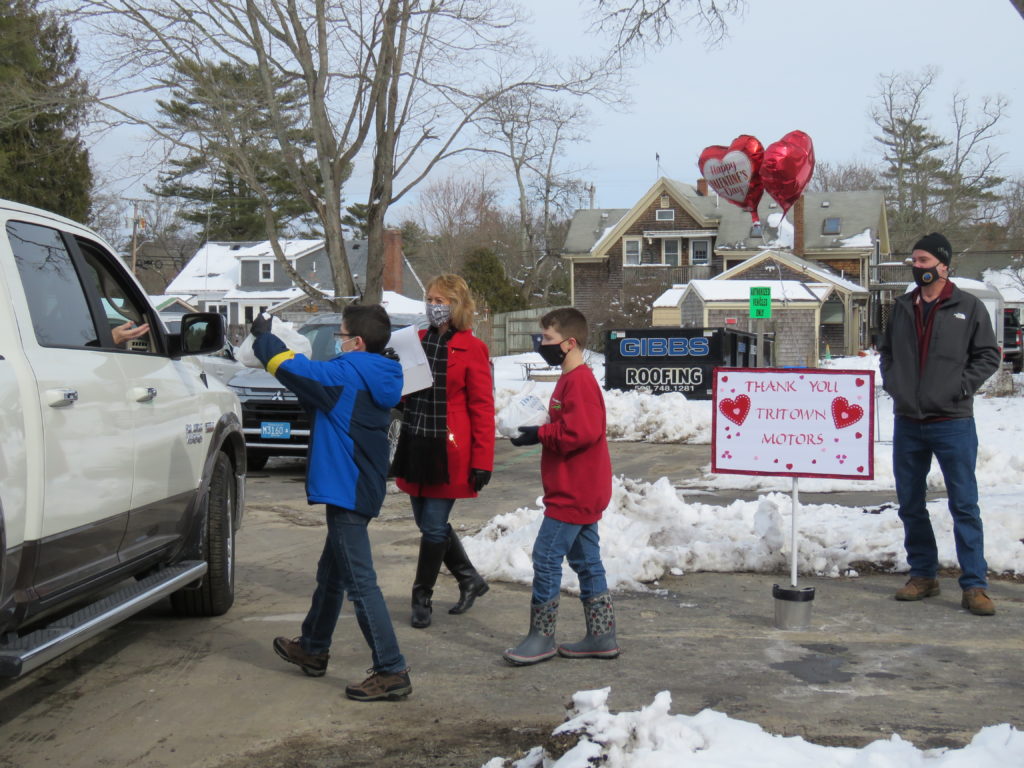 “We figured it was important,” said Karen Gregory, the director of the Council on Aging, who helps prepare the to-go meals. “It gives people something to look forward to and gets them out of the house.”

The parking lot itself has been busy with activity in recent weeks. First responders were vaccinated beneath a tent in the parking lot during Phase 1 of the state’s vaccination rollout. With the state moving toward a wider distribution model, the Town of Marion later announced they’re unlikely to receive future first-time doses.

Nevertheless, as older adults became eligible, the COA has been connected with Marion residents to help them register for an appointment.

Linda Jackvony, program coordinator at the Marion COA, said the flurry of activity in the parking lot has helped the COA stay connected with residents despite social distancing protocols.

Throughout the pandemic, the COA has also made an effort to reach patrons in their own homes, whether its recording classes for Old Rochester Community Television or hosting its memory café on Zoom. Jackvony noted that last year’s Valentine’s Day bash especially stood out in memory because it was the last big party the COA hosted before COVID-19 swept through the nation. Still, they have remained connected to each other – even if it’s through a car window.

“We keep in contact with everybody constantly,” said Jackvony. “For something like this, they look forward to it.”