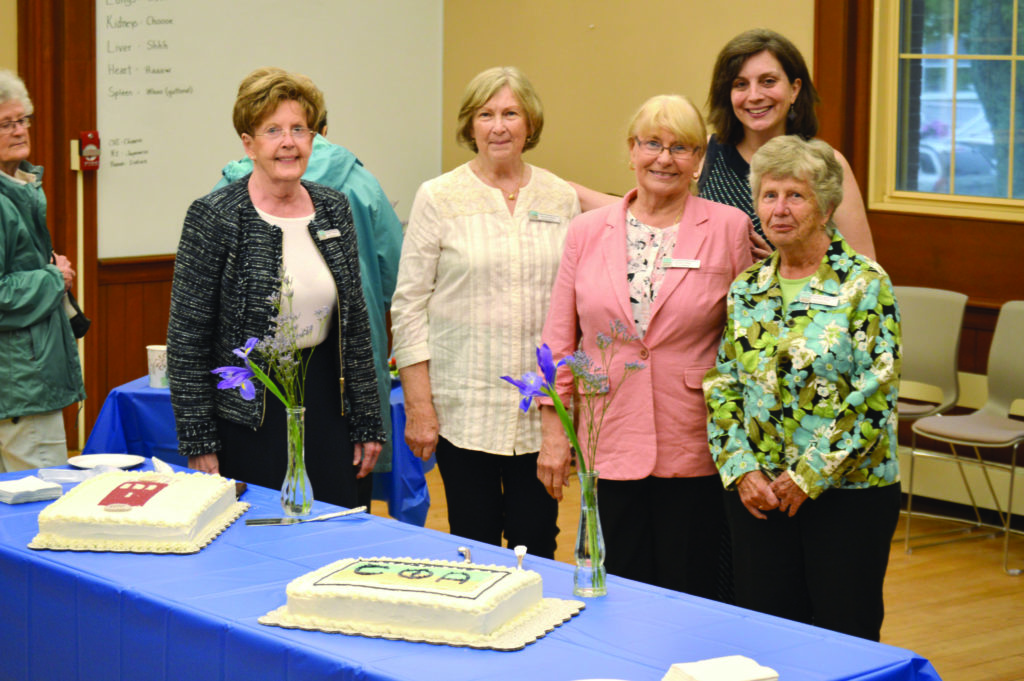 The Board members and Director of the Mattapoisett Council on Aging during the open house held on June 13.

This article originally appeared in the July 2019 edition of Senior Scope. Article and photo by Seth Thomas.

While Henry Huttleston Rogers is perhaps best known locally for the opulent buildings he gifted to the Town of Fairhaven more than a century ago, he also made one generous contribution to the Town of Mattapoisett.

On June 13, the Mattapoisett Council on Aging held an open house, which incorporated a history lesson on the building, its benefactor and the architect who designed it. Jacqueline Coucci, the Executive Director of the Mattapoisett COA, said the idea for the event came about when Rachel McGourthy, a member of the center’s board, had been admiring a dedication plaque installed in the lobby and was curious to learn more about the building’s history.

The Mattapoisett Council on Aging is situated in the south end of the Center School, located on Barstow Street in Mattapoisett. Built in 1898, the school was the sole gift to the Town of Mattapoisett from Rogers.

“A lot of our participants used to go to school here,” said Coucci. “All our rooms are former classrooms. We have use of four former classrooms, one of which houses our office. The other three are used for programs and activities.”

Historian and former teacher Bob Foster provided a lengthy lecture on Rogers, who came to prominence during The Gilded Age, the period of American history following the Civil War. It was an era marked by industrialization and economic growth.

“People always want to know how Rogers made his money and how much money he had. Both of those answers are a little complex,” said Foster. In 1856 at age 16, Rogers was part of the first graduating class in the first high school in Fairhaven. He spent several years working odd jobs before taking his life’s savings – $600 – and moving to western Pennsylvania, where the oil industry was gaining momentum.

He and a childhood friend took out a bank loan and built an oil refinery. In their first year, they made a $30,000 profit. The business continued until 1867, when Rogers took on a new partner, investor Charles Pratt, and the two built what became the second-largest refinery on the East Coast. The largest refinery belonged to John D. Rockefeller’s Standard Oil Company.

“Rockefeller didn’t like competition, and he had a habit of driving competitors out of business,” said Foster. “Rogers and Pratt decided to negotiate with him. Rogers probably made the wisest financial decision he made during his whole life: instead of a cash buyout, which a lot of guys took from Rockefeller, he insisted on stock in the Standard Oil Company and a seat on the board of directors for himself and Pratt.”

Foster said that, by the time Rogers passed away in 1909, he was on the board of directors of 19 of the 20 companies that made up the Standard Oil Trust, and he was the vice president of six of those companies.

As the money came pouring in, Rogers turned to philanthropy, gifting the town of Fairhaven with numerous buildings, including a library, a town hall and a new high school. While originally from Fairhaven, Rogers had gone to school in Mattapoisett for a few years.

“As a boy, a youth, and a man, I have known Mattapoisett in detail for about fifty years,” Rogers said in January 1899 during a dedication ceremony of the Center School. “The beginning of my education, the alphabet, was learned in Fairhaven. But before I was six years old, my parents came to Mattapoisett, and I attended my first school at Eagle Hall.”

“Did he plan on building all those buildings? We’re not really sure,” said Foster. “But he was an extremely generous man. He loved the town, and he also had a lot of money. When he died, to the best that they could figure, he had $150 million in 1909 money.”

Visit the historic building yourself. The Mattapoisett Council on Aging is located at 17 Barstow St. in Mattapoisett. You can also view a video tour of the clock tower produced by ORCTV by clicking here.