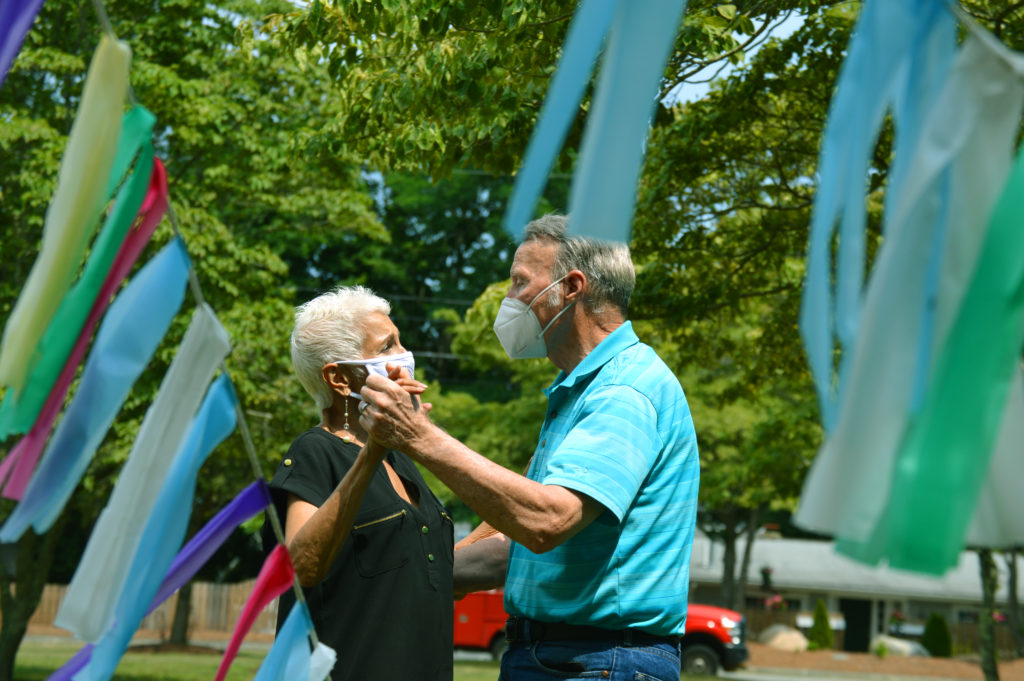 Christine and Jonathan Gallagher, masked and dancing during the Waterfront Memory Café’s first in-person gathering since the global pandemic shut down the Marion Council on Aging to the public. While the memory café met online through Zoom since May, the group was happy to meet outside, beneath a colorful tent on the COA’s front lawn.

For a brief moment this summer, it was easy to forget about the global pandemic and breaking news alerts as a small group gathered in Marion to enjoy the weather and each other’s company.

Patrons of the Waterfront Memory Café gathered outside the Benjamin D. Cushing Community Center on July 22 for their first in-person meeting since the coronavirus shuttered Marion’s Council on Aging. While the group stayed in touch this spring over the video conferencing platform Zoom, the excitement that afternoon was palpable as the group mingled.

Linda Jackvony, program coordinator at the Marion Council on Aging, said the pandemic had initially canceled the program outright, but she would call members to check in. When it became apparent that the COAs would remain closed for the long term, the group eventually transitioned online in May.

“The first [Zoom meeting] was pretty funny. We looked like the Brady Bunch with bad hair,” said Jackvony. “We all needed haircuts. We had a lot of laughs.”

The concept of a memory café was initially developed in Europe nearly 20 years ago before slowly taking hold in America over the past decade. The gatherings provide a supportive network for those affected by memory loss and their caregivers. Memory cafés adhere to a loose schedule, which could include activities, guest speakers or music.

“It’s something they look forward to,” said Jackvony. “The pandemic has been tough, especially for people with dementia. Even on Zoom, we’ve noticed a difference in some of them. They’re very quiet.”

This summer, the Marion COA has been slowly reopening, offering more programs for the public exclusively outdoors beneath a large, yellow tent, which is adorned with strips of colorful plastic table cloths. Several garden boxes are set off to one side, and as members arrived that afternoon, they passed through to check on the green beans.

Joan Asker, who volunteers at the memory café, said that Zoom provided a nice opportunity to catch up and connect, but everybody was anticipating seeing one another in person following a lengthy lockdown.

“These people have had such valuable lives. They’ve put so much work into their communities, their families and their professions,” said Asker. “Now with Alzheimer’s, they’re used to thinking that they’re just an Alzheimer’s patient. But they’re real people. Getting to know them is a precious thing to me.”

While Zoom may not be a perfect solution, Asker suspects that it was enough to keep the group together throughout the quarantine.

“We’ve gotten to know one another,” she said. “Everybody is very close, very interested in each other.” 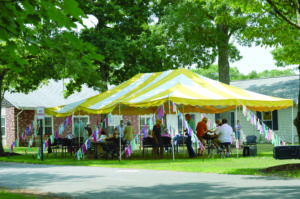 Clearly, the group was very interested in dancing, too. Dave Valero, a musician who himself was happy to be returning to some sense of normalcy and to be booking gigs in the reopening economy, performed for the group. Laura Roy was there to dance with her friends – even if she had to do so behind a mask, at a safe distance from others.

“Everybody’s a little shy today; we’re trying to stay away from other people. But this is wonderful,” said Roy, motioning toward the crowd.

Roy said, at age 91, she was taking the pandemic seriously, and has been spending most her time at home. She wasn’t nervous about returning to the council on aging, though.

For more information on the memory café, call the Marion Council on Aging at 508-748-3570. ORCTV is airing some of the COA’s classes. For more info, visit www.orctv.org.