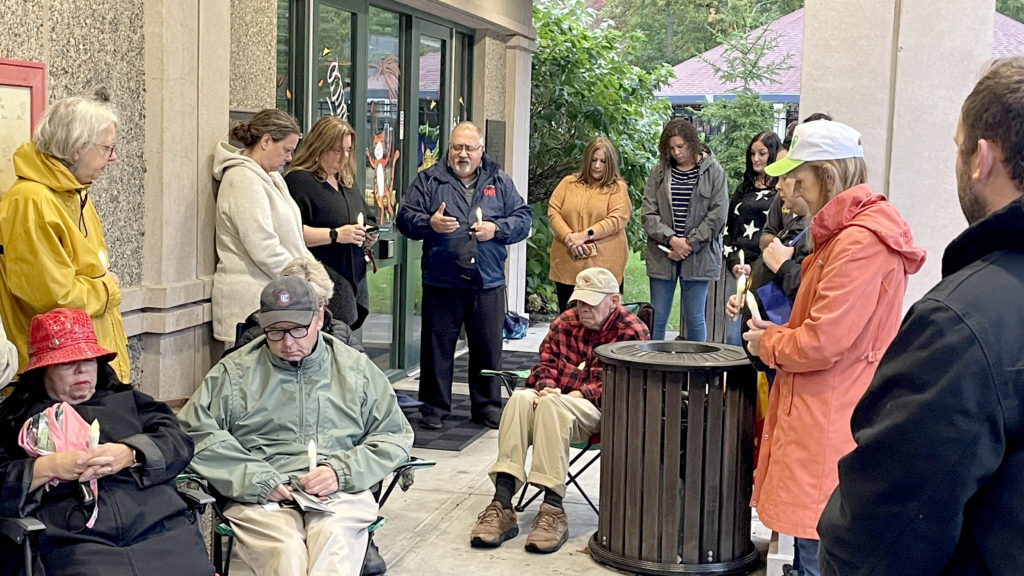 Reverend David Lima leads a group through a prayer outside the entrance of the Buttonwood Park Zoo on Oct. 10, World Mental Health Day. Lima is part of Help & Hope Southcoast, a local group of community advocates that formed shortly after the pandemic began to try and reduce the stigma surrounding mental health issues.

Following nearly two years of restrictions, job losses, isolation and grief, the pandemic has prompted an increase in the number of Americans reporting symptoms related to anxiety and depression, according to the Centers for Disease Control and Prevention.

This year’s World Mental Health Day, held on Oct. 10, was marked locally by a candlelight vigil outside Buttonwood Park Zoo. The steady rain did not deter a crowd of about two dozen from gathering to discuss topic.

“We all know someone who struggles from time to time – if not every day – with mental health issues,” said State Rep. Antonio Cabral, emphasizing the importance of reducing negative public perceptions that prevent people from seeking treatment.

According to the American Psychiatric Association, half of those with mental illness do not receive help for their disorders, mostly because they fear being treated differently or losing their livelihoods as a result of coming forward. Stigma not only prevents people from seeking treatment, it can worsen mental health issues.

Left untreated, mental health issues can also impact your physical health. Chronic stress has been linked to an increased risk for heart attacks, stroke or obesity. And managing other chronic conditions may become more challenging for those grappling with depression and anxiety.

While Olsen-Vieira said that COVID-19 was the primary driving force behind more people seeking treatment, the media has played a role as well. This past year, there have been a string of reports of top athletes and other public figures stepping aside as they address their personal struggles.

Days prior to the candlelight vigil, Carey Price, a star goaltender for the Montreal Canadiens entered a player assistance program maintained by the National Hockey League Players’ Association, which provides mental health support services to players and their families.

Not long after the announcement, the 34-year-old goalie’s wife, Angela Price, wrote about the decision on social media.

“Part of the privilege of being in the position our family is in, is that we also get a public platform to show how there is and can be a path to light for anyone who is struggling,” she wrote in an Instagram post. “No matter what is on the line, we hope we can communicate the importance of putting your mental health first not just by saying it, but by showing up and doing the work to get better.”

This announcement came on the heels of similar decisions from other high-profile athletes, most notably Simone Biles who skipped several events during the Tokyo Olympics.

“People are finally starting to say, ‘I’m not concerned about what people think; I have to be concerned about how I feel,’” said Reverend David Lima, the executive minister of the Inter-Church Council of Greater New Bedford, who provided remarks at the event. “We need to break through the shame and the stigma.”

That shift has had real impacts on society. Research indicates that knowing someone or having contact with someone with mental illness reduces stigma, according to the American Psychiatric Association.

Early in the pandemic, numerous agencies in the South Coast formed a campaign called Help & Hope Southcoast, which was aimed at normalizing the topic of mental health through its blog, social media presence and website, which has an extensive database of local resources.

“The fact that we’re talking about it, makes other people feel encouraged to come out and get the help they need,” Lima said.

The New Bedford Site Office of the Department of Mental Health can be reached at 508-996-7900.