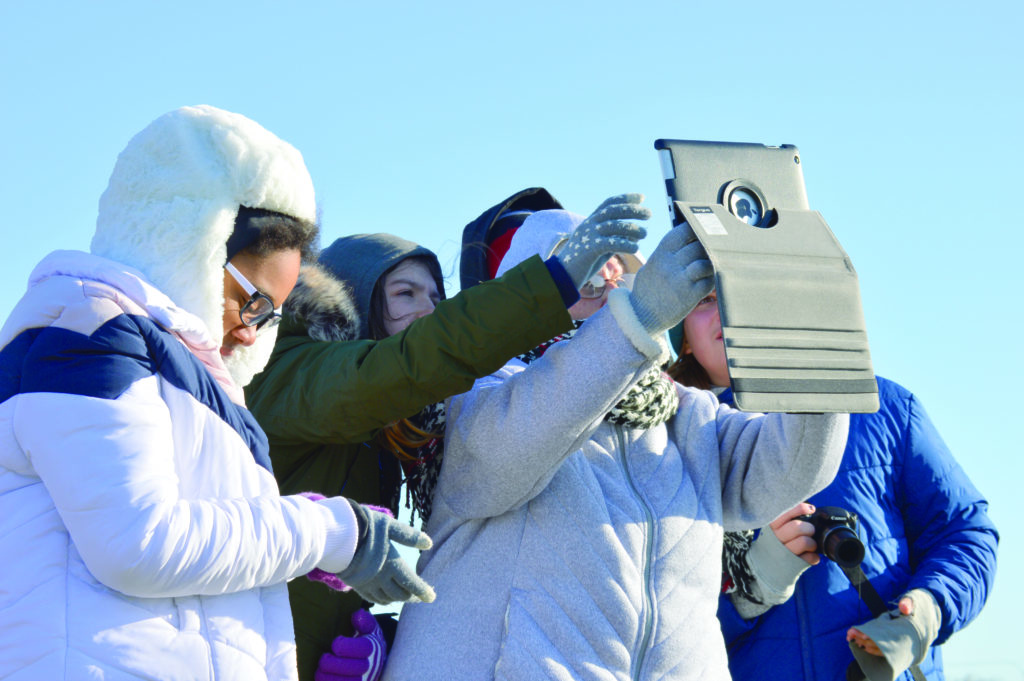 84-year-old Jean Baldwin holds an iPad toward the American flag flying above Fort Phoenix on a cold, windy morning. Baldwin was taking part in a photography class, which was taught by John Sladewski’s 7th grade photography students.

This article originally appeared in the December 2019 edition of Senior Scope. Article and photos by Seth Thomas.

At 8 a.m., snow was still clinging to the treetops from a winter storm that had swept through the previous night, but that didn’t stop a group of students – whose ages ranged from 12 to 84 – from gathering at Fort Phoenix for a lesson on photography.

Seventh graders from Elizabeth Hastings Middle School paired up with patrons of the Fairhaven Council on Aging to teach them tips and tricks about landing the perfect shot. During the frosty, early morning hours of Nov. 13, seniors held their smartphones and iPads toward the ocean as kids huddled around them, tapping their screens and making minor adjustments as they offered advice and encouragement.

John Sladewski’s Digital Photography class and the group from the council on aging alternated between snapping photos and rushing back to the bus to warm up after braving the strong winds and 23-degree weather.

Fairhaven Council on Aging Director Anne Silvia noted that while some smartphone users may know how to take a picture on their phone, they may not know all the options at their fingertips. Learning all the bells and whistles was part of the plan that morning.

Sladewski, who is working on a master’s degree in art education at UMass Dartmouth, organized the project as part of his curriculum.

“I wanted my students to teach the seniors those functions and teach them some elements of photography, too, such as composition, while they’re making photographs,” said Sladeski. 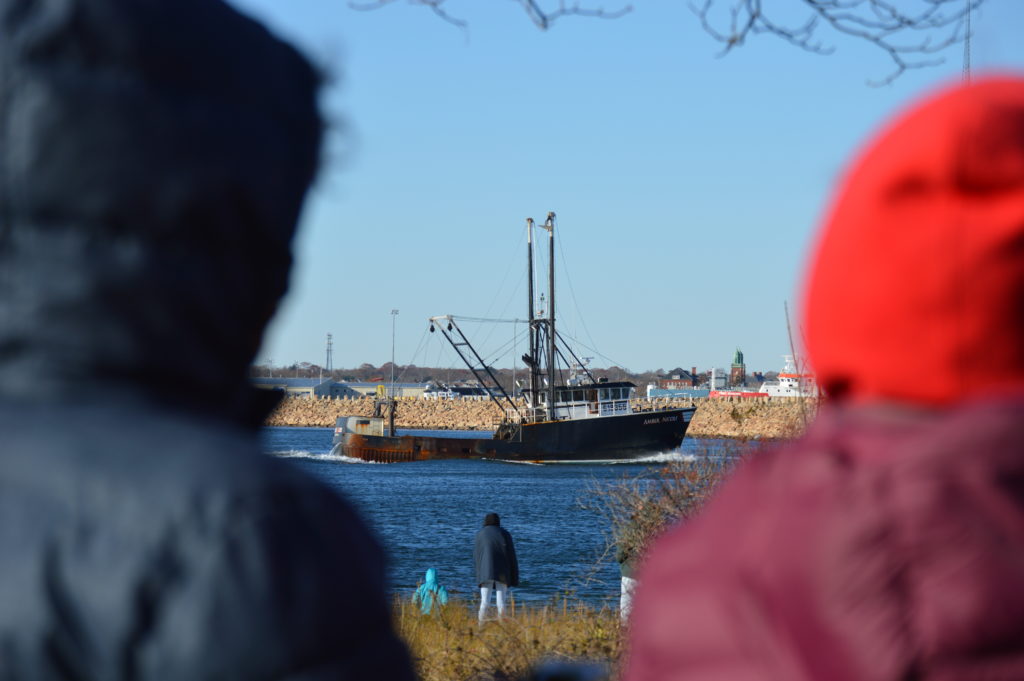 The students worked with the seniors across multiple sessions. After the initial photo shoot at Fort Phoenix, the group returned to the middle school where students taught the seniors how to upload the photos onto a computer, edit them and print them out for a collage.

The end product will be revealed at a showing at the Fairhaven Council on Aging in December for all the participants as well as their friends and families.

Freda St. Marie said she enjoyed being coached by the kids.

“I’ve been interested in photography for a long time,” said St. Marie while on a break in a bustling middle school lunchroom. An avid walker, St. Marie said she often ventures through Fort Phoenix and around Fairhaven snapping photos of buildings and nature, though she conceded that she’s unsure how to use the camera beyond a simple button click.

“You learn something new all the time,” she said. “Wait till you see them! I took some awesome photos.”

St. Marie spent her time at Fort Phoenix undeterred by the weather, smiling as she pointed her camera toward nature and several students who were climbing around the fort’s cannons.

“You can do a lot of different things on a phone,” said Ben Comey, a 12-year-old student. “We showed them the zoom function, and we also showed them that you don’t always have to hold the phone vertically – you can hold it horizontally.” 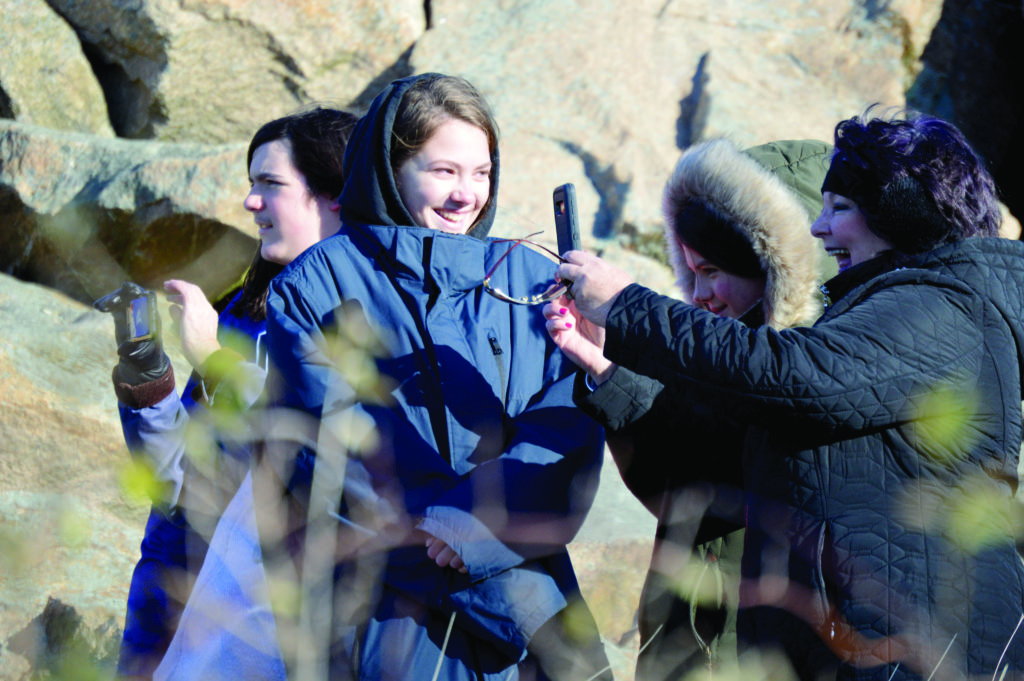 Freda St. Marie (right) lines up a shot of the ocean – with encouragement from John Sladewski’s 7th graders. Students from Hastings Middle School gave photography lessons to a group from the Fairhaven COA this November.

Seventh grader CJ Coelho said, for photographers who are just getting started, a little patience can go a long way.

“Pay attention,” Coelho said. “Look before and after you take a photo. And try not to move. Sometimes, you have to wait a little bit for the camera to auto-focus on the subject.”

As students of all ages sorted through their photos in Sladewki’s classroom, Jean Baldwin of the Fairhaven COA was impressed with the group’s work.

“It was just lovely. I loved interacting with the youngsters. I’m learning a little bit from each one of them,” said Jean Baldwin. “You’re never too old to learn – even at 84.”