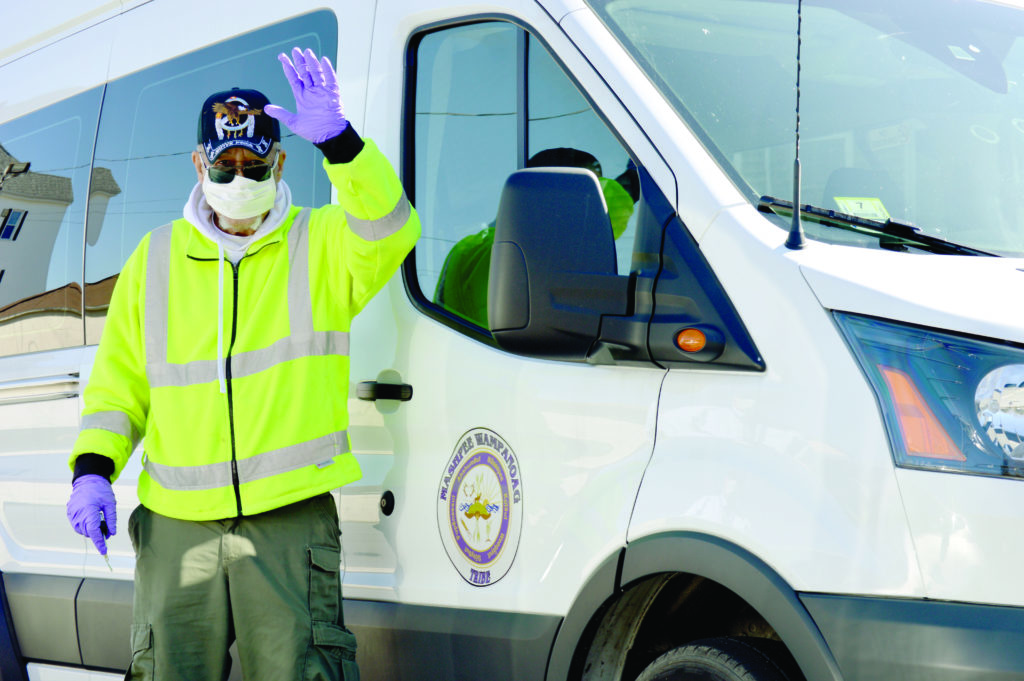 George Gray of the Mashpee Wampanoag Tribe was one of many recruits who helped deliver meals during the crisis.

This article originally appeared in the June 2020 edition of Senior Scope. Article and photos by Seth Thomas.

By the end of March 2020, the public had been buried in several weeks’ worth of rapidly updating information about the new coronavirus. As researchers scrambled to better understand the scope of the threat, one fact that public health experts agreed on almost immediately was that COVID-19 was especially threatening to older adults and those with underlying health conditions.

Grocery stores and supermarkets were quick to respond by allotting early morning hours exclusively to those populations. While these modifications made stores safer for seniors, panic-buying cleared shelves and uncertainty about the exact nature of the virus made shoppers wary of entering public spaces. And for some, simply affording food was out of reach.

The nonprofit Feeding America, in its most recent annual report on senior food access, found that nearly 5.3 million adults age 60 and above are food insecure, meaning those people have limited access to nutritious food because they cannot afford to buy it. Moreover, the report found that food-insecure older adults are more likely to be living with chronic health conditions, putting them at greater risk for severe complications from COVID-19.

Paula Shiner, CEO of Coastline, said that ensuring food access has always been a major priority for Coastline, but the pandemic amplified those concerns. Coastline manages the Meals on Wheels program in the South Coast, from Dartmouth to the Tri-town area. Last year the agency served about 430,000 meals, either at congregate meals sites, like the local councils on aging, or through its home-delivery service.

On March 16, social distancing protocols prompted the local councils on aging to close to the public, and in the weeks that followed, Coastline’s Meals on Wheels program saw nearly a 30 percent increase in demand for home-delivered meals. To meet demand, Coastline reached out to the councils on aging in the surrounding communities and put word out for volunteers and extra drivers.

“We would not have been able to increase the volume the way we have without the extra support,” said Shiner. “When we needed them, they were there for us. I feel so honored and proud to be part of this community. ”

By taking on numerous volunteers and new drivers, Coastline was able to avert a suspension of service. Meals on Wheels programs throughout the nation experienced an increase in demand at the same time that volunteers and drivers were staying home for their own safety. According to Meals on Wheels America, about 75 percent of the program’s volunteers are age 55 and older. The average age of a volunteer is 62.

As the severity of the crisis unfolded, some Meals on Wheels programs were forced to temporarily suspend deliveries of hot meals.

Philip Beard, the Director of Coastline’s Nutrition Program, said the new drivers were sourced from throughout the region, including volunteers from the councils on aging and the broader community, as well as drivers from the Acushnet Emergency Management Agency, STAT Southcoast EMS, the Mashpee Wampanoag Tribe and the New Bedford Council on Aging, among others.

“We really sense the importance of what we’re doing,” said Beard. “Everyone has been very supportive. And all the councils on aging have been terrific. They’ve provided us with manpower, space and expertise.” 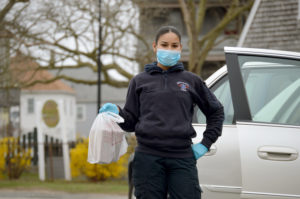 Beyond meeting demand, Coastline was able to provide supplemental food items, such as snacks or sandwiches, as well as deliver extra shelf-stable and freezer-stable meals. Consumers who were identified as being especially at-risk to malnutrition and hunger were given additional food to store.

With the Councils on Aging closed to the public, Coastline’s Nutrition Program has been occupying the centers during the week to prepare meals and organize deliveries for the new drivers.

A few days a week, before starting her day working from home, Sue Oliveira volunteers at the Rosemary S. Tierney Community Center. She assembles meals alongside Coastline staffers before the drivers begin arriving around 9:30 a.m. to make deliveries in New Bedford.

Oliveira, who works as the Director of Risk and Compliance at First Citizens’ Credit Union, said taking action to help others during this crisis has been rewarding.

“It makes me feel like I’m helping and contributing,” said Oliveira. “On the days I volunteer, I don’t have a headache. It’s physically and mentally rewarding. There’s nothing that will make you feel better.”