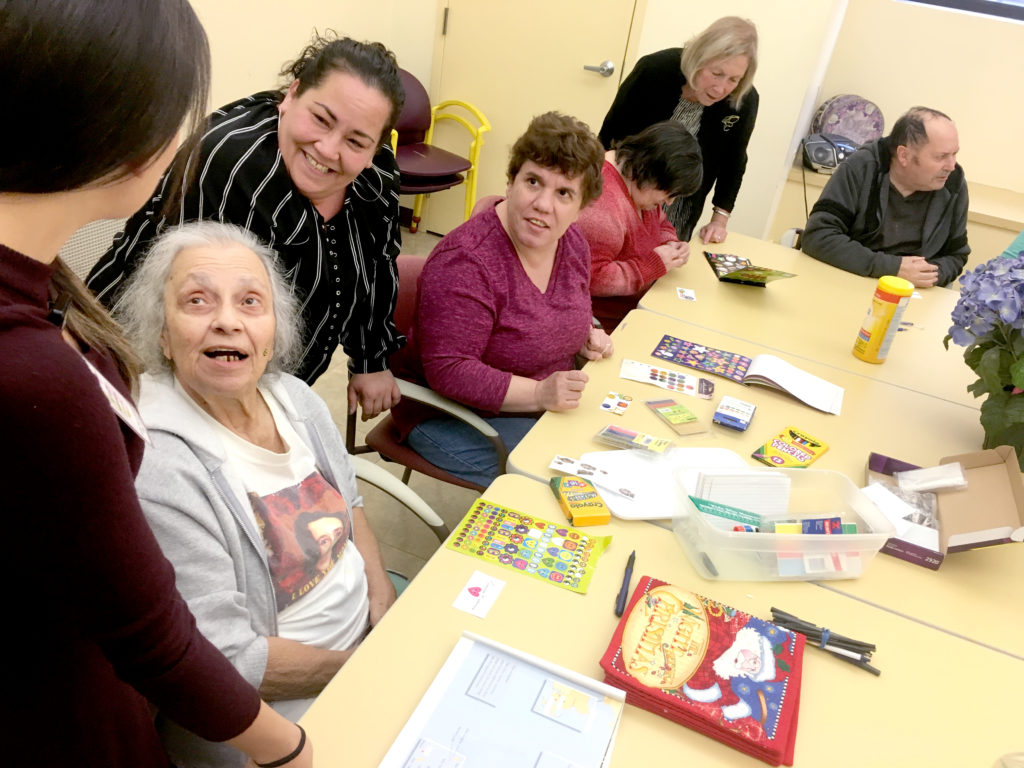 Natasha Franco (center) leads guests through activities during the Portuguese Memory Café’s open house, which was held on Nov. 16. The new memory café, housed at Project Independence in New Bedford, aims to be a supportive space for Portuguese and bilingual speakers who are experiencing memory loss.

This article originally appeared in the December 2018 edition of Senior Scope. Article and photos by Seth Thomas.

As more and more memory cafés open across the state, a recently launched support group in New Bedford stands out as one of the first directed at the Portuguese-speaking community.

On Nov. 16, Project Independence hosted an open house for a new memory café tailored to Portuguese and bilingual speakers. Café patrons gathered for activities with a large group of visitors and volunteers. The project came about through a joint effort between Coastline Elderly Services, the New Bedford Council on Aging and Project Independence.

According to the Memory Café Directory, a website that aggregates cafés currently advertising throughout the nation, this is the first memory café devoted to the Portuguese-speaking community in the entire nation.

Patricia Geggatt-Midurski, project coordinator at Coastline, described memory cafés as a place where those who are experiencing memory loss and their caregivers can feel at ease in a supportive environment.

“It’s about having fun. It’s like a party. There shouldn’t be any stress,” Geggatt-Midurski said. “Participants shouldn’t be worried about whether or not they’re saying the right thing, or if they’re wearing the right outfit or if they’re having a bad day. This is about being with people who are walking the same walk that you are.”

The concept of a memory café initially developed in Europe nearly 20 years ago before slowly taking hold in America over the past decade. The gatherings provide a support group for those affected by memory loss without a rigid structure. A typical day at a memory café could include activities, guest speakers or music.

The group will meet on Friday afternoons at Project Independence’s west wing, which was renovated in 2002. The space includes three activity rooms connected by a cozy central sitting area. Karen Maciulewicz, executive director of Project Independence, said the café is a perfect match for the adult day health care center.

“We have participants here who speak Portuguese and who have issues with their memory,” said Maciulewicz. “It’s also a nice way for us to open up our adult day health program to members of the community, so that, before they
need our services, they will become familiar with what we do here.”

Natasha Franco, who works at the City of New Bedford’s Department of Community Services and who will be facilitating the group, said she hopes the guests will begin to feel more comfortable in their own skin. 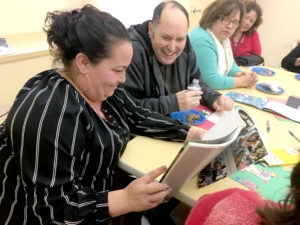 “I’m hoping that the Portuguese people are able to sit down, reminisce and not feel judged because of their memory loss,” said Franco. “We want them to feel comfortable no matter what they want to do – whether it’s telling a story, reading a book or talking about life back in Portugal.”

During the open house, Standard-Times photographer Peter Pereira, who was there covering the event, gave an impromptu presentation in Portuguese on “A Nossa Vida: The Portuguese Experience in America,” a book published by The Standard-Times. He spoke about the photographs he contributed to the book, and, as he spoke about the various locations in Portugal he visited during the book’s production, guests of the memory café perked up.

“We know that, for most individuals with dementia, long-term memories are intact,” said Midurski. “Most of the time, we can tap into positive memories. We know that reminiscing will bring great joy.”

The new café is also looking for volunteers who, Midurski said, will act as a “party host or hostess.”

Volunteers can expect to socialize with the group and make sure guests are staying engaged.

Silvia Araujo, a bilingual speaker and first-year student enrolled in Bristol Community College’s Occupational Therapy Assistant program, said she happened to be visiting Project Independence on a school assignment and volunteered during the open house.

“I had such a good time,” said Araujo, noting that she often doesn’t get to hear the perspective of Portuguese elders. “They were willing to speak to me about everything. It was absolutely amazing.”

Midurski hopes the latest memory café to open in the area will be another avenue of support for those experiencing memory loss and for their caregivers.

“It is a horrific journey to find yourself on. There’s so much grief and sadness. My hope is that hosting these memory cafés will bring some joy and normalcy into their lives,” she said.

The Portuguese Memory Café meets every Friday from 12:30 to 2 p.m. at Project Independence, located at 250 Elm St. in New Bedford. Please RSVP if you plan on attending. For more information in Portuguese, contact Natasha Franco at 508-979-1693 or natasha.franco@newbedford-ma.gov. For more info in English, contact Patricia Midurski at 508-742-9116 or pmidurski@coastlinenb.org.

To learn more about the program, visit the Caregiver Companion & Support Services website by clicking here.