For New Bedford Symphony Orchestra, the Show Goes On 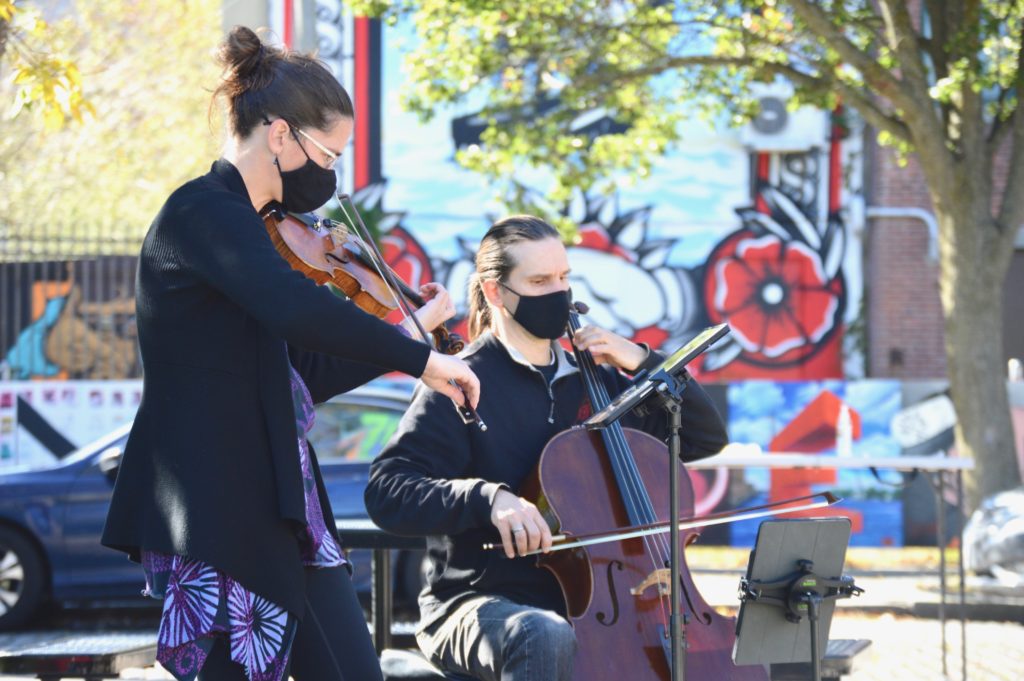 The new season of the New Bedford Symphony Orchestra has officially started. And while theaters are still shuttered around the nation on account of COVID-19, the organization has spent the spring and summer learning how to record and share music with an audience despite the pandemic.

The organization was impacted by the coronavirus almost immediately. They had scheduled a performance at the Zeiterion Performing Arts Center on March 14, which had already been canceled by the time the president declared a state of emergency on March 13.

Since then, the NBSO has reconfigured how it functions. Major concerts are offered online and musicians perform on social media or don masks and venture into the community at small pop-up events.

While most organizations spent the early days of the pandemic figuring out how to host meetings on Zoom, NBSO had to figure out how to produce and share videos. But the learning curve was quick. By March 20, their first performance was on the internet.

“It was different to transition to virtual performances,” said Conee Sousa, director of marketing and public relations for NBSO. “We had to figure out Facebook Live, and the musicians had to figure out the recording.”

“We’ve learned along the way, we’ve been tweaking things, and we’ve done the best we can,” she said.

Violinist EmmaLee Holmes-Hicks said her first virtual performance was a low-tech affair: just a microphone plugged directly into her cellphone. Since then, she’s invested in new audio and video equipment to achieve a better quality recording. It helps that her building is occupied exclusively by musicians.

“I already felt lucky to have a house where we were all musicians and friends, and we could practice and no one would complain. And now I feel even more lucky,” said Holmes-Hicks.

“We’ve turned our apartment inside out, cleared out the furniture and created a recording space.”

She said that, as strange and uncertain as the past year has been, the COVID-era has also pushed her creatively and inspired her to tackle new projects. 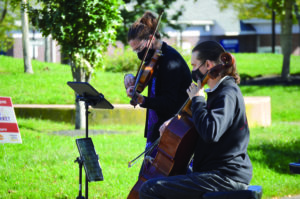 Throughout the pandemic, violinist EmmaLee Holmes-Hicks (left) has connected with audiences through home recordings published to the internet and pop-up events.

From March until early summer, she had only performed over the internet, but she eventually transitioned to outdoor concerts, which she plans to continue for as long as the weather allows.

These outdoor performances, she said, have been going well, save for the challenge of playing a violin while wearing a face mask.

“It’s tricky. The mask can get caught on my chin rest,” she said. “However, I do feel lucky that I’m not a wind player or a singer because, man…it’s so much harder for them these days.”

For its major performances, a limited number of performers actually play at The Z, and the public can access the recordings of these performances for $10.

At the moment, NBSO is ironing out the details for its popular Holiday Pops Family Concert scheduled for December. The plan, which is still in development, is to feature musicians performing throughout the area in festive locales.

“It’s such a tradition,” said Sousa. “People come to that concert year after year with their families. We didn’t want them to miss that. People will be able to watch it from home, and it should be fun with all the different musicians, personalities and locations.”

While Holmes-Hicks said it can be more of a challenge to feel connected with audiences during the pandemic, performing over the internet or at smaller venues still helps the public access music during a time when it may be needed the most.

“Music is a great tool to comfort people and bring some joy,” she said. “I hope that all these things are bringing comfort to people in this time – or just a moment where they can escape their thoughts and get into the music.”

For more information, and to listen to some music, visit the New Bedford Symphony Orchestra online at nbsymphony.org or on Facebook at facebook.com/nbso.newbedfordsymphonyorchestra.

The next show, featuring the music of virtual performance of Shostakovich and Dvořák, will be available online starting Nov. 21 at 7:30 p.m. The holiday concert is scheduled for Dec. 19 at 3:30 p.m.