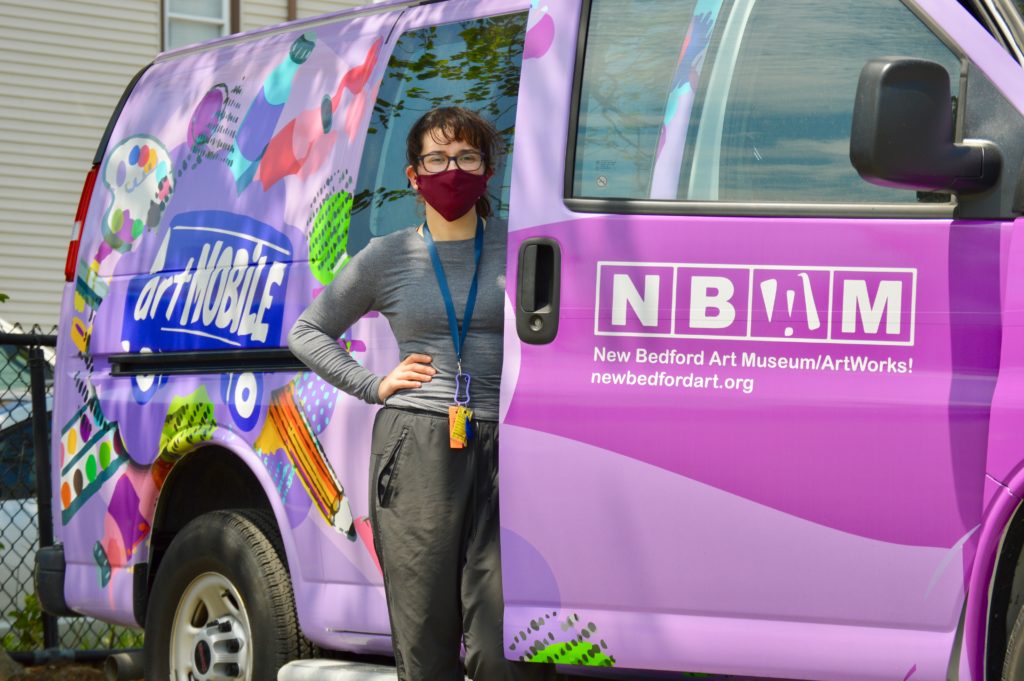 Tania Vasconcelos from the New Bedford Art Museum delivered printmaking kits on May 21 outside of Whaler’s Cove.

This article originally appeared in the June 2021 edition of Senior Scope. Article and photo by Seth Thomas.

Before Tania Vasconcelos could even park the New Bedford Art Museum’s colorful art van, otherwise known as the artMOBILE, people were already working their way through the parking lot at Whaler’s Cove to greet her and to pick up a new art project.

For five weeks beginning at the end of April, the New Bedford Art Museum/ArtWorks! (NBAM) delivered art kits to older adults in three locations in the South Coast – Oxford Terrace, Whaler’s Cove and Sol-E-Mar – as part of the new “Creative Care” program. Each week, representatives from the museum delivered a different art project, which included supplies and instructions translated in multiple languages.

The artMOBILE has been providing children with an on-the-go art education for decades. When the pandemic hit, the museum used the van to distribute art kits, which offered children self-guided projects to assemble safely at home. The Creative Care program provided older adults with a similar opportunity.

Sharon DeMedeiros, who said she’s worked as a decorative artist for years, has been having a blast exploring a new project each week. While she said that she’s been relatively okay during the pandemic, having a new art project each week has been a nice distraction.

“It’s been a little scary every now and then,” said DeMedeiros as she awaited her new art kit outside of Whaler’s Cove on May 21. “This brings your focus onto creative work, and helps you not dwell on negative things, so it’s had a great impact.”

Throughout the five weeks, the museum has provided lessons on watercolor, printmaking and ceramics. Vasconcelos, an art educator with NBAM, said she had heard from participants that affording formal art classes on a fixed income isn’t a possibility.

“This has been a great opportunity for people to enjoy art without the cost of paying for art classes,” said Vasconcelos. “Art should be for everyone.”

The Creative Care program was presented by NBAM in partnership and sponsored by the Association for the Relief of Aged Women, with additional sponsorship from the SouthCoast Community Foundation and in collaboration with Coastline. The museum intends to plan to continue this project throughout the year. For updates, visit newbedfordart.org.