New Bedford Art Museum/Artworks! Returns with an Eye on Safety 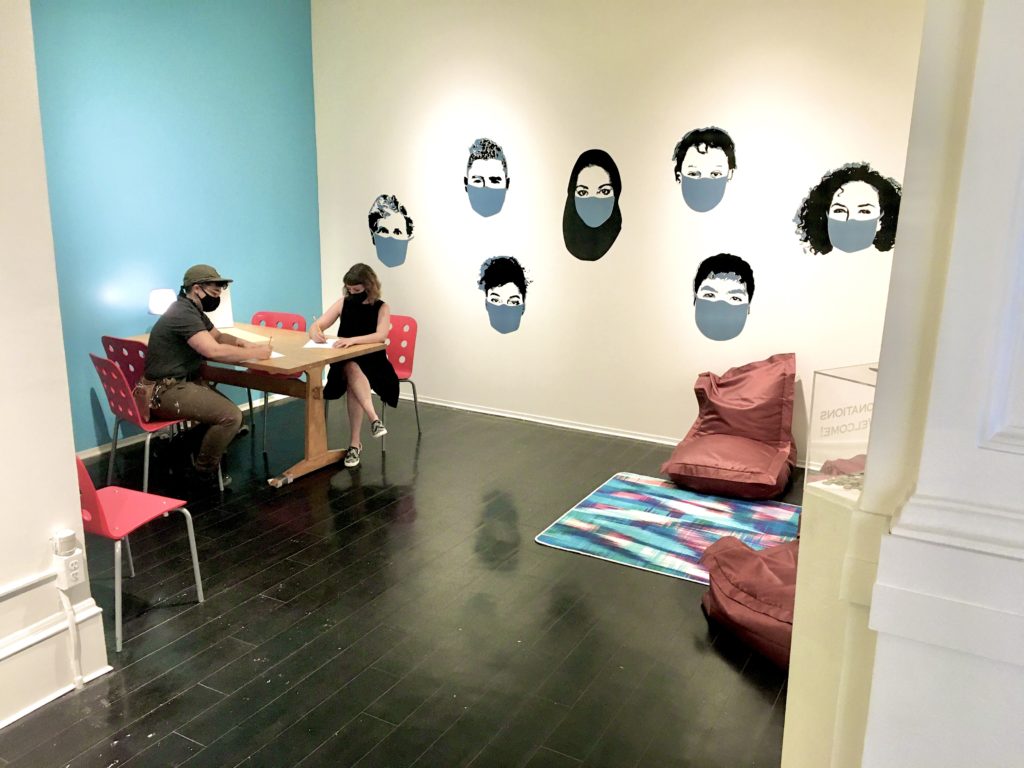 This article originally appeared in the September 2020 edition of Senior Scope. Article and photo by Seth Thomas.

Back in the first week of March, a small group of patrons were weaving through an elaborate art piece that was suspended from the ceiling of the New Bedford Art Museum/ArtWorks! gallery. The guided tour was for people with memory loss and their loved ones and featured lots of interaction.

Curator Jamie Uretsky would stop and ask open-ended questions about the vibrant contemporary art on display, and she would pass around various objects meant to simulate the textures featured in the works. This newspaper and a news crew from a Boston-based ABC affiliate were there to document how art appreciation can combat the social isolation that often burdens caregivers and those with memory loss.

And then, about a week later, the world changed. That story never appeared in this paper. The pandemic placed Senior Scope on hiatus, and New Bedford’s downtown art museum closed its doors.

But this summer, following some extensive modifications to the way it operates, the museum has reopened to the public.

“We can’t wait for people to come back and experience this space,” said Ashley Occhino, the executive director of New Bedford Art Museum/ArtWorks! (NBAM).

While some museums around the state opened their doors in July as part of the third phase in Governor Baker’s reopening plan, NBAM opted to hold off until mid-August to better prepare the space.

Arrows and signage now direct patrons throughout the museum, a smaller gallery toward the back where social distancing would have proved difficult was closed, and even the museum’s gift shop has been rearranged to create better flow.

To ensure the safety of its visitors, the museum now restricts its capacity to six people every half hour, which means that families would effectively have the place to themselves.

The works on display back in March have been uninstalled and replaced with a selection from the members’ show, a benefit exhibition that will support youth mentoring programs, and a room lined with pastorals from the New Bedford Free Public Library’s collection, among others. Exhibits and workshops have also migrated onto the museum’s website, and their YouTube channel offers artist interviews.

And for the first time, the museum’s gallery has dedicated large spaces to creating art.

Through the end of the year, NBAM is encouraging the public to take a break from the endless stream of COVID news by relaxing in its newly assembled “pop-up studios.”

During the pandemic, NBAM secured a grant through New Bedford Creative to supply visitors with art kits – complete with paper, pencils and prompts to get your started – at no extra charge beyond general admission.

“It’s a chance for people to interact and do something with each other while they’re here,” said Occhino. “The materials you receive in that kit are yours to keep, and you can take them home with you.”

The first pop-up studio is themed around portraiture, a nod to how the art form may look a little different in the era of mask mandates. The other studio will be based on the work of Soo Sunny Park. Both stations have places to sit and watch instructional “how-to” guides. Occhino hopes the interactive projects will give people an opportunity to unpack some of the stress that’s come to define 2020.

“Let’s be honest – it’s been a long six months. We all have stuff we need to work through right now,” said Occhino. “I want people to walk out of here feeling a little better about life.”

New Bedford Art Museum/ArtWorks! is open Thursday through Sunday from 10 a.m. to 4 p.m.

You can reserve tickets online at newbedfordart.org or by calling 508-961-3072. Tickets are $8 for adults, $5 for seniors, and free for children under 12 when accompanied by an adult. If you have an EBT Card, admission is free for two adults and three children.

Patrons over the age of five are asked to wear a mask. All patrons are asked to arrive five minutes prior to the start of their purchased time slot. The museum is located at 608 Pleasant St. in New Bedford.